Ticking All the Right Boxes

I imagine many of you are aware that I sell what I weave and so have an eye on my Etsy shop for what is running low and prepare warps with that in mind. I also weave something that interests me personally and so don't call myself a production weaver.   Going down that road is like turning weaving into a J.O.B.   I have no interest in that at all.

I get bored very quickly and so short runs of 7 to 10 yards are perfect for me.

I got to playing around in the stash closet and discovered I have some really nice coloured 10/2 cottons that are really rich colours.   It was a toss up between towels and runners, but runners won out and I wound 9 yards of Valley yarns black, shell, lizard green (now discontinued), golden ochre and eggplant.   The sett is 28 ends per inch. 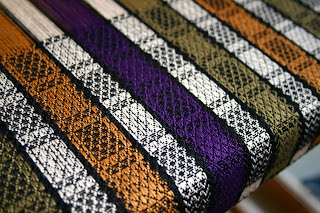 Here it is under way on the loom with black weft. The centre of the larger blocks can be as large as you'd like. This version shows two repeats of the required treadling as shown in the draft. 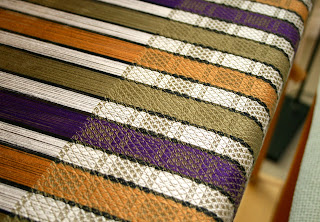 Then here's the lizard green as weft. It actually works quite well.  I wove one runner using the eggplant and a test run of the golden ochre didn't work very well for my eye and so was UNwoven quickly.  😳 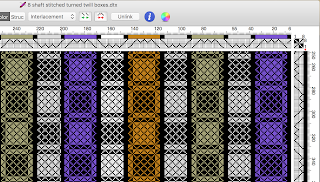 I found the draft at Handweaving.net but didn't make a note of the number (sorry)....    So weaving this project took a long time for a few reasons.    I got started well enough but soon ran into some tension issues, so after a runner was complete, I cut off and re-lashed on again.    Now the tension was just fine but the shed was misbehaving. It wasn't as large and I had threads out of alignment.   I struggled to finish a short runner and cut off once again.

We lifted the loom back up onto crates, and with the locking pin in place, I went through the tie up and checked the cord lengths.  Some were off by a hole or so and some treadles were too high over all.   I fiddled and tweaked and the next runner was woven much more successfully and I was much happier !

So now that this warp is all done, the plan is to thoroughly clean the loom and then slowly but surely make sure all lamms are level. Then I'm going to double check treadle heights and cut new tie up cords cut to the right length.   The loom was brand new in 2008 and so a tune up of this scale after 12 years isn't  too bad!   I also use a Woolhouse Tools commuter bench and so that will be cleaned and given a fresh oiling of the wood while we still have sunny days outside.

In short, I really enjoy this loom and don't want to fight with it.   I guess you could say it was crying out for attention !  😊    Simply tightening nuts and bolts isn't enough....

So here are some 'beauty shots' of the completed runners.   Yes, all the fringe twisting  took some time to do. 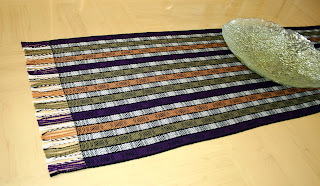 Black weft -above and below. 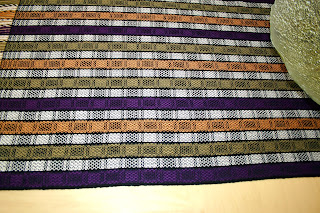 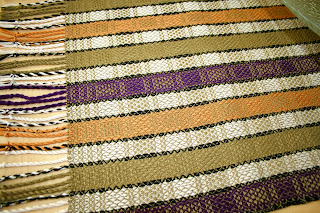 Olive green weft- above and below. 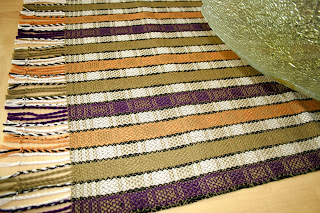 and finally.... eggplant purple weft below 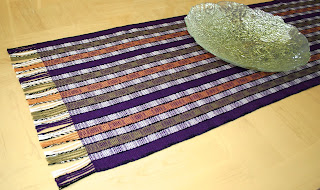 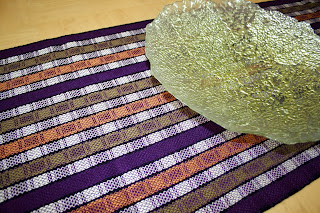 So before fall  and the traditional weaving season truly sets in, plan to make a list of what your loom's needs are so you can tweak away and get it in the best condition for your winter weaving.

I've heard some weavers wax poetic about the lovely patina the wood surfaces have ..... um, patina is just oils, dust and dirt  and that's all.  I clean my beater about once a month as its creepy how it can build up despite all the hand washing going on around here!

So the Spring loom  is naked for the time being and there are scarves under way on the Megado.   I have to wind some new warps for the Spring as well so there is always something on the go here.  But time is about to get precious here .... because.....

Puppy watch:    It seems we'll be getting our new little girl sometime around September 2nd, so have launched into acquiring all the items you need to have on hand. It reminds me of having a new (human) baby and carrying around vast quantities of diaper bags and  car seats and changes of clothing.   How can something so small, need so much??

The pups are 6 weeks old this Wednesday  the 26th and so we will be driving down island a week or so after that to get her. They release them between 7 and 8 weeks old.

Here are some pictures taken last week at age 5 weeks. They were introduced to an outside pen to get familiar with real grass and to check out lots of new smells!   Their mum is only nursing them twice daily now and they are being fed a special puppy food soaked in goats milk and so they will be getting puppy kibble soaked in goats milk to start with  here at home.   They are giving us full food recommendations and feeding instructions which we will follow carefully.

Still debating names.... but I  have my favourites of course.  We may end up waiting to meet her to see which name suits her best. 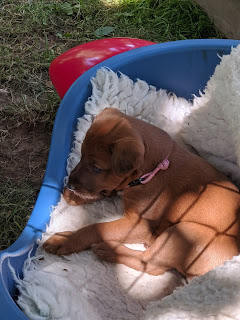 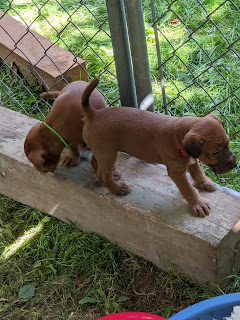 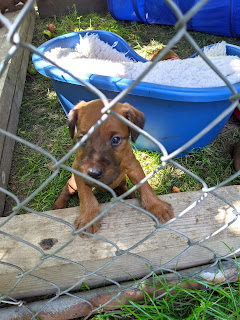 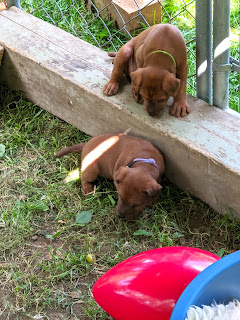 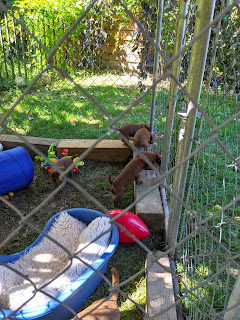 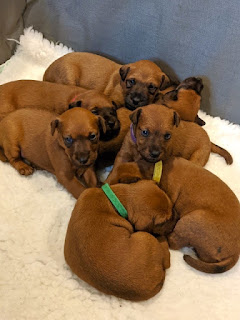 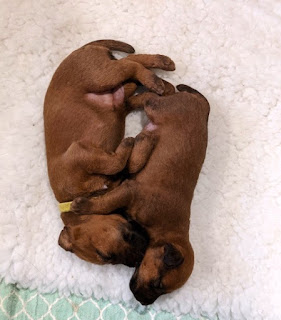 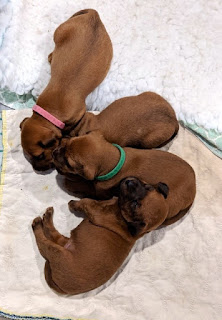 I think Mum Sienna is doing a fine job! 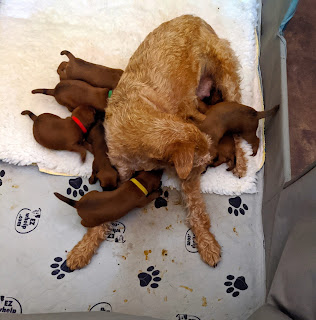 ... and a bonus three more pictures came in today August 9th....   ❤️
They are enjoying a drink of goat's milk in the bowl, and the pan are beginner potty training. They are going out on real grass today sometime.  If I get more pictures, I will add them here.   (Yes, I saw the gnawed wood ..... ominous!  😳 ) 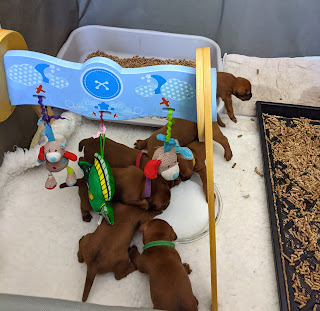 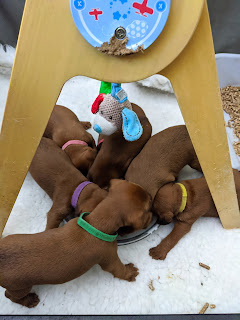 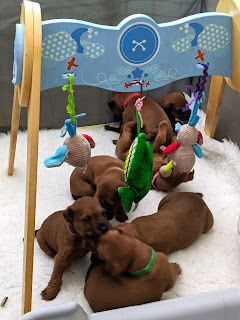