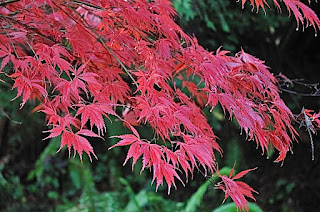 The signs are clearly starting to show.... summer is "done and dusted" and autumn is officially here.   As of October 1st we will have been here in our new home one year.  A year that flew by!   We have no regrets about our move to this home and simply love it.  We spent last winter looking at what needs to be done here and this summer we got busy and replaced some sealed window units, re-roofed the sheds (we had a leak),  checked our perimeter drains around the house (we get a lot of rain in the winter!), we're getting leaf guard protection on the gutters (no more cleaning clogged gutters and climbing ladders) and in a couple of weeks time we're getting some rooms painted to freshen them up. We already have a list started for some jobs for next year :  new kitchen sink and faucet, get one of two runs of side fencing replaced (a joint effort with the neighbours) and possibly more interior painting.  There's always something that needs tweaking!

After we recently went to Vancouver and saw the grand kids and returned home, I found my feet very painful again with arthritis and it hurt to walk, let alone treadle. So I took a rest and wound warps instead and wove when I could for short periods of time.   I'm waiting on  seeing a surgeon about my right foot, but the left is painful now too. Getting old(er) sucks!  So the studio has not been as busy as it normally is. 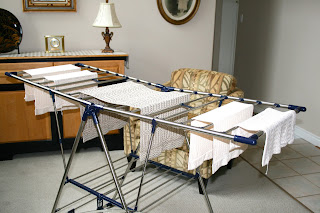 It seems I wasn't quite done with the last draft and tie up on the loom. I inherited a couple of 'seconds' over the years as table runners for our bedroom furniture but our night tables remained bare. This seemed to be a logical time to fix that and weave some up for our home.  I had the same warp and weft yarns on hand, the draft in hand and tie up all done.   They may not have been very long runners but they still had all the hemstitching!  In fact, it seemed like all hemstitching interspersed with a short run of weaving.  The day they were washed it was raining outside and so the rack was set up in the house to dry.

Tails were snipped, and then a hot time on the steam press and ironing board  and they were ready for some pictures.   There is also one longer runner that's 15.5 by 40 inches in length.  The warp is 10/2 mercerized cotton (colour: shell) , sett 28 epi and this runner was woven up with 8/2 tencel  (colour: taupe) 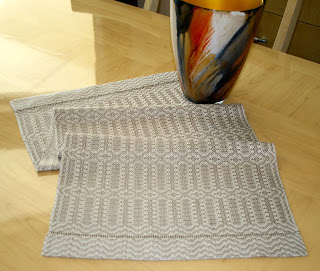 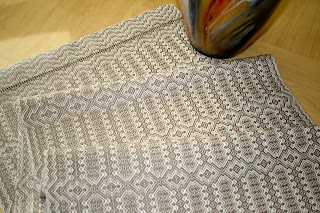 I wove two smaller cloths with the same shell mercerized cotton warp but used cream or off white 8/2 bamboo. This way they would match the existing runners in the room 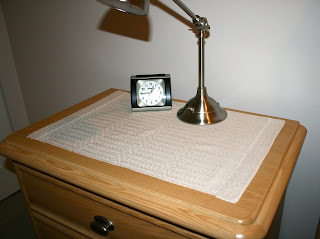 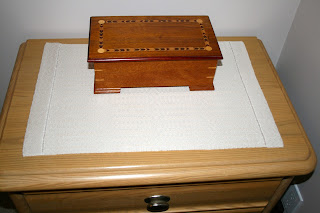 close up detail of the pattern 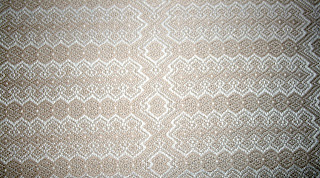 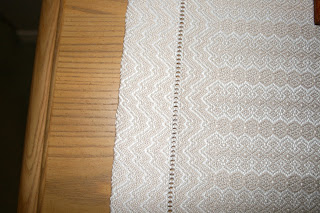 Bruce has a couple of small little end tables in his den that needed a little something too, so I wove these small little covers for them.  I find it rather ironic that I weave miles of cloth, but it took so long to do these small pieces.  "The Cobbler's children have no shoes". 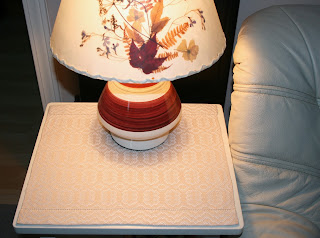 As you can see I reduced the pattern motif to fit the smaller table top.   The LED bulbs in the lamp are a rather warm white so I did my best to reduce the yellow in the computer. Now he can put down the cold beverage while he watches his Blue Jays baseball games. 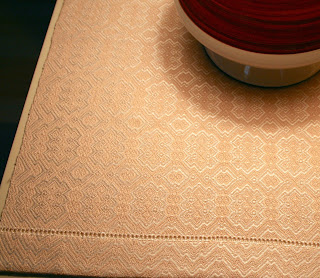 The older table runners are up high on a tall dresser and an armoire..... so the treadling error isn't on full display but do their job well.   Yes, that's me at about age two or three with my mother.... a long time ago now. 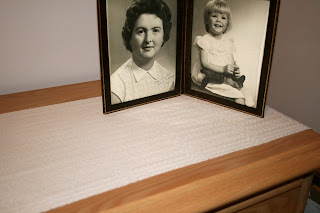 I held the camera up high and snapped these....  but you can see the new runners have good company.
We're all "matchy-matchy" now! 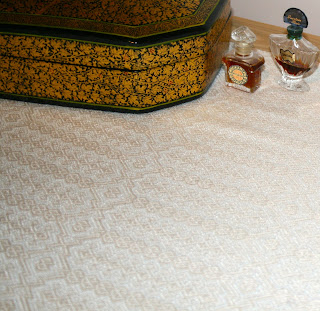 Some good news:   Two years ago today, I got a whole new left knee and while it was a tough recovery, its made a huge difference in my life! 🎉🎈 I have a 'birthday' for each one of my three artificial joints as each in turn resolved some painful issue  and gave me a new lease on life and, my main goal,  kept me weaving.

Email ThisBlogThis!Share to TwitterShare to FacebookShare to Pinterest
Labels: 10/2 merc cotton, 12 shaft fancy twill, 8/2 bamboo, 8/2 tencel, getting ready for Fall, Louet Spring, one year in the house, weaving for us 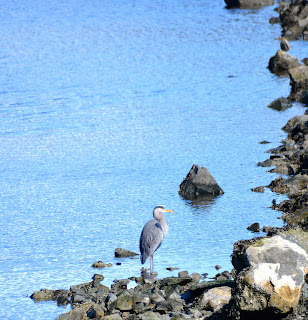 Waiting on the ferry and hubby took this picture of heron patiently waiting for a meal to swim by! 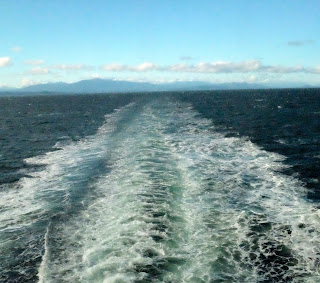 Heading to Vancouver and area and that's the island slipping away in the wake....  The ferry trip from Nanaimo to Tsawassen terminal is two hours. (We had reservations for both trips and it was a good thing as they were sold out)   The drive from Campbell River to Nanaimo is two hours also.... plus an hour once we reach the other side (if the traffic is good)  So five hours all told, one way. 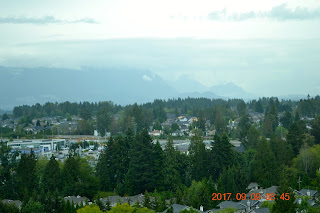 This was our view from our hotel window. Beneath all that cloud and smoke are the Golden Ear Mountains.   It didn't smell smokey from all the provincial interior forest fires (plus south in Washington, Montana and Oregon) but the visibility was very poor.  You are aware that's fine particles in the air you are breathing. 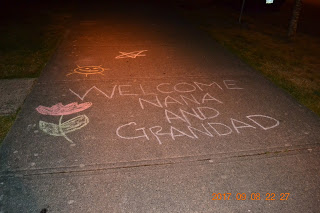 On Friday we found the chalk faeries had been at work and we found this greeting out front!  Grandad took a picture in the dark and good thing he did too, because the next day it was all gone with the rain. 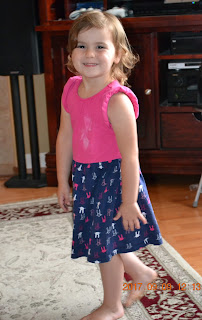 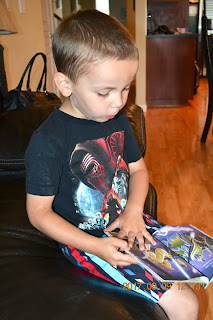 Ethan is five and a half and just started kindergarten, plus is in ju-jitsu three times a week. 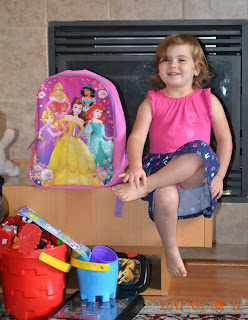 Grandad got busy with the camera and got some great pictures of them separately and together. 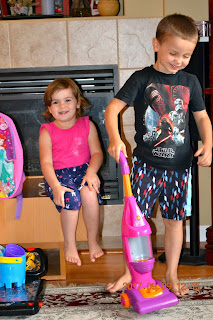 That's her little vacuum but he knows she can't make a fuss while the pictures are being taken. She carried it around to keep it away from him and I think I saw it going upstairs to bed later as well. 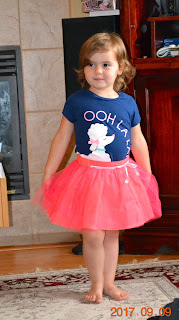 Then she had to show us her "Miss Ooh La La" outfit. 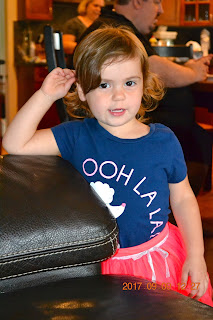 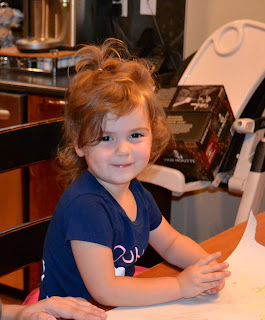 We also like to have our hair do played with and have 'piggies' added.  Just sweep up a bunch of hair and secure it with a small rubber band.  Did I mention she's two and a half?

Well she sure melted Grandad's heart!  She showed us all her dollies and coloured pictures with him: "Grandad, make a picture of a bird pooping on my brudder's head".... so he did!

I really enjoyed some one on one time with Ethan while she was napping and we talked cars, kindergarten and watched videos of him as a baby.  He sat still with me for almost an hour!  He's a high energy boy.

Then it was all over and time to come home.  Ferry ride home yesterday and then driving up island singing mostly on key and loudly to Freddie Mercury and Queen songs.

Today?  well that would be laundry, and after four days in a kennel, steering Calli into a bath to freshen up.

I was, and will be continuing, to wind some warps, carry on with the small project on the Spring loom  and mentally bracing myself for the crown prep work to come later this week at the dentist.

Fall is coming on fast here and we are starting to think of the end of season clean up in the yard and garden.    Oh, did I tell you that we plan to have the inside of the house painted?  Yeah, that's later this month and they will do the studio first.    Doesn't that sound like fun? 😳