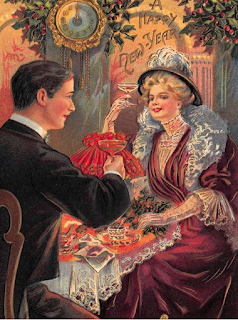 We have a bottle of pink bubbly to open, our dinner all planned out and movies on Netflix all chosen for tonight.  Yes, we're staying home.  Too darn cold and snowy to go out anyhow.

Do you make new year resolutions?   I don't anymore. I simply try to be better than I was in the previous twelve months, smell the flowers more,  and do more of what makes us happy.

I talked with my brother over the holidays and he, who goes to the gym faithfully and all year long, said that it was crowded there the other night. He couldn't get his workout done due the eager bunch that are starting the New Year early. I asked if it would be better near the end of January and he said no.... they last longer than that and usually by the end of March the herd has thinned out.

I think weaving is like that too.  Winter months and we make big plans to start weaving and have all these projects in our minds to do. Inertia and internet steal time away. First sign of sunshine, spring flowers and the garden calling and weaving wishes fade to the background.  Fresh air and getting outside is super after a long winter cooped up, but why does weaving time dwindle away?

I keep a notebook where I record all kinds of ideas such as interesting colours I've seen together, patterns,  someone I want to weave something special for and their interests, drafts, and yes, sometimes snippets of someone else's work.    I like to work on a project and fine tune a draft to suit my needs..... line up cones of yarns until they talk to me about who fits together better.   Once I have the draft tweaked, yarns chosen, I get started on winding the warp.  I hang it up and keep the project notes handy.

I will weave for a spell until my foot hurts and I need to rest it and then work on another project to build.  Finding the right draft, the right colours, the right yarn is all part of the fun for me.   It also means that the projects are waiting to go onto the loom as soon as its cleared off.   So no naked looms!

I don't put things away to sew later either. I do them now while everything is fresh in my mind.  Samples, project notes and critique are all done while the iron is hot  (sorry, I couldn't resist that one!) It helps keep twisting fringes interesting if there's just one or two scarves to do rather than a pile of ten.   The project notes are better as I combine all my notes to myself from the loom into one record.

It clears the slate as it were..... much like New Year's Eve day.   The weight of the whole year hangs onto today and tomorrow,  January 1st,  2018 is a new clean slate.

I plan to consistently weave through out the year when ever possible and not get caught short by: no warp on the loom, and nothing planned, and no warps prepared.

So whether you have a rigid heddle, table loom or floor loom.... "keep one on, one waiting and one being worked on", and above all have fun with your weaving!

Don't stress about 'dogs on the looms'... cut them off!   Its just string.
Stuck in a rut?   Buy a new book, join a guild or sign up for a workshop.
Loom isn't behaving?  learn how to tweak your own equipment or simply sell it and move onto a new love.

Do you recall how fast this year went by?   So weave with the 'good' silk, try linen for heavens sake and above all, use ALL the shafts on your loom.

What are you saving them for?    Tick tock, tick tock! 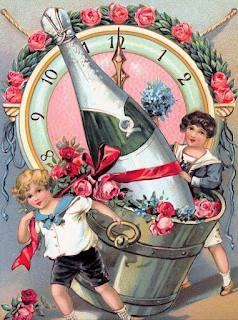 Its not resolutions you need but resolve!

Have a wonderful New Years Eve where ever you live....
Posted by Susan at 2:50 PM 2 comments: 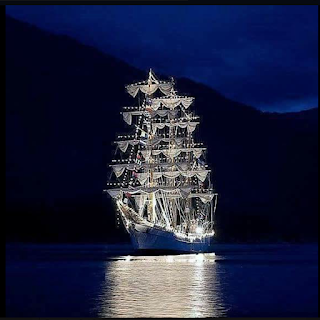 I love the tall ship gliding calmly over the waters in all its glory.   Its lighting up the dark as we end the year.   Its been a frantic year filled with fires, floods, wars, mass migrations, and a planet in decline.......then there's the  malicious politicians who have worked to divide people physically, mentally and financially.

We need light to shine on dark things and we need calm waters ahead.   Take deep breaths and perhaps spend some time each day doing something quiet (may I suggest weaving?) and simply enjoy what you have.

I would like to thank my readers for following along all through the year, and wishing you all a very Merry Christmas!

I'll close with a recent picture of our grandchildren who are growing up much too fast!
Ethan 5 1/2 and Madison 2 1/2 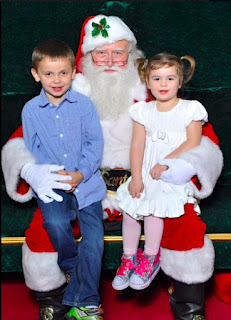 New Addition to the Studio

Meet the new kid on the block

Tall, very quiet,  works long hours with no complaints and in fine physical form..... meet Judy.   My friends Lynnette and Ngaire   of Dust Bunnies Under my Loom  traveled down to Victoria to a shop selling fixtures and all the extra do-dads for displays and agreed to picture her up for me.

I already have a Madge and she is well settled here and gets the prime display: 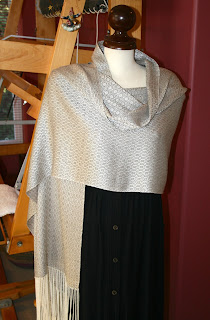 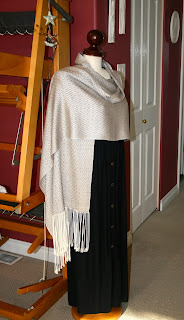 She is the official greeter as you step in the door.   Just so there are no hard feelings, Judy is tucked by the printer desk and is relegated to wearing a scarf.  Despite the lack of clothing she is quite modest and has no butt,  lady parts or over endowed.  She also has the narrowest hips I  never had at any stage in my youth!    Lynnette told me that the sewing shows call the mannequins "Judy's"... so whom am I to argue?

Our dog Calli got quite the surprise and growled at her as an intruder!

That's as high as I could get the 'swirl' to go.  That's my meager scarf inventory right now and I have them set on every second section.... and there are 29 balls between sections.   I'm hoping to get them out for viewing rather than be all folded up and in a plastic box.

I have been mulling over my options and have some ideas I'm thinking through..... and no matter which ones I choose, I need to get weaving! 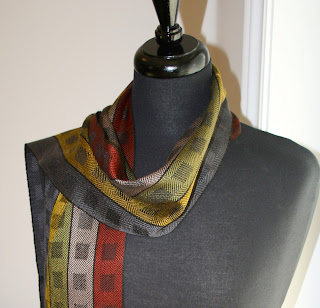 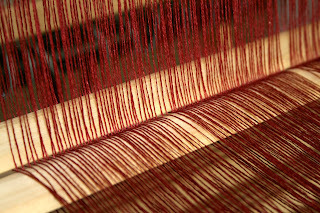 So after a month of total upheaval, paint cans, drop sheets, along with vacuum cleaners and floor mops, we are finally back to normal!   There are a few pictures to re-hang but the worst is over.   The six rooms look great and really freshened up... visibly brighter with fresh painted ceilings.

Its taken time to do a thorough cleaning of the rooms, and then the rest of our space since everything was crammed every available spot and then some!  Think spring cleaning but late November instead.

Then we had to catch up on life, pay bills, see doctors, dentists , write Christmas cards, get gifts for the grand kids ready to mail away....  and get back to weaving again! 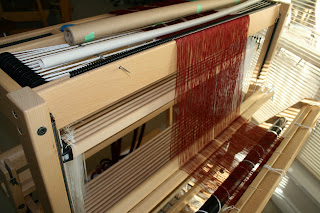 This is 9/2 French linen for some runners. The colour is new for me and is called brick. Its a coppery red and quite smooth and shiny.   The  eight shaft draft is a new one and I'll show you that later when I have some weaving actually going on. 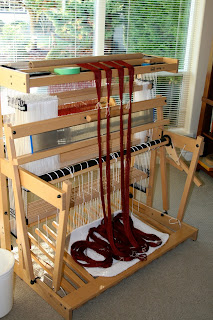 The rearrangement of the studio has given me much more room in the sunny alcove.  Its much easier to load a warp or lift the loom up for the tie up's. 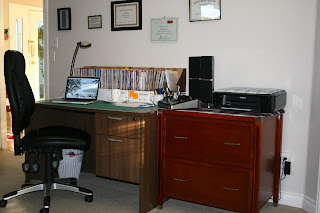 I lost my sewing table and my serger and sewing machine are tucked away into an overflowing closet. That's a challenge for another day.... sorting out the closet into a more manageable mess!    I use the serger quite often and so that presents a problem.  My old desk was a cheap particle board thing that has been around since the late 1980's  and has been recycled.   I bought a gently used desk and even with my Handwoven collection across the back, there is oodles of room. I'll just bring out the serger and set it up on the desk when needed.  I also inherited the family's file cabinet. It makes sense though for when I do up bank statements and such.  I can put my iPod tunes on top and my printer too.  (looks much better than our bed there in the last post)

By the end of this afternoon when I left to go and have supper, after Bruce helped me beam on the warp, I had 25% of it threaded.  Feels real good to be back in the saddle again!   This Christmas thing might slow me down a bit.   🎅🏻🎄