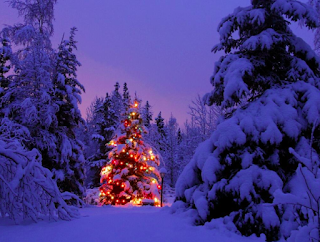 Christmas preparations are well under way.   I see lights every where, homes with trees showcased in the living room windows and traffic is heavy on the roads as everyone dashes to and fro.

We'll be staying close to home for the holidays, just hubby and me!   Our time with the grand kids will happen after New Years when things quieten down a smidge.   Its all just fine with us as we don't get too cranked about Christmas anyhow.   Its an awful lot of pressure on a young family for one day and so we actually prefer to do it at a quieter time.

Our daughter in law sent us a picture from a recent photography session and they are making selections from the professional's cd to purchase.   So the copy I have (for now) has their watermark but its still a great one of the grand kids.   So here are my little darlings!   Ethan (3 1/2 years old) and Madison (nearly 10 months old). I want to know how they got Ethan to sit still that long! 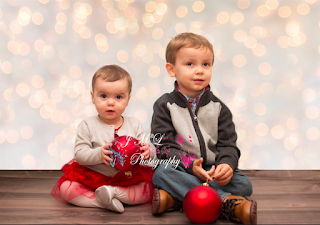 As of now I have completed sorting all photographs from the Family Collection. Boxed up anything not being done during the scanning phase, such as negatives and slides.  Its become more compact but still is a sizeable lump in the studio.  But its a far cry from ten box loads it was three weeks ago! 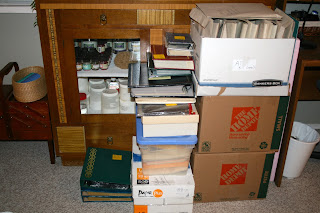 To be fair, the two Home Depot boxes are full of negatives, slides (to be viewed and done later) and a lot of scenery and travel shots that won't be done for a *long* time. The main portion is the envelopes top right and the stack of albums from the blue lid and up.  The plastic box with the blue lid and down are full of documents which will be used for genealogy and the ongoing family tree at Ancestry.  Most of them will be scanned as well to be part of the permanent record.

I'm researching scanners and various on line articles on how to do this project right the first time. Its looking like the Canon scanner we have is likely suitable for the job.  Now wouldn't that be nice?

So the anniversary date of when I first started this blog is coming up on January 8th. Its hard to believe that I've been at this for eight years!  Some of you have even been following my antics for all those years too.  (big warm thank you!)  Some of you are newer to the blog and enjoying reading older posts.  I've heard from many of you via email, become fast friends with many and had some even come to visit me.

This is when I like to do a 'give-away' to readers as a thank you.  This time the gift is a recently completed huck lace guest towel ,  of 10/2 mercerized cotton and with a fine bamboo weft.  It features extensive hemstitching as well.   Now I must admit that its not entirely perfect and is what we call a second with a treadling error. Its still lovely and only weavers would know.... your house guest will never notice as they dry their hands.

**Please be very clear with your name and an email to reach you.**

I will make the draw by old fashioned, well stirred  "name in a hat" style and announce the winner on January the 8th.

In the mean time, the good news is,  I am back to the looms once again!  I have made a good restart and it feel great to be back on the bench again.  This break away from weaving has been beneficial in a few ways in that my knee has had better time to heal but I was still productive every day, and now I can get back to the looms feeling energized and ready to start the new year!

I have been weaving for a time most afternoons and I'm happy to tell you that I have completed one scarf and started another. Plus I have two towels done on the Megado.   So I'll keep on and hope to have some show and tell for you some time soon!   Here are some pictures: 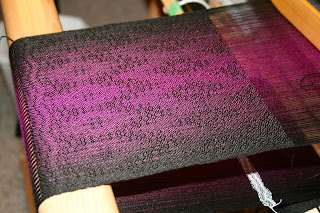 An eight shaft elaborate point twill, woven "network style". What you can see there is one repeat measuring 7 1/2 inches. 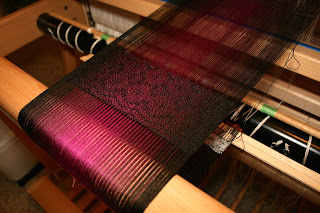 I've shown this one before but it does show the scarf being "treadled as threaded".  I had wound the warp forward to start the second scarf and suddenly realized I had forgotten to take a picture!  I was feeling pretty good about finishing one scarf and eager to start again! 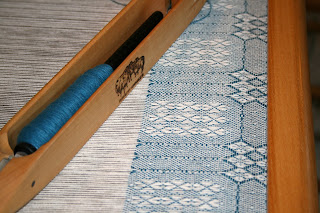 Purple and teal towels done and I'm moving onto a pretty shade of blue cottolin next!  I'm having fun again... 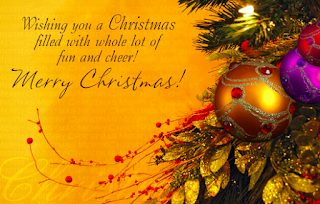 I'd like to wish you a Happy Winter Solstice, Merry Yule!
and Io Saternalia!

For the more traditional of you out there, Merry Christmas !  We hope you enjoy time with family and friends and no doubt there will be good food and lots of it. I hope Santa brings you some yarn as well as other goodies!

I hope 2016 is a healthy and happy year for us all. I know that I'm sure looking forward to seeing happier times and definitely more weaving in the weeks and months ahead!

Remember to leave a comment for an entry into the draw for the guest towel give-away January 8th!    I will be back with a New Year's Day post about what is on the loom AND  my annual studio year in review....

Smiling Through The Tears 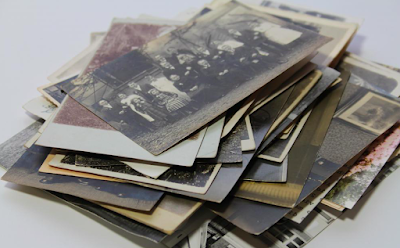 I recently received ten large boxes of family documents and photographs. I had volunteered to organize and eventually scan them into a digital format, and then share them with family.  I knew it was going to take some time but I had no idea of how many photographs there were! Turns out that there are all my parents pictures, my paternal grandparents, maternal grandparents and two aunts and their marriages. Also my Dad's entire Royal Navy career and tours of duty.  We are the 'end of the line' for so many family members.  Its all rather sobering....

I had some large brown envelopes on hand and simply started sorting pictures into family groups, countries, time periods.  In time I had a large box filled with paper and recyclables and another with plastics and garbage.... and have been down the proverbial "Rabbit Hole" for roughly two weeks working my way through the boxes and many albums. Its quite addictive! Besides getting the organization started, I wanted to reduce the sheer amount and bulk of the collection down to something more manageable size wise for storage.   You see, all those boxes are in my studio and I can't move in there!

Its coming along just fine. I have separated out all scenery and non-people shots and they will be stored and done at a later time. All negatives are securely stored; all documents together by family.  Its been reduced down to something I can at least move around now! You see, it all must stay accessible for some time and in my studio space until its all done and concluded.

Sometime after Christmas I hope to get a new scanner and work out a real plan.  Right now I think scanning one family group at a time and then release them via the Cloud to family here and overseas as they are done so they have something to  view while I work on the next batch.   It will be a long slow process and I reckon two years? Maybe three years?  The documents will be invaluable when it comes to updating and building parts of the family trees on Ancestry!  Some scanners can take six minutes to do a full resolution scan.   The pictures below were scanned by my father... 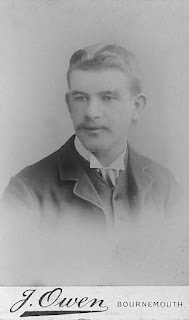 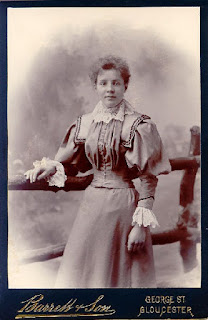 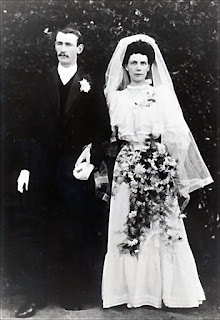 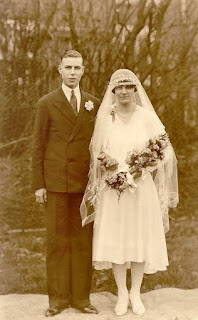 One of their daughters, my grandmother Louisa Barton and my grandfather Reginald Waterfield.
1930. 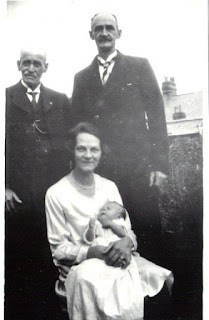 Great great grandfather Alfred Barton, his son Edwin Barton, my grandmother Louisa and my father as a new born infant on her lap. 1930. 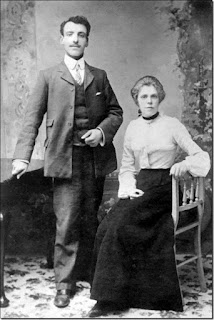 My paternal great grandfather Alfred Waterfield and his first wife Ellen Shaw. They had three young sons and one daughter. Ellen died in 1912. 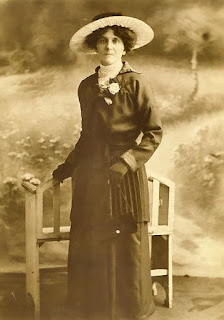 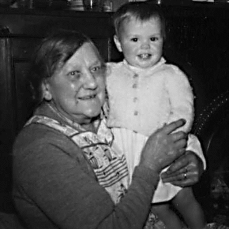 Here is Elizabeth (Fryer) Waterfield holding me in 1956 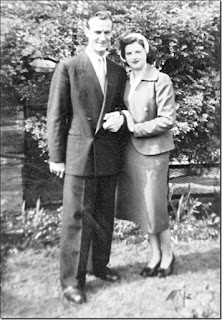 My parents after their wedding ceremony in 1954. 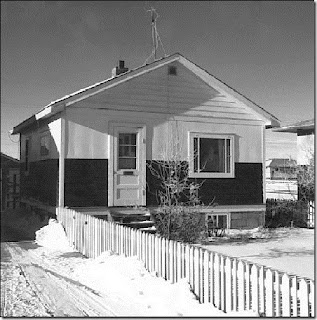 Their first house in Saskatoon, Saskatchewan in 1960. They arrived just as winter was starting. What a welcome to Canada! 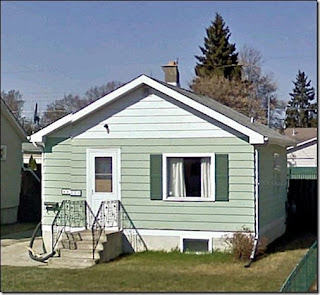 The same house today taken from the internet.  My bedroom was the small window below the picture window in the basement. Yes, the house was tiny! 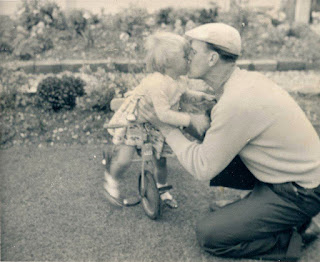 Dad and me in 1957 in the UK.
Its all so bittersweet and I feel the real need to do this right now, so my looms are waiting for me.  So I have been spending time with my big family every afternoon lately.

Knee Report:  I have been released from physiotherapy having reached the goals they set for me! I still must do my exercises daily otherwise the knee / leg stiffens up and my bend is reduced. I get swelling daily by mid afternoon.  Its normal and comes from being upright and using it.  Elevation and icing it is how I spend most evenings.   There is far less pain, no nerve pain jolts as nerves heal and fire up again. I take some pain meds still  and will for while yet according to my surgeon. I saw him last week for my 8 week check up and he told me that two months is considered *very* early in the recovery process.  Real improvement will come at six months to one full year.  My next visit with him is next September at one year post op.

Speaking of one full year.... my new right hip is one year old this coming Friday December 4th!  It hasn't been an issue for me for at least half a year, but they say healing continues for a full year post surgery.  And what a year it has been! 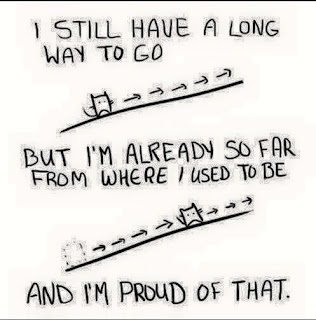 Some fibre news to share:  I have been bombarded with emails from various yarn companies encouraging me to "buy, buy, buy" lately as I'm sure you have too. Today I finally broke down and went and took a look at one, Webs, to see what was truly on sale.  I was browsing and not really finding anything calling to me.  I have lots on hand and was about to close out the page when I spotted something new on their 8/2 tencel page..... new colours!!! 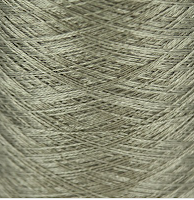 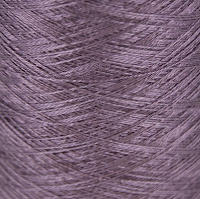 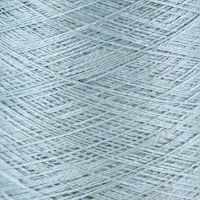 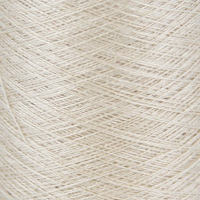