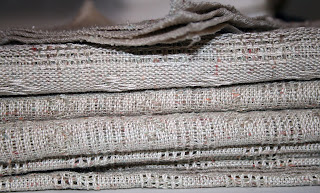 I have a nice stack of new handwovens off the loom! Remember the project with mock leno and warp floats? Well, it's now a stack of two full runners and two smaller side table cloths, plus four generous samples for swapping with friends. I was given a handrawn draft for this pattern from a friend but I now understand that a version of this appeared in a Handwoven magazine years ago. I don't have it in my collection, but I'm reasonably sure that I have made alterations to the draft and used my choice in yarns. I finished weaving this warp yesterday and released the tension over night. Today I was happy to see the pattern had really appeared and took it off the cloth beam. I spent time today using the serger and securing the edges: 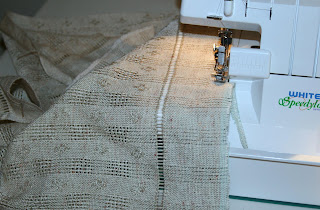 This picture shows both sides of the cloth. The side I looked at during the weaving has the cream warp floats; the underside has green blend yarn weft floats. If the hemming is done neatly and by hand up to the hemstitching, the cloths can be reversible. 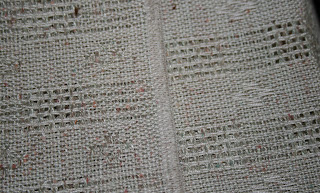 I took several shots and managed to get one where the areas of lace and floats show nicely. The 'lace' is actually a three thread huck emphasised by empty dents in the reed. I'll show you a final picture of the runners after washing and pressing. I think they will turn out quite nicely. A runner and a small cloth is for our living room and the others are for the sale box. The samples are for weaving exchange that some friends do from time to time. We make up a record sheet using our weaving programs along with samples of the yarns used and any notes that may help someone in the future to weave it again. Stuff like beat light, denting and reed recommendations. What you'd do different... or what you like to try next time. Perhaps baby blanket next time instead of table linens? You get the idea... 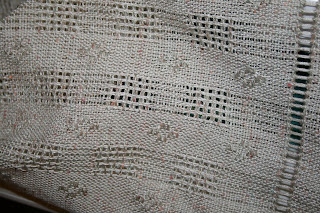 We will be away for just under two weeks, leaving after Labour Day for a little trip to BC's Okanagan Valley. I plan to prep the hems and hand sew them 'on the road' as something to do. Reading while moving in the car is *not* a good idea for me. We'll see how this goes as a replacement activity! I'm going to look up some other projects to take along like my small beaded wrist bands that sell well at Christmas sales. (yup, I used the C word!)

So I was also busy today winding on a 2/16's warp for the GCW weaving exchange and so tomorrow I will be threading that. I'll bring you up to date on this new project in my next post which I hope to upload before we go. I need six guest towels for the exchange and I've put on an eight yard warp to do an even dozen towels. I need to recharge my sale and gift stash!

I leave you with a picture of a wee chenille sweater that a friend made and sent to me as a gift. It must be two to two and a half inches across through the arms. The coat hanger is also hand made too. It's really sweet. 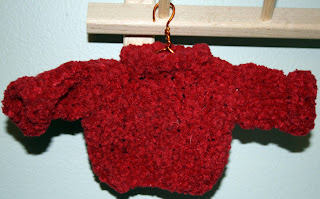 The lace has turned out just lovely.

Susan:
The fabric you wove is wonderful. I love the lace and the flowers!!!!! The sweater sure is cute. Woudn't a whole Christmas tree decorated in those be fun?

Oh weird- I just blogged about my frustrations at making a tiny little knitted sweater in my livejournal the other day! It looks like the pattern from my Harry Potter knitting book: Charmed Knits (don't judge!). Except I gave up on mine and went back to crochet ha ha.
So cute!

That lace is beautiful!!