I love linen....the smoothness of it, the sheen, the cool touch. 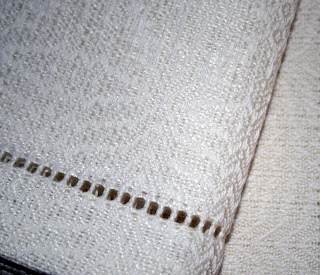 GCW stands for Guild of Canadian Weavers and my friend Lynnette is the weaving exchange coordinator. I got my parcel in the mail a few days ago and what a treat! I submitted six towels and received six back, out of the nine participants. But we receive information sheets on all nine and Lynnette also produced a CD with all data and photos for every participant. Very professional!
The terms for the exchange are quite generous. We will find out early in the new year what the new weaving exchange idea will be and then we have until October 31st to send it in. Lots of time... We send in a cheque to defray postage costs and agree to produce records of the entries for each item we mail in. So far the exchanges have included: full sized tea towels in a registered tartan, greeting cards with woven inserts ( see them here Dec.9th entry) and this year, the guest towel. The exchange was started to have actual weaving happening within the national guild and to commemorate the Guild's 60th anniversary. I was president at the time and thought it a great idea and it seems to be one that is now benefiting all members as paid up members have been receiving a photographic record of the previous exchanges. As one company says "membership has its rewards!"
The white towel on the top of this entry is one that I wove and chose to keep as a record of what I entered. It's a fancy twill using a 2/16's cotton warp, sett 36 epi and most of the towels I wove had various linen wefts; some had mercerized cotton. 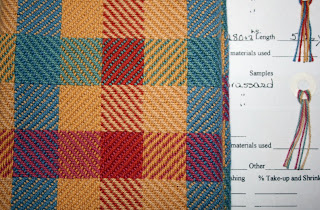 This towel was woven by Yvonne of Prince Edward Island and she calls it her 'country hand towel'. It's a delightful mix of rustic colours, 2/8 cotton, in a turned twill. 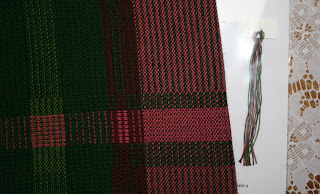 I thought of you Peg when I saw this one! It's crackle in rich tones. It was woven by Chantal in St. Gilles, Quebec, using 2/8 cotton. My husband really likes this one. It brings up the interesting talking point about why men won't use a hand towel, particularly if its white! But I think mine would use this and the country towel. ( so why not use soap and you can dry your hands on any colour!?) But this topic has come up elsewhere also and became a challenge for the next weaver. 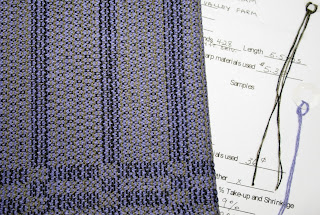 This 'men's guest towel' was woven by Norma of Windsor, Ontario. She used 2/16 cotton and 2/22 cottolin for weft in this 'turned taquete'. Norma has completed three of four levels of the GCW master weaver program. 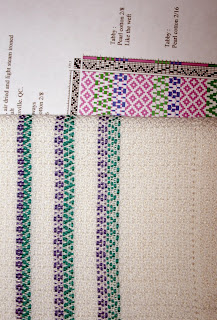 Blogger has turned two of the pictures and no matter how many times I try to reload, they come sideways! ( if anyone knows how to stop this, please let me know.... thanks) The pretty towel above was woven by Genevieve ( who I *think* lives in Quebec) using a rosepath threading. She used linen and 2/8 cotton in the warp and mercerized cotton weft. 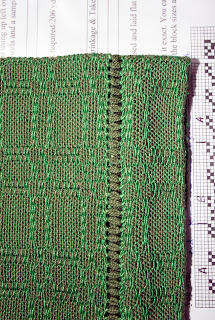 My friend Louise wove M's and O's using 2/8 cotton warp and a 2 ply line linen weft in a Christmas green. Louise has completed three of four levels towards her master weaver with the GCW. She has the hardest level to do next but I have no doubt that she will do it. 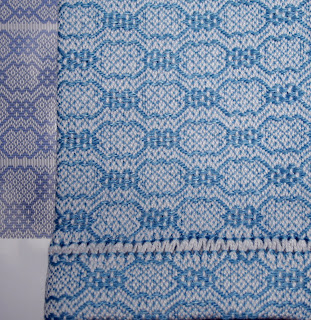 Last, but by no means least, Lynnette's guest towel with cottolin warp and doubled singles linen weft in a pale blue. The pattern taken from 'Worst's Foot Treadle Loom Weaving'. An old stand by that is just as relevant today as it was in the 1920's. I have personally used this draft for towels some years ago and they were snapped up at sales for Christmas's past. Lynnette has completed two of four levels towards her master weaver. She too will reach her goal and most likely well ahead of me.

Hubby and I are off tomorrow for a dinner and theatre package and will be seeing a live play called 'Having Hope at Home". It part of our Christmas gift to each other this year. Should be great fun and I'll share how it went next post.

Tag your it! I just tagged you for a meme. You can see the details on my blog. Hope you are doing well. Duncan seems to be a good fit for you. Your weaving looks incredible!

Thank you for showing us the towels, including your lovely one. I know I saw the ones before that you wove, but it's nice to see it again. I have had no trouble with Blogger doing strange things to my photos since I started using a blog writer and publishing from it. It's called Windows Live Beta, and if you Google that it should bring up info and a place to download. I've used it for maybe 6 months now and have been very very happy with. I've tried others, but this one really works well.