May I Introduce You to....Jane 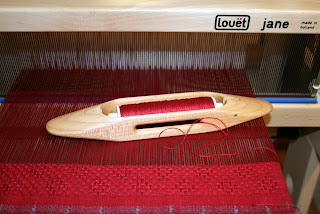 A few days before Christmas, and just ahead of a snow storm and bitter cold weather, my new Louet Jane loom arrived. The new 8 shaft / 16 inch wide table loom was preordered back in a warm and sunny August while on a trip to Salt Spring Island with friends Lynnette and Michael. We came home from shopping and found the Louet box sitting on the front step and we hustled her into the house. I never did take any pictures of the box, the incredible packing job or the loom's assembly. It never crossed my mind as I was totally focused on getting her parts together and juggling Christmas preparations all at the same time ( and also during that time we had no water for 3 to 4 days and so other things did take priority!)

I had ordered a stand to make her more user friendlier at home and at workshops and glad I did. I use an office chair on rollers and the ability to adjust the height of the chair is perfect. Jane only came with 200 heddles which struck me as a bit low for an 8 shaft loom even if it is only 16 inches wide. I ordered more heddles and waited for them to come. Once they were on and Christmas was past, assembly was completed and I started thinking about her inaugural warp. The recent woven Christmas cards had me fired up to do something for next Christmas, so I searched my stash for something suitable. I found a cone of fine bamboo 12 in a glossy ruby red that bought from Laura Fry's booth at Fibre Fest in 2006. I wound a short warp of 2.5 yards, sett 36 epi, to weave up a fine 8 shaft huck lace diamonds. It was planned to be just 5.5 inches wide and 200 ends. This is where the first error happened. I needed to count only 100 ends on the top of the warping board peg, but I kept winding till I got to the full 200. I had just doubled my warp width. Okay, now it's card inserts plus a couple of finger tip towels. No biggy. 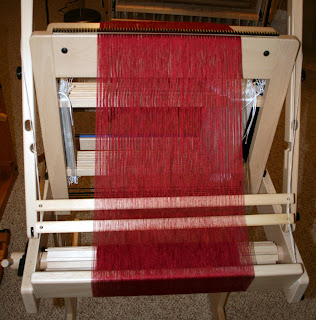 In this picture the warp is wound on using the built in raddle on the top of the loom. The cords are tied to the tops of the beater arms, the the levers in the front depressed down to be out of the way. It went well and was a simple procedure. The warping instructions (and video) are well done

Then you flip the beater over the top to the back and the front is now all open and ready for threading. I moved the cords supporting the lease sticks down a bit lower, and threaded with the shafts raised up to lift them better into view. 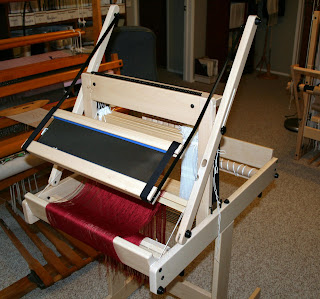 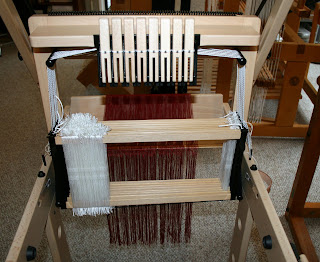 This is the front view. With the beater and reed over the back, the loom did seem a bit unbalanced due to the weight. I could have removed the reed, but I simply placed a foot on the top of the stand's cross beam and it seemed to be more comfortable for threading anyway. (I've left the ends of the shaft cords a bit long until I'm sure of their height and position. Then I'll cut and seal the ends as you normally do with Texsolv cords.) Here's the back view: 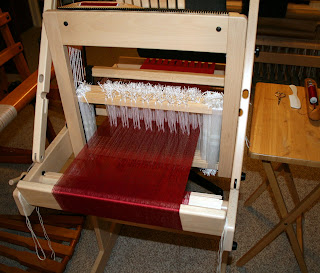 This is where the second and third problem happened. I took a long distance phone call and lost my place in the threading draft. Thought I had marked it but apparently not. So I ended up rethreading back to the original plain weave border at the start. Threaded again and ran out of heddles before warp. Still short! ??? Then I discovered I had doubled the plain weave ends from the planned 12 to 24 at the very start. Pull all through again and on the third attempt, I had success. But would it pass the error test when I threw the shuttle with some scrap yarn?
Now, you flip the beater assembly back over and prepare to sley the reed. In this case Santa brought me a 12 dent reed (the loom came with a 10 dent reed) and I tied it off with soft cord to immobilize the beater and sleyed three ends per dent.
I wove some scrap yarn and then made a small start with the fine bamboo. The lever action is nice and the cords run over rollers and pulleys. There is a small shelf on the top front of the loom for scissors and tape measure, but still pulled up a TV tray table.

No errors to fix! I love the sheen the bamboo has....
As to the other looms: the Louet Spring or 'Lilibet' is patiently waiting for me to resume the double weave sampler. It will need concentration and to be woven all at once for a consistent beat.
On the Woolhouse countermarche or 'Emmatrude', I have just completed the fourth and last scarf of the 2/10 tencel warp and now weaving some samples to share with friends. The last scarf I used silk yak blend from Treenway and it was by far finer then the tencel weft or even the silk cashmere. The colour is a beige grey and lack any fuzzies that the cashmere had. The smoothness and sheen of the silk yak blend is *very nice* and I plan to use it again (and order more!) It's hard to see the colour here but it has a more masculine appearance for the darker weft. The overall pattern is smaller as well... tighter. 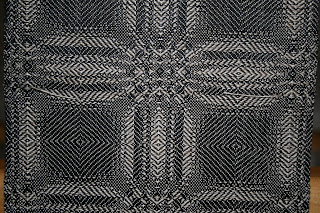 Last, but not least you will notice that I like to name or personalize my looms. The table loom is a Louet Jane but in my home she'll be known as 'Cricket'. Check out her *legs* 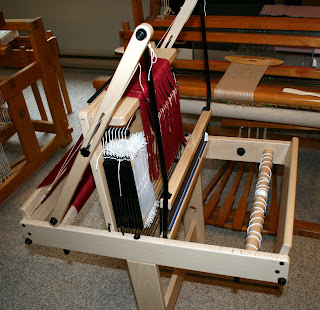 That's the old counterbalance in behind and she's up for sale. I need the room and she's simply too big for what she does and how many shafts she has. It's like I brought home the new puppy before the old dog was ready to retire. I'm sure we'll all get along!
Posted by Susan Harvey at 10:34 AM

Cricket looks fabulous; I do envy you!

Congratulations on the new arrival - she looks very sweet! I wish you many happy and productive hours together.
Judy

She's a cutie!!! Thanks for the pics of how you warped her. It's cool how she flips around into different positions!

Purty bamboo fabric! Of course all looms and wheels have names. So do cars and computers. Totally normal.

I received my heddles for the Jane loom from Jane Stafford in the mail today so your post is very timely and inspiring. I can't wait to get crackalakin' on mine and catch up with you!

I love that gorgeous red fabric! It's beautiful.

A quick question, if you don't mind: how many extra heddles did you order? What is reasonable for a loom of this width?

Thnak you everyone for your kind comments!

Patti: If the table loom is only being used for narrow widths at workshops, you could get by with 50 per shaft (but be prepared to move some) I would say 75 per shaft is far better. I like to do fine threads and also like the option of having heddles to spare so I have 100 per shaft. In this current project I have 400 ends over 8 shafts, for a 10 inch wide project. Shafts 1 and 2 carry the load of 126 and 123 heddles and so I had to move some from the back shafts. It went well and no mishaps. I will most likely leave them there as many patterns are heavy on those shafts. (I also plan to do some Bronson lace and Swedish lace.)

Thanks for the information! I bought a "Jane" and some extra heddles and am trying to figure out what makes sense (and if I bought enough heddles!). Your photos of the assembling her are helpful too. :)

Hi there, your lucky your Jane got to you before the storms hit. I had to drag her out of the clutches of Fedex on New Year's Eve due to storm and holiday delays! I am still waiting for my extra heddles. Looking at your pictures makes me think that perhaps I should order a stand too. Cricket is such and appropriate name! I keep calling mine Jenny. The red bamboo fabric is beautiful. Can't wait to get something woven on my Jane. -Renee

I think I've found all to be found on blogs regarding the Jane. Thanks for the heads up on your friends blogs and happy to see the warping photos. I'm a front-to-back warper. Do you think I would have any problems learning how to warp the Jane? I'm seriously considering one. Thx.

Whoops, I also meant to say I looked for your email on several postings but couldn't find it. Thought I could 'e' you with questions about the Jane rather than posting here. Maybe you could direct me to your email addy somewhere on your blog?