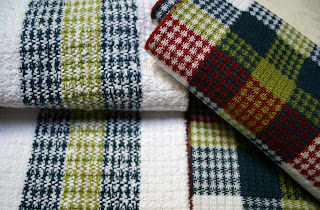 Spring, and the better weather must be here and how can I tell that? Well, it seems that all the blogs I follow are slowing down how often they post... including me. To be truthful, I haven't been weaving as much due to a bum knee, which is improving, thanks, and many things that take me on errands or outside more.
It seems the bonus of having a car at my disposal once more means, I'm doing more away from home. All those errands that Hub used to do are now mine. Ouch, a two edged sword! While I do like getting out more, the loom(s) are sitting patiently waiting for me. They are good that way.

I have also discovered that I am avoiding the 4/8 cotton placemats on the big CM Emmatrude. There's no other way to describe it. Why? I have no idea.... I must be a fine thread snob. But I will sit my butt down and weave them.... once the fine 2/16's warp is set to go on Lilibet. Can't have a naked loom! After all my MIL is coming next Tuesday and the studio must look like a hive of activity (even if it isn't :) She's here for a week so no weaving then either. That would be rude wouldn't it? 'Scuse me, sit right here, and I'll be back in an hour or two!

I have bought another used loom bench and it will come along with my friend, Lynnette, when they come for a visit in either July or August. It's a Woolhouse Tools commuter bench so essentially the same as the bench for my Woolhouse Tools loom. It will be be for my Louet Spring, Lilibet as the little tiny bench I'm using there is too small for the width of the loom. The smaller bench will shift to the Jane on her stand. Hub thought I could just drag one bench over to the other loom but I quickly straightened him out on that. Both looms are at different heights. End of story.
Oh, and I finally broke down and bought a gently used copy of the Janet Phillips book 'The Weaver's Book of Fabric Design'. I feel pretty darn pleased at getting it for $42.00, postage included. Just one small tear in the dust jacket and I can live with that. New starts at $75.00! It's in the mail to me as I write.
So I did dangle a nice picture at the top to lure you in and so we'll continue on with the regularly scheduled post:
This part of the post will show the final finishing of the recent towel project and a bit of show and tell. Once the cloth comes off the loom, I take it to the sewing table and use my serger to cut the towels apart. I have a White Speedyloc serger and love it. The only downside to a serger ( and I must admit my knowledge is extremely limited) is the threading. I cut off near the top by the cones and tie a knot and take off the tension, then pull the new colour through. So I cheat.... but every now and then I am forced to thread from scratch and its a chore and a half... The connections points are colour coded but the guide book is flat, and in black and white. Definitely something was lost in translation from Chinese into English. (no offense) If we had stayed living where I bought it, a few in store lessons would have been the smart way to go!

Serging seems to secure the the raw edges of handwoven fabric far better than simply sewing or zig-zagging the edges. The only thing I might not serge is a fine thread fabric where you don't want *any* extra bulk at all in the hem edge. 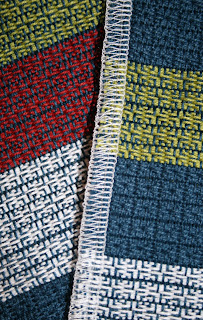 Here's the stack all serged! A satisfying feeling.... 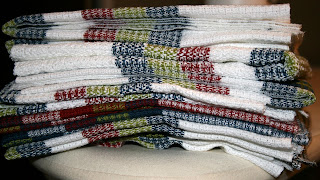 With this particular pattern, 'breaks and recesses', there is a nice clear line on which to fold and turn. In this case I decided to machine sew over hand sewing as these are clearly towels. Some of you may be familiar with the gifting of a kitchen towel only to see it being used as a runner, or some other use..... or worse still, stuck in a drawer as it's 'too good' to use! Machine sewing the hem is my way of trying to steer the end usage :) 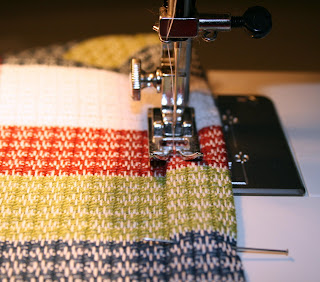 This was an 11 yard warp which produced 10 towels, woven to 34" each, plus a small strip for samples and of course, loom waste. Before they were off the loom, I knew some were sold. I just didn't know how many! I wanted at least a couple for our kitchen. One was woven with 2/16's in black to coordinate with the black accents on my Ceran stove top. The second was woven with the thicker boucle weft but I had forgotten to to use a finer weft for the hem area, so this one was for us as well. Since we are hand washing dishes ( long story, short: dishwasher broke, too old to fix and we are waiting till the kitchen is reno'd to buy another...) the thicker towel is perfect for us! I brought them to the kitchen right away! 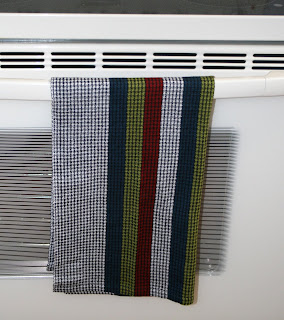 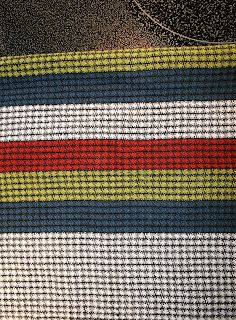 While the white seems to soften them and reduce the intensity of the stripes... 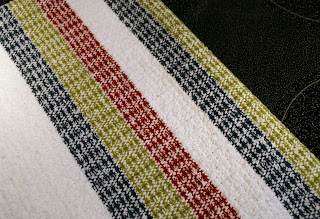 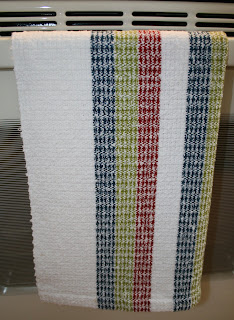 So 4 towels were bought and whisked off to Toronto and this is the balance of the herd all posed for show: 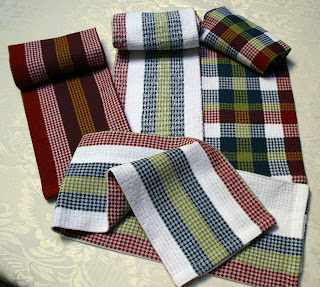 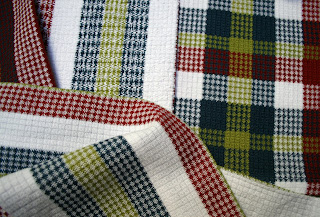 So I have a lot to do in the coming days: bake some desserts, clean house, laundry, grocery shop and we have to get the lawns and such under control before Mom arrives..... wish us luck.
I'll be back after she's gone home....
Posted by Susan at 9:56 AM

If your MIL is as rad as mine, she might be up for watching you weave;) Best wishes;)

These color combinations are really wonderful, and I like the texture very much as well.

Have a nice weekend!

I love every one of your towels. Amazing how different colored weft yarn gives each towel a completely different look.

I wish I had a serger but looked at one once and just knew I couldn't master it. I have problems with a good old regural machine. The finishing looks so much more professional.

I'm with you. I hate it when I give someone a towel and they use it as a runner or hide it in a drawer.

These are wonderful! I am starting to plan a towel project - thanks for the inspiration!

You're right about looms being good at that. My loom is a very saint for patience. Especially with the indignity of moving boxes still wedged in all around it, and an interloper getting all my attention!

Your towels look beautifully summery and foody. I mean, the colors are appetizing, in a summer foods kind of way.

Susan, gorgeous towels - you're finishing is as meticulous as always! Really, really need to take a deep breath and make friends with my serger once and for all... :) Something about summer seems to lure me away from the loom (and my blog) a bit more - yikes, I should be building inventory while I can!! (LOL)

Really excellent towels, Susan! Each one with a different look, and all off the same warp. I love doing that, too!

The tea towels look wonderful! It's amazing how changing the weft colours makes such a vast difference. I'll be picking up the loom bench this week and will hold on to it lovingly until I get there!
So glad you sent me a small sample of the towels, what great feel. They really are jumping out your door!

Glad your knee is doing better!! I definitely took my joints for granted before I had some trouble with a few of them. Happily for me, they're happy again!

Maybe I need to get a loom that follows me around the house, yard and world and begs me to weave on it. Otherwise, there is just too much going on at this time of year!

Thanks for the inspiring picture of a serged towel! I'm still working out my best hem finishing technique! I am going to try a friend's serger, because I get that recommendation a lot!

Your towels are beautiful!! Hope the visit has gone well!!!

These towels are just terrific. I love the color combinations. I also enjoyed your process of finishing them too. I love weaving towels, but am less in love with finishing them up so this is great encouragement to work through my stack!

I love your work and appreciate your detailed comments. I am curious as to how the hems "behave" after you wet finish the towels. Do you ever have any puckering from the hems? How would you handle that if you did?
You are my inspiration!

Hi Denise,
I normally prefer to hand sew hems over machining, but in either case if the hem is properly lines up with the pattern on the reverse, it seems to be fine. Carefully checking to ensure it does frequently helps! I guess even beating during weaving helps :)

I'm tempting fate here, but so far no puckering! I know that many wash first and hem later and I'm going to give that a try and get my own personal results to compare.

Thanks for writing and stopping by.
Susan