I haven't fallen off the planet! I had a week where I nursed a twitchy low back back to something less painful. After spending three months healing from the last bad back episode, I listen when it tells me to slow down or stop!

My sister came for a visit and so not much else was done during that time also. Just a whole lot of talking! Its always memorable when my sister comes to stay.   :)  Since she left, I have been trying to catch up on chores and  life.

Let's talking some weaving !  I have woven three scarves in the Gebrochene / Hind und Under pattern and you can get the details here and on the blue runners here. I had left the loom tied up and planned a second project. It is a 12 shaft / 12 treadle tie up and quite time consuming on a countermarche loom, especially so when you have back issues. So I'm trying to get more out of the time spent on my tie up's by planning at least a second project.  The second project is a set of three table runners with the sales this fall in mind.  I left you last time weaving my second runner using navy blue orlec and one last runner to do. *Insert bad back week here*  When I finally sat back at the loom, I decided to go with another blue on blue and used 10/2 mercerised cotton for a finer cloth. It took longer to weave up due to the dark colours, complicated treadling and my sister's arrival.  *Insert chaos here*  :)

The good news? the runners are done and off the loom. The bad news? they are waiting for hand sewing the hems.  I'll be starting them after I post  and show them next time. 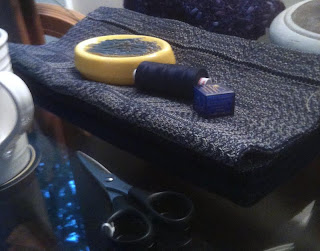 I did get another warp wound and onto the Louet Spring right away. I'm participating in a weaving exchange with the Guild of Canadian Weavers and the deadline to hostess Lynnette is October 1st. I thought it might be nice to be early this year and start on them now.  Its not a big deal: four book marks. That's it.   Somehow I have made it a big deal! 12 shafts, 12 treadles, 47 epi with a fine linen and 20/2 cotton.  Oh, and I put on three yards to make extra. Its a point twill designed by my friend Gudrun Weisinger and is treadled "network style". No distractions while working on this one! 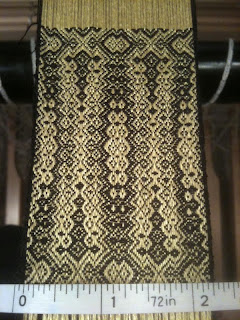 This is one repeat and its only three inches long. Like I said, I made it into a big deal! But I love fancy twills.... 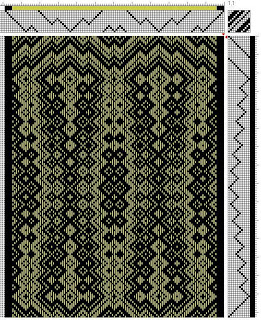 Well, it will keep me busy for some time! I also want to do a second project off this tie up so now mulling over ideas in my head. So there should be some show and tell in the next post for you.  Hope your summer is going well!

PS We took our house off the market and staying put for now. That means I can plan a warp for my big loom now that it won't be dismantled. Life is getting back to normal.
Posted by Susan Harvey at 10:04 PM

I'm sorry to hear about your back. Hope things are better now.
Seems you've had fun even though. So much weaving going on.
I love your blog and all the info at the side. I learn a lot from you but I think I mentioned that already in other post :-)

Wow! Some lucky guild member is going to have possibly the prettiest book mark that every lay between two pages. I'm so sorry to read that you've been battling back issues still...awful stuff, these backs! I look forward to seeing the final postings of the gorgeous gebrochene runners...it's just a tease with them folded here. Your work is always inspiringly beautiful. ..Wishing you calmer waters with that back!

Beautiful work-glad you listened to the early whisperings of your back this time. Sorry about the house sale but it would be a relief to have it off the market so you are not on edge all the time. Later, the market will be more amiable to a sale.

Susan, looking forward to seeing the completed runners. Your work always inspires me. The bookmark is a big deal, oh how I wish I was in your guild... Hope your back is getting stronger every day and that you feel hale and hearty so we can see more of your work. Please give Miss Callie a big hug for me.

Your weaving always impresses and inspires me. STUNNING!

Those fancy twills are really spectacular. Take care of the back and it'll take care of you! Mine complains occasionally, and I have to listen, no ifs, ands, or buts. If I don't, it teaches me the lesson again, and the lesson gets more serious each time. Sorry to hear about the house, but it's better to sell on a high note, not a low one.

That is an absolutely beautiful bookmark, I love these twill variations too.
And I really sympathise with your back troubles, especially since I have been having some myself lately!
Ellen

With all your visitors, back and house issues you have done so well to get this much weaving done !!
I love the draft for the bookmarks and I feel a shawl coming on as the next project using the same tie up !
Dorothy

Thank you for your blog.  You have woven such lovely things!
Greetings, Marisa

(many thanks Gudie for helping!)

Thank you for all your comments!
Padre Wayne: click on the draft picture to enlarge the image and then right click to save it. You can then view it at your leisure.
Besides the network treadling you can also treadle it as drawn in which looks great. I'll show this in my next post which is coming soon!

I put this draft on my loom, treadled tromp as writ. Thank you for the inspiration! http://tangibledaydreams.blogspot.com/ -Melissa