Clearing out the Cobwebs 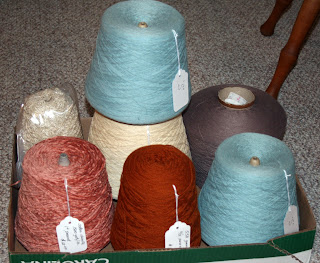 Hey! Yarn alert!    But this is actually leaving and hopefully going to new homes.  Strange concept huh?  There is a  fleece and fibre fair tomorrow and one of the organisers asked me if I had anything I would like to add to their sale table. My contribution went from a few odd and ends to 64 items!  Its a blend of some books, yarns and small pieces of equipment.

I have been in gather mode for years and eventually you begin to realize that you tend to weave with certain types of yarns and some cones just sit and gather dust. You will never use them.

It all started innocently enough.... I'll just look through these here.... oh, look at the dust balls.... next thing you have the vacuum in hand and the entire stash is being dusted, reorganized and the orphans are in a box for the sale...  It took me two days (yes, I do have a lot) but I was rethinking every single ball, cone or skein. Getting familiar with them all again and finding some I thought lost forever!    :) 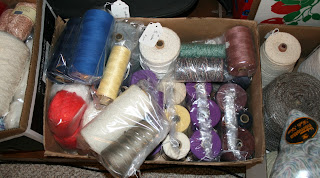 Some were hard to part with. They came from friends who have passed away. Some were guilty of being synthetic, some are simply too lumpy..... others too fuzzy. There are some I regret sending off  but the inventory sheet is done and they are beyond my reach now.

I found I have more room for new yarns now!  If all this banished yarn sells tomorrow, then I can afford to refill the empty spots, but I will resist the temptation as I have a better goal for the funds.   There is a spinners and weavers retreat being held the end of March in 2012 that I have booked a room and reserved space at the events for both myself and Lynnette.   The last one we attended was back in 2006 and we had a blast! 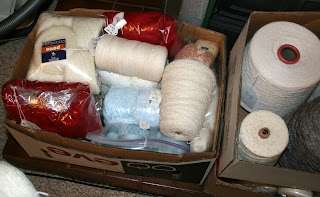 So with this retreat in mind, I was guilty of reaching for yet more cones and viewing them  more critically and "when in doubt, then toss it out!".  I was motivated! 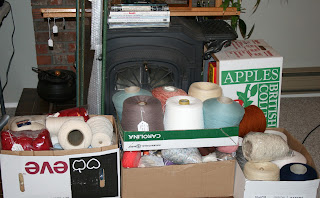 So it was a hefty load and I noticed that my friend who was taking the boxes was busy checking things out as she's walking them to the back of her car. It was hard to get her attention to say good bye..... yarn does have that effect on us doesn't it?  :)

So my stash is still on the crappy shelves I don't like (to be resolved at some point later) but its better organised, dust free (for now) and set up in categories that makes sense. (well, to me it does!) 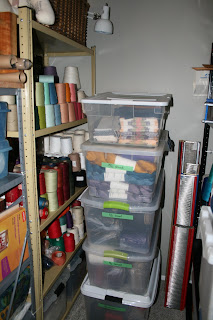 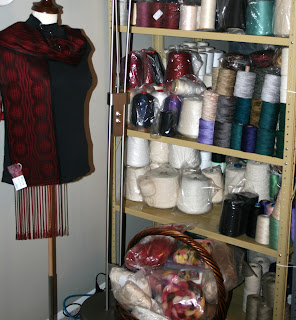 Well, it's clear that I have S.A.B.L.E. disease.... you know "Stash Accumulation Beyond Life Expectancy"
If that's the case, I'm going with a smile!

It was hard for me to read the post, my eyes kept going to the stash pictures! Lucky weavers who will find a gem to take home from your sale! Sigh...wish I lived closer. Where are you and Lynette going for the weaving/spinning retreat. Just the thought of a weaving retreat sounds wonderful. Pet Miss Callie for me.

I'm with you on the 'weeding'. One of my New Year's resolutions was to reduce my collection (it sounds so much nicer that stash ;)). In the spirit of encouraging new fiber artists I've given away pounds of spinning fiber, some weaving equipment, and even an entire loom.

Now that canning season is over I can get back to my fiber pursuits.

Good for you! I did a bit of that last year for a guild stash sale.

Great idea and putting it to a retreat is the best part! I found I didn't get rid of nearly enough and will have to begin that sorting again.

I did this last spring, but it wasn't just weaving stash and it took me a lot longer than two days!

Alas, I wound up bringing most of it home, but at least it was dusted off and better organized, and I've since sold some of the stuff to people who saw it at our destashing sale and decided afterwards that they wanted it.

Hope you have as much or more success and wind up with a tidy sum to put towards your retreat! Where will it be held? Is registration open to weaving and spinning public at large?

Wish I was heading for that sales table !! What a major clear out you have had ! Room for more now !
Dorothy

Good on ya Gal! After a few months you'll hardly remember what your previous stash looked like! I can't wait til March either!

I was delighted to see someone with as bad a case of must-have-this-yarn as me! It was a good idea to go through it all and sort it, - as you said there would be room for more now :-)
I find I have very little in my bulging shelves I know I would never use, - it just begin to doubt if I have enough years left to actually use it!!