Weaving that last shawl was fun!  While I was busily throwing the shuttle during the first I wondered what it would look like if I reversed the treadling? So I took a look at this reversal on the draft in my PCW Fiberworks program and it looked good. So I played around with the colours and stripe arrangement. I could see areas that I could improve or expand.

I decided to reverse colours as well.... to use a lighter shade. Remember, I'm trying to explore more colour in my weaving too.  Same 12 shaft M's and W's threading as before, same 8/2 tencel... even the tie up is all ready done! 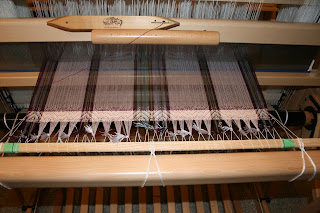 So here we are about to get under way again!   From the knots to the first inch of the sample?  Four inches! Lacing on is a real warp saver... 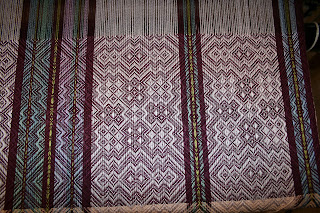 So the colours here are eggplant, orchid and a green and also a variegated tencel in shades of plum pinks, blues, greens and turquoise. All colours to be found in the northern lights or aurora borealis.  Since we recently had a major solar flare and increase of  northern light activity, it seemed  to be timely. 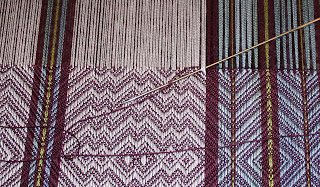 Before I knew it, I was hemstitching the last edge and onto the next phase of the project.... 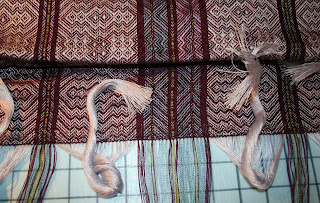 I found the "ABBA Gold Hits" collection great twisting music with a side of sing a long!  It also took an afternoon as I had to work out the various groupings. 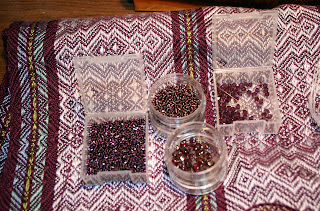 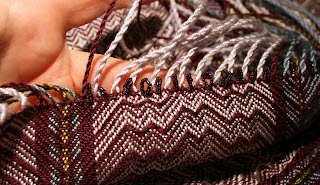 Next step step was handwashing as like the previous shawl, with hanging to dry over night, and then a hard pressing with my steam iron.  Madge was called up for duty again. 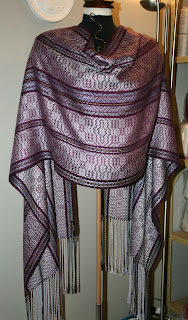 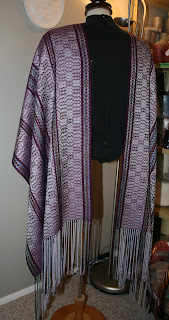 (Madge looks a little round shouldered doesn't she? )   This shawl doesn't have quite the iridescence effect the other one does but there's a gentler quality to it.  (For iridescence I believe the colours used must be of a similar value as well and that wasn't the case here) 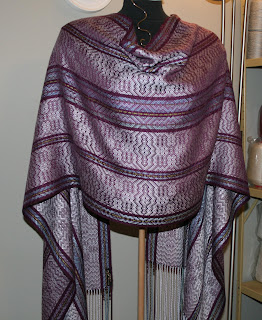 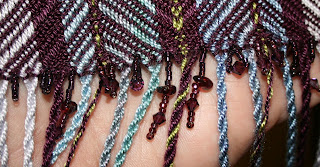 I tried to get good pictures of the aurora in my cloth, but as I said the light source sure changes the look... and then you must add camera, and computer screens... 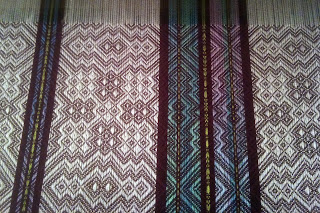 ... and as luck would have it, my cheap camera in my mobile phone caught it best!  Now that's funny...
Both Aurora and Little Lochmaben are going to the Retreat next weekend with me and I'll report back how they do.  Its going to be a girl bonding weekend just me and Lynnette... and probably a 100+/- others!
(oh, why stop at two?  Number three, and last shawl in the series,  is being wound onto the loom today!)
Posted by Susan Harvey at 10:36 AM

Another fantastic shawl. Nice gentle colours and I love the source of the colours ! Lovely beading too. You will be the star of the retreat with these two shawls. Maybe they will both go to new homes !!

The cloth pleases me very well. I wish you much joy thereby. Love of greetings from Ate

Gorgeous......I would love to come and pick your brain for a week....you are so clever.

Wow, what a difference a few color changes make! This is a stunning shawl, completed in true impeccable, gorgeous Susan fashion. ...and oh, to look forward to what the third will bring. Always such fun to see your work!

Aurora is beautiful! As is its predecessor. But then, you know that. Great work!

I'm sooooo much luckier than the rest of your readers....I'll get to see them in person on Friday! Really lovely shawls and I know they'll steal the show!

Susan, have you ever tried tieing your warp on using shoe strings as shown by Nadine Sanders on her DVD? I used to tie on lacing as you've recently done, but once I tried the shoestring method, I was hooked as it is much easier and also saves your warp as does the lacing.
June, NH

Hi June,
No I haven't tried the shoe lace method but it does sound interesting!

So far (touch wood) I have no troubles with the regular lacing technique. Just had a lot of practice with it I guess!

I have met Nadine Sanders at the vendors are at Convergence 2002 in Vancouver. I bought her book/ cd "Weaving that Sings"