From Babies to Birds, to Bookmarks!

So our new little man, Ethan is 4 days old and now settling in at home. We are hoping to go over and visit him and his parents very soon. I have no doubt that they need a few days to themselves.  I'll be sure to get lots of photos then!  In the mean time, here is a precious picture taken the night he was born with a mobile phone. I have this one printed out and hanging in my studio. 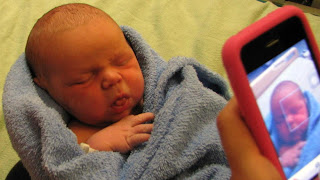 Lots of fresh new starts... it is spring after all!  We seem to have a pair of last years hatchlings back trying to work out how to build a nest. We have an open beam roof above our front door and I guess it looks like a condo to them and they can't decide which one to settle into!   I say 'they' as I haven't actually seen which species of bird is doing this! They don't actually get much of a nest made and then move onto the next spot. 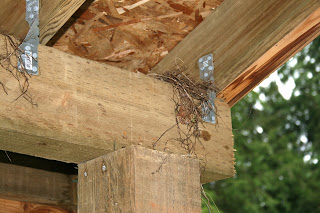 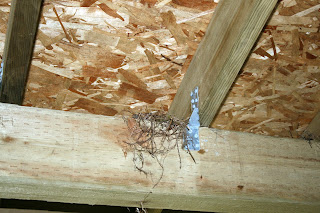 Then three times a day, we sweep this: 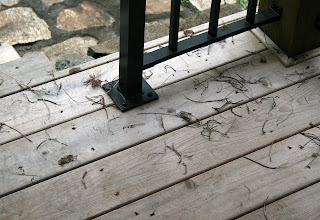 There is a huge pile of twigs and grass off to one side from several days worth while they run to the 'store' for more!

Okay, while we are outside: we are having revisit the front garden bed where they dug through to install the water to the house in our new well escapades last fall.  There is a green junction box that we can't bury and it looks stupid sitting there in the middle of a flower bed. So we have a large pot to hand and we bought a new miniature Japanese maple. Just need to get the bag of soil tomorrow. Its a start. I'm going to hang baskets everywhere this year and just waiting on better weather and bigger baskets to show up! 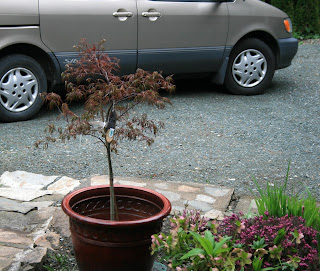 The big loom sits and waits for all the undressing and spa treatment. I thought I had a full bottle of my oil and apparently not.  In the mean time my box load of texsolv cord from Woolhouse Tools has arrived in the mail. All 288 of them!  This will not be a fast job as I'll tackle it in stages. I will be wearing knee pads when the cords go on as you spend several days down on the floor.  *sigh* 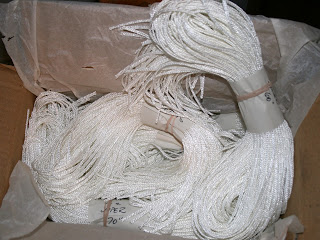 Another start is the finishing of the third shawl  and I waded through one side of fringing and just set up today to work on the second side. Beading will also follow... so a bit more time is required before its ready for the big reveal. 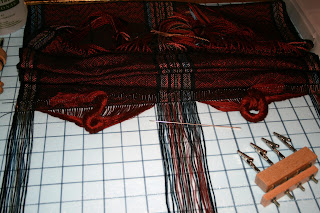 I've been listening to an audio book while weaving some bookmarks.  Remember them from last year? I'm making more as the last batch was for an exchange. They are quite narrow and quite fine with 20/2 cotton and 40/2 natural beige Belgium linen. Here's one with 20/2 black cotton weft, woven as threaded: 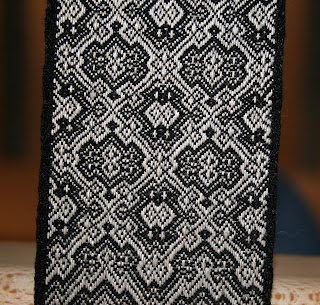 I planned for 19-20 of them and have 9 or 10 done. I lost count.  Today I got a bright idea and pulled my pirn off the Schacht EFS and plunked on a spool of quilters mercerized cotton sewing thread on the pirn shaft  and as of late this afternoon, this is what it looked like: 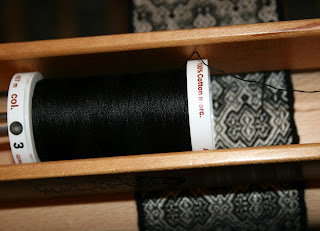 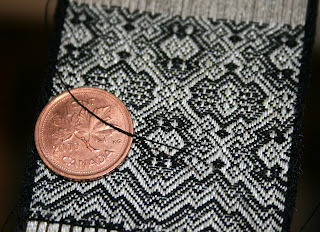 I'm just trying the one with the thread and back to the 20/2 cotton....  {That's the endangered Canadian penny which is being eliminated soon. Its costs almost two cents to make it!}

So lots of starts and much to do, but no rush.... when the sun comes out, I've been slipping the chair and spinning wheel outside on the deck and take a break there. I'm going to smell the flowers more this year.

What a perfect little boy! There is nothing as sweet as a new baby.....If I lived closer, I'd volunteer to come and sit under the Woolhouse to help set up all those cords, since that would be good practice for me. I'll be there in spirit. The shawl is so incredibly elegant and rich; the bookmarks beautiful and amazing. I don't see much difference between the 20/2 and sewing thread! These bookmarks are amazing and oh so beautiful! Always up to good things, Susan!!

Beautiful baby! Great bookmarks! Is the pattern for the bookmarks the same as before? They're stunning!

Beautiful baby! I'm sure you can't wait to hold him in your arms but you've right about the family needing some time to just settle in.

Your bookmarks are amazing,

What a cute little man! Love the bookmarks