Take heart those of you who are snow bound and cold.... spring *is* coming! And if you are from the southern hemisphere, the summer party is coming to an end (sorry).


This is that "weird" month of the year. When all the fuss of Christmas and New Years is over and normal routines seem blah. A little too mundane... The middle of winter and I have been counting up the extra four minutes of daylight we get each day. Since December 22?  As of today, that's 38 days and equals 152 minutes or 2.53 hours of daylight!

So things are in limbo here as well.   I have an alpaca silk warp on the Louet for  two men's scarves. Its a four shaft twill in manly colours: 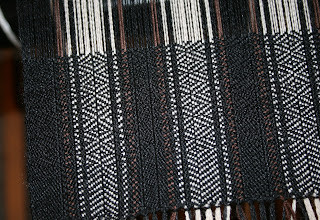 All the yarns were in skeins and so I have been winding endless skeins into cakes .... and then the next project I have in mind also has yarn that needs winding into cakes as well.  I sit and and spin it ten minutes at a time at a good clip and then move on.

Meanwhile, I thought I would load up the Woolhouse with cottolin for 12 shaft turned twill towels. I had a BIG two pound cone cone of Nordic Studios cottolin from before it was sold and moved south to Texas.  No problem right?

At the very  section of warp to be wound, and the very last warp end.... this happened! 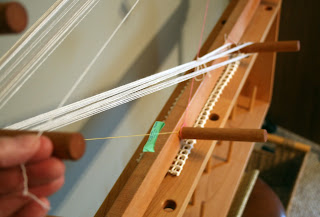 I ran out with one yard to go! Knowing this end would be loom waste, I tied on a section of 8/2 cotton and called it a day.

Now I'm looking at an endless sea of white heddles and white warp.... 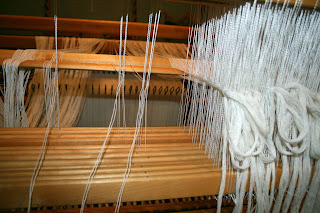 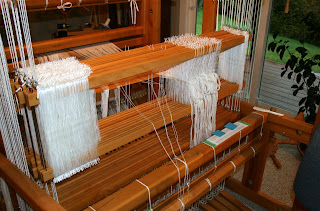 I print out the threading and then use post it notes to isolate the section I'm working on. I ended up with 12 ends left over so now I'm going back and double checking where I goofed.  *sigh* 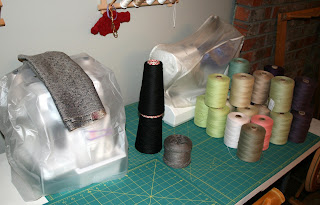 Here's a table load of half finished / half started fun.... the black cone and grey in front are for the next men's scarf project (to be discussed at another time). The cotton cone pile is a recent yarn order and some of it is weft for the cottolin towels plus  the next towel project. I'm testing out colours together.... to see if they grow on me.

The cloth on the serger is the recent gothic runner.  You'll see a show and tell with it eventually. Right now, its cooling its jets for a spell. Well, that's what's left of the project...  Its a story that's ends sadly and involves scissors. The first runner went well  with a fine blue 16/2 cotton weft went just fine. It was planned to have a twisted fringe. The second runner I used a fine cream bamboo weft and I got about six inches woven and left it for the night. The next day the edge threads on the right hand side started breaking like crazy!  I couldn't find any reason for it. Then they simply loosened off . I was mending and repairing and finally about to sit and start weaving when the left hand side simply lost tension too!  Next thing I knew, scissors appeared in my hands and the problem went away. I reasoned my time was more important ... and ... It wasn't fun anymore.

Its a good thing to keep in mind.... its all supposed to be fun!

Hi Susan! I'm just not quite sure about these signs of spring yet...it's not even February. I have a feeling all of these buds are going to be frozen ones before they're finished. You have been busy! Sorry about the bugger warp...you are so right; it is supposed to be much more fun than that! The masculine scarf is delicious in its own right. And you know that anything on the Woolhouse demands extra time to simply admire. No doubt these will be winning towels! Did you say how long this warp is? Enjoy!

I love seeing all the progress pics in your studio space, Susan! So much going on!

Yes, I have sacrificed a problem warp or two to the weaving goddess - way better than fighting with it.

Susan, we had a great design workshop with Tien Chou this last weekend. She showed us the awe inspiring number of samples she did before weaving that wonderful coat with the asymmetrical front and maple leaves.

She did many muslins, dyes and weaving samples. And she was still happily involved!

The workshop was great fun. Will tell you more in an email.

Two Guys and a Loom said...

I think the last plant photo is of Pieris japonica.... so glad to see the Hellebores getting ready to bloom!!!!

Wow! You've been busy while I was sniffling and coughing. Glad you found a solution for your last end! Isn't that always the way though?

BTW that's a pieris japonica, also referred to as lily-of-the-valley bush. They're in the heath family (like the heathers). I have 3 huge old ones and I just love them in all seasons!

I'm amazed at all those flowering plants starting to sprout already. I wonder if it's going to be an early spring.

I had a lovely comment from a GYB visitor:

You do very impressive work! Weaving always interests me (as a spectator sport), but your range of fibers and patterning (probably not the correct term, but I hope you know what I mean) is really amazing. That snowflake twill!
I'm another visitor from the GYB Party, still puttering along through the list, and I'm so glad I didn't fizzle out before getting to you :)

Lovely to see the spring pictures, we have the same sort of signs of life here but they may yet get frosted !
The man's scarf looks great, nice calm colours.
Things must have been bad on that warp, taking scissors was a major step for you !!

Humbug, we're still waiting for summer - overcast skies and strong wind and smoke hanging in the air from the Ozzie fires. At least its not raining (but forecast for next week)!
Good weaving weather.

Hi Dianne... yeah, sorry about that. It must be frustrating waiting for summer in NZ while Australia burns up next door (so to speak).

Our balmy weather here is the anomaly in Canada. The rest is frozen and bitter winter weather. Being an island we seem to enjoy a more moderate climate here. There are a lot of retirees here from Saskatchewan ( a prairie province of Canada) that 'enjoys' deep winters with much snow. It finally gets to them and they make a break for the coast.... the rest of them must be slow learners! (kidding)

It is supposed to be fun! I just unbeamed a warp so I could replace about 20 ends. It took time but the end result is already a positive one!