Be Careful What You Wish For!

This post will have a little bit of everything!

I found an old black dress that the 'dryer shrunk'  ;)  Its too small for me right now.

So I tried it on Madge Manikin and somehow she looks more complete. More put together. I could still use some arms though so I'm always scanning sale pages for a used manikin. A second one would come in handy sometimes! (No, its not your imagination, she's leaning a bit. I have to shim her 'feet' and straighten her up!)

I have a new warp on the Louet Spring for more men's scarves. Its silk yak blend at 36 epi so its quite fine. I was quite surprised by how much 'loft' the yarn has. Its very lush and springy but was not difficult to beam and behaved well.  I'm using a fine 30/2 black silk as my weft on this four shaft herringbone twill.  Its finer than I wanted but it seems I'm out of 20/2 black silk. Any way you cut it, its a lot of treadling ! 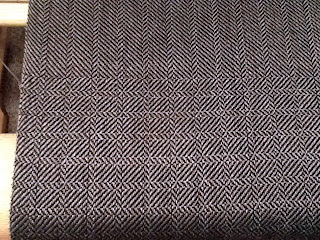 Sorry for the mobile picture but I forgot to snap the plaid section that will be on either end of the scarf.
In between is a whole lot of.... 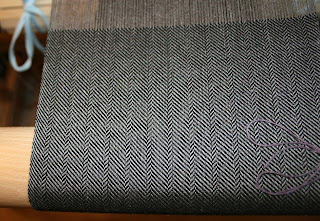 Meanwhile on the Woolhouse... I finally finished fiddling with the cords, did the tie up and made a start today. The back peg board told quite a story! 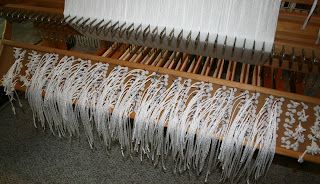 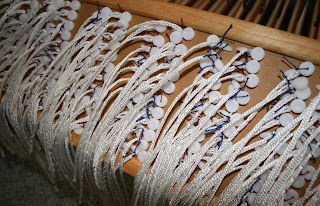 The top picture show all the cords that I worked on. There were two treadles on either side of the centre twelve that I left alone. (they have not been used so would not have stretched). The second picture is a closer view of the middle of the board. The blue ties are the ones that had shifted and needed remarking. Any red ones are the old ties and were fine. Tie up's are usually focused on the middle portion of the treadles and so receive more action.  Still think texsolv doesn't stretch? 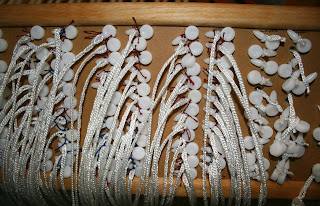 This picture was taken on the far right of the board and these shaft/ treadle combinations were only lightly used. There are far more red ties from the original marking with just the odd blue one.  If I use more 12 treadle tie up's in the coming months, then the two outer shafts will need a tweak... that's not difficult to quickly do up.

So what finally showed up on the fun end of the loom?  Glad you asked! 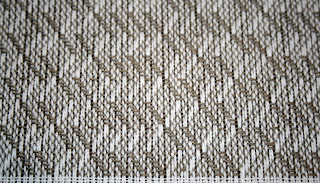 A rather interesting twill. Its a twelve shaft draft, threaded like a turned twill.  White cottolin sett at 24 epi and the weft is 8/2 cotton in sage green. There is two distinct blocks (treadles 1 to 6, and, treadles 7 to 12) What you see above is a simple treadling of 1 through to 12 and repeated. Optically its a brain teaser! I really like it and looking forward to trying other treadlings on these seven kitchen towels.

Speaking of treadlings.... last post I grumbled about how short a run only four treadles were. They are very light to lift too.  Well, Karma is pretty quick as I'm lifting twelve shafts now and I'm going to have great thigh muscles by the time I'm done (even with all the pulleys). Its also a twelve treadle run and compared to the other loom, it seems I'm never done! There is always another treadle to hit.  So with two looms at these funny extremes... I'm having a  good laugh at myself. One loom is a rest and the other a work out.

As I mentioned previously I have been selling off stuff from the studio and then I ordered in some goodies. They are slow coming in but they are coming! 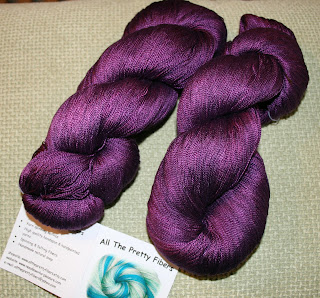 From Etsy shop "All the Pretty Fibers" some yummy 20/2 mulberry silk hand painted in a rich deep grape. They came from Rothenburg, Germany.  (If you are into spinning, check out her fiber.... its gorgeous!) 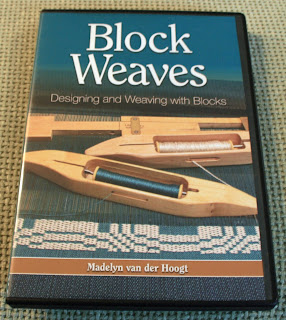 I'm looking forward to viewing this dvd on Block Weaves by Madelyn van der Hoogt soon. I can play it in my laptop and view it on the big screen TV... but its finding the time to view it! I'm sure that as supportive as Hubby is, it would be boring stuff for him. These discs are like having a workshop close to hand and a great refresher.
Off to Victoria tomorrow....they have cherry blossoms out and spring bulbs are up there.  Its supposed to be raining but I'll take it. It beats the heck out of what other parts of the country have been getting!
Posted by Susan at 11:22 PM

Susan,
I Love the look of your 12 shaft towel. I've been a bit bogged down with what's on my loom for stash busting. This makes me want to cut it off and PLAY!
Lovely!
Karen

I love that optical illusion twill, Susan!! Is that something you designed yourself? You're so clever, and that is SO gorgeous.

beautiful silk :) have fun in victoria! i just love it there. although i also love nearby sidney almost as much.BC is so beautiful! Im an hour south of seattle and we are seeing the first signs of spring as well.no flowers yet,but our winter has been so mild it wont be long.

Oh my have you been a busy lady! The black and white men's scarves are absolutely beautiful - very tasteful and classic. It always amazes me when you post about your 20+ tie system - looks so complicated from this side of the computer. The 12 shaft twill is a winner - really caught my attention. Hope you and Bruce are staying well, warm and happy. Pet Miss C for me.

Hi Susan,
I'll be interested to hear your review of the DVD, as I've been considering buying it. I'm a new-ish weaver, and can't wrap my head around block weaves, and am hoping to get that Aha! moment when it all makes sense!
I get so much from reading your blog - I refer to it frequently when working on a project. Just wanted you to know how much I appreciate your work on this blog, and how much I admire your weaving!

Susan, I love the twill on your tea towels! Will be interested to see what the other treadlings will bring.

I love that 12 shaft pattern! The silk isn't too shabby either. :-) Can't wait to see what it ends up becoming.

Hi Susan - great post and lovely pictures. Herrinbone looks very classic and I can feel how soft it is !!!! The 3 D draft on 12 shafts is very different and eye catching. the colour of the silk is very very nice and 20/2 is a nice weight.
I have the block weave videos and they are very good but I had to concentrate to follow it all. Would really need to watch it over and over to really grasp it ! Lovely examples of weavings though.

Hi Susan - Cherry Blossoms in bloom; I wish something was in bloom here on P.E.I. More wind, more rain, more snow and more freezing rain - oh well it is February in the Maritimes! I love the 12 harness 3D twill tea towels, who, very eye catching - they won't be in stock long. Happy Weaving. Barbara

Everything is beautiful - even the loom! the silk really drew my eye as purple is my favourite colour and this one is so deep and luxurious. happy weaving. Betty

Hi Susan, beautiful, beautiful silk! I love the shaft pattern, the twill on the tea towels and even the loom.