A week has gone by and I have no new weaving to show you. I was wondering what to post about and then it occurred to me to show you what I had accomplished in the last seven days. 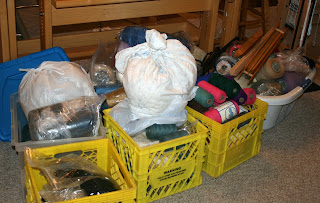 One of the last pictures in my last post was a pile of yarns and tools that were being 'released' to go to other weaving homes...  It took me two and a half days to separate the items into logical piles, such as acrylic, linen, cottons, wools, tools etc.  Then I made sure they looked their best and documented them and took their picture. Then I had to tweak each picture and organize a folder for them.  Then using my paper lists, I checked if and where they are being retailed now and what their full  value is and determined a price. I normally went for 50% and a smidge under.  I need a fair price but I also want them to move on to new homes.   It took a lot of time to get all this work done....   Little did I know!

I've been a member of Ravelry for some years and there are an eager and enthusiastic bunch of weaving groups there and one I use to sell stuff at is Warped Weavers Market Place. I have great success selling there, much better in fact than trying to sell  off a second page here. You have to admit when you advertise there, you're talking to the choir! So I began listing items under logical heading such as "tools" or "tapestry yarn" or "Cottons" etc.

That took me two full evenings to upload and in between, field inquiries from interested people.  Then began the next phase of the operation....  myiPad to track incoming buyers and a handy dandy post it note pad.
The buyers were taken in order that they wrote (to be fair) and then I would itemize their name, email, Ravelry avatar name and what they wanted to buy. Then I'd go into the web page and mark those items as "offer pending"..... and then go and pull the cones or what ever and place in bags or boxes with the post it note inside.

Then came the boxes and packing.... and more boxes and packing!  I took a stack to the post office this past Monday for postage quotes and I used a  fully loaded suitcase dolly and hubby came along with the over flow!  The little local post office clerk looked gobsmacked when we came through the door as she mainly sells the odd stamp and handles small parcels  on a Monday morning.  We whipped through them and even had a chuckle along the way. Then schlepped them all home again and then contact everyone about costs....then once they paid, addressing boxes for their trips and making out Customs forms.  Done?  oh, no... back to the web page and now change "offer pending" to "sold".

I took Tuesday off as it was my birthday and Bruce had plans for my day!

Meanwhile the sales continued and so there are more purchases for  new quotes and fresh boxes to be found. It was the boxes that determined who got wrapped next. Some items required an odd sized package and some in the case of the rag shuttles, I had to make a container for them!
I went through two rolls of packing tape and two rolls of brown paper.... miles of packing paper and each and every box got a handwritten note from me. Only two buyers backed out due to high postage costs (well they lived in NE USA so about as far as you can get from me) and their items had to be relisted and quickly snapped up again by others.  I'm so glad I had my little system in place as it got CRAZY here!


By the end of today I had wrapped the last order after locating the  last perfect box ! I'm off to the post office tomorrow and give the clerk there her busiest  hour of her week, (beside last Monday.) 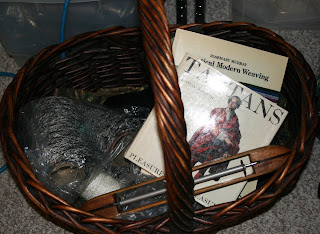 This is the last of what is listed and once the sold items are finally cleared off, I expect they will be sold too.
So that was my week.... and yes, my Louet Spring is naked, but not for long! I'm eager to get back to a more normal studio.

Next month is our grandson's first birthday and we will be going over to help celebrate. Its hard to believe that was a year ago almost!  Ethan has nine or ten teeth now, standing at the couch by himself and his method of crawling is much like a penguin on ice.... slide on his tummy!   But is he ever fast at it! They have hardwood floors so he's using them to his advantage. Not sure what happens once he hits the carpeted areas?!  He's developing a personality and apparently has a stubborn streak that has a bit of temper for company. Now, where did that come from??

What a major spring cleaning session you have had ! Big project though to get all that postage and packing sorted out.

You are such an inspiration, Susan! It shows a lot of love: sharing and caring.

Happy Birthday Past! Hope it was an excellent day :)

I am SO impressed! That's a huge amount of work. Once it's all done and out, I'm guessing your space is going to feel so much better. Enjoy!

Studio clean-out time is a lot of work - I went through the same process a while back, mostly books from my textile-related library shelves. But isn't it satisfying to send 'em off to new homes? Make it all worth it.

Holy organized gal! I'm so glad you are my best bud....but you set a very high standard! Thanks so much for sharing Warped Weavers sale page with me; I've sold every item I've listed in the past few weeks and I'm so thankful to find homes for my duplicate items!