One Step at a Time

While I'm embarrassed to say how long this project has been going on, I'm also happy to crow that it's finally  finished now!  Do you ever have a project that you are happy to start but it turns into the longest 'short' warp ever? 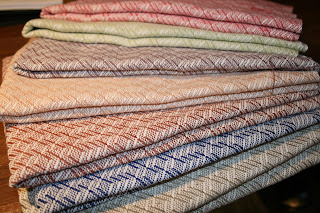 So what happened? Well, I love the big loom... my Woolhouse Tools countermarche, but she needs a full leg extension to treadle and that can aggravate a lower back problem. So what happens is that what ever is on the loom must wait until I can treadle again comfortably.

Then add my left knee into the mix and a right foot as well and it complicates the issue.  While I complain about health issues, I rarely go into much depth on this topic but this time I will explain what I do know. I need a left knee replacement and waiting to see a surgeon. Then after that is done and healed, my right foot needs a mid foot bone fusion.  That requires a full three months to heal properly with no weight on the foot.  I drew the short straw when it came to the family's arthritis gene pool! None of this will be happening for at least a year

I share this as I'm not producing as much finished weaving as I used to and so things here at the blog will naturally reflect that. I'm continuing to weave regardless, but just not that fast.

Baby Boomers are getting older and with that comes health problems such as worn out joints. It makes good sense that loom builders consider some modifications to their looms or at least have them available as options.  The 20+ tie up assist on my Woolhouse was one of those adaptations  and its very name means "twenty plus more years of weaving". I added mine after my hip replacement in 2001. It sure made life easier not having to crawl under the loom for tie up's.

Enough of my woes and lets get on with the towel project... 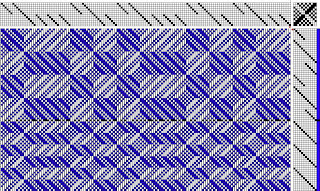 The draft came from Handweaving.net and is threaded like a turned twill. Its the tie up that adds the twist! The draft above shows the two variations I used separated by a black stripe. More on them later.

I used 22/2  cottolin that I bought way back when from Nordic Studios when it still resided in Canada. (It was later sold and evolved into the Lone Star Loom Room ).  My sett was 24 epi and my warp was 8.06 yards for seven towels. (see what I mean about not that long??) The idea was six towels for sale and one for us. I like large towels and so they were 25"  in the reed and a total of 618 ends. I literally had enough cottolin left for one floating selvedge only and the second had to be 8/2 cotton. The two pound cone was barely enough for the warp. I haven't come quite this close before!

My weft was 8/2 cotton from Brassards that I have on hand so this project was helping with stash reduction. 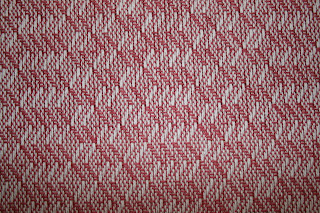 I found the treadling of simply going from treadle one to treadle twelve the easiest on my joints. The work was evenly shared by both legs and so after one towel woven  turned twill style, I went back to the simpler version and did the other six towels the same. I made each of them a different colour and once off the loom and edges secured by the serger they looked to be a happy bunch! (see the very top picture) 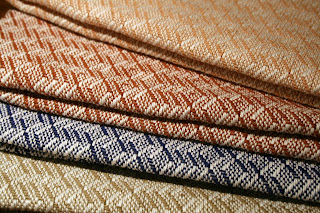 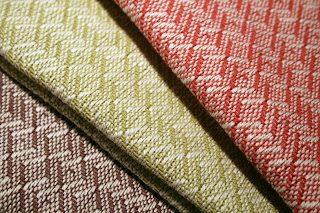 I enjoy hand sewing the hems. I also find there is no obvious stitch line like a sewing machine produces. It hangs smoothly with no buckling along the hem line. The sewing holds up nicely and I have a combination cottolin and cotton towel that was hand hemmed back in 1998 that is washed regularly and still looks great. Remember that sewing machines are a 'modern' invention and for many hundreds, if not thousands of years it was just the simple needle and thread.

They were washed and hung to dry out doors on my drying rack. I brought them in for ironing while still a touch damp.  The final measurements were 23" by 28" so generously large. 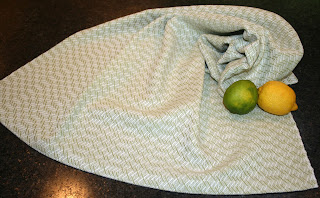 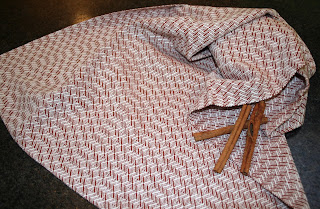 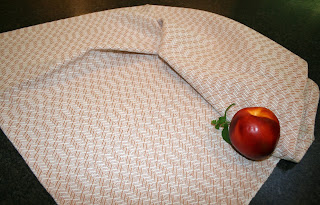 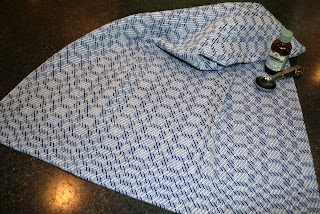 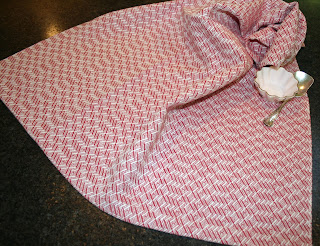 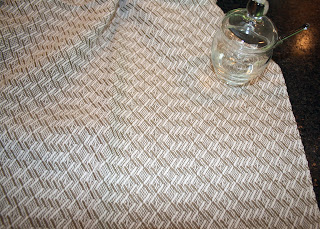 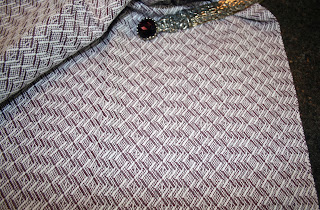 I also managed to get an additional square measuring 24" by 24" in plum which I'm turning into a table centre and crocheting an edging. I'll show you that when its all done. Then were even some samples for my records which is always nice.    This project was hard work but I took it one step, literally, at a time....

Hi Susan - your tea towels are really beautiful - a treasure! Yes, it is most annoying when "issues" get in the way of weaving, especially joint issues. You have learned to listen to your body and that is a good thing! I am truly thankful that I don't have to rely on my weaving for my income, it does supplement a little here and there, but mostly the income I earn just pays for more stash, which I am thankful for. Get your knee/leg in the best shape possible prior to your knee replacement. Weave what you can, when you can over the next year and be thankful for the time at your looms. Weaverly yours ....

Weeverwoman... I know how much planning and meticulous work goes into each and every project that comes off your looms. Your dedication sure shows up in the finished product!

I'll help you get through your surgeries and post-op recovery periods and will make sure I'll remember to feed you too.

Very pretty towels.
Joint issues and weaving are not best pals. The older I get the harder it is to crawl under looms. In another couple of years I will probably get rid of my larger looms and keep the small ones. They will be enough to keep me weaving.

What a great pattern. I feel for you that your weaving is being curtailed but glad you're able to get some weaving in.

You are so, so talented. As a new weaver, I find myself being inspired and intimidated at the same time. Just love the way you photographed your work, too! All best with your health issues.

Susan, have you considered a computer assist dobby loom, one pedal with air assist might just keep you weaving for 40+ years.

Your work is always wonderful and I so appreciate you sharing it with us.

The towels are so lovely, I love the pattern fand the colors!

Ugh. I am a knitter, and I have been battling my left shoulder and my right elbow, so I can relate. I am working on a baby sweater right now, and the pattern was written in Norwegian and (poorly) translated into English, and it is taking forever---I am having trouble understanding the directions, especially anything pertaining to measurements, and I have knit this $#$%^& thing twice, and it still isn't finished. I am going to stick with it, but I am starting to feel like I will be let out of some kind of Knitters' Jail when it is done.