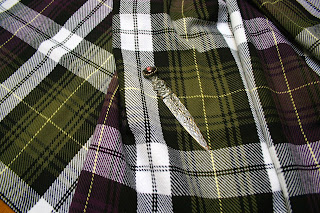 Are you following the television show Outlander?   Are you a reader of Diana Gabaldon's series of books?   I have been reading them for years and so the show is a nice extra!  I must admit to watching and thinking... "hey, that wasn't in the book..."  but they can't always translate every detail through to a show or it will take a zillion years to get the nine (yes- 9 and counting) books out!

I have always loved the interplay of colour that comes with plaids and tartans. Now, if I recall rightly, a plaid is any arrangement of stripes of colours that is also UN-registered. A tartan is an officially registered colour arrangement and associated with a clan, organization or person. Well, I think this is right.  This Wikipedia post helps define the terms and history.  You can also visit the Official Scottish Register of Tartans some time and browse. The Scots went around the world after the Battle of Culloden  in 1746 so most people can find a wee bit o' the Scots in their ancestry!

A few years ago I wove up Mackenzie #2 tartan as part of a towel exchange for the Guild of Canadian Weavers. It was bright and bold and challenging to weave.  Here it is on the loom and under way.  A true twill line is forty five degrees and you must be careful not to pack the selvedges in.   Sett is really important and regular even beat!   It was the first time I wove a long length of yardage and then cut apart for towels after.

I always remembered enjoying the experience and wanted to do it again.  With my leftknee bothering me of late, and using lighter four shaft patterns, now seemed like a good time!   I decided to use only what cotton was in my stash and I found that while I have a lot of 8/2 cotton, there's not a lot of any one colour except for the ones I found to weave these towels!  (It will be a challenge to use up the rest...)

I had recently purchased a warping mill as it was hard to stand still in one spot to wind a warp on the board.  This plaid was my inaugural warp on the mill and I was up to speed in no time!

Beaming and threading went well and I used the two stick start: 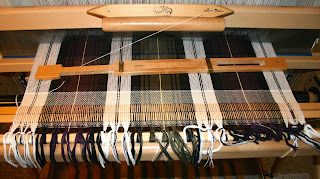 It just takes the threads and spreads the warp nicely and gives you a firm base on which to make a start!  I did use a temple as "draw-in" happens!  I just repeated the basic colour line up in the warp and repeated over and over again.... for all 8.3 yards! This is 8/2 cotton from Brassards in Quebec (love their quality!) and sett at 24 epi. I used a twelve dent reed. The warp is just over twenty five inches in the reed.  I'm allowing for draw in and shrinkage. I planned for seven towels at thirty four inches each (before hemming) and twelve inches for some samples (plus twenty inches loom waste). 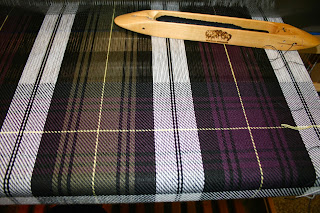 Okay... the weaving part.  I sat when ever knee and time, or even mood,  allowed.  So it did take some time to slowly work through.  We had a trip away to see my father one last time at the hospice. That was, to put it mildly, a gut wrenching experience and I came home quite numb. It was wonderful to have the (sometimes frustratingly) endless  repeats to focus on and simple weave away, and weave some more.

Soon I noticed the warp roll at the back was much slimmer and the cloth roll getting some nice heft to it! 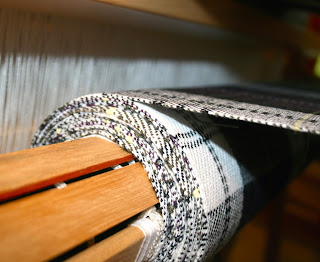 I wove right to the back of the four shaft heddles and used a stick shuttle for the last few inches .  I cut it off the loom and had a literal arm load of fabric! 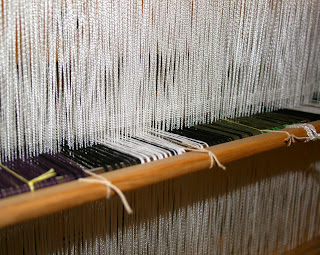 I had scrap yarn at the start and end of the warp which I serged neatly and then popped it all into the washing machine for a soak and wash.  After coming out of the dryer I pressed it all using steam.  Its time to cut the towels apart. 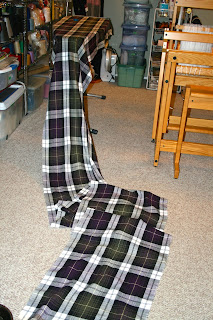 I measured the planned thirty four inches but it ended in the middle of a pattern area.  I guess that's okay but remembered my post about the Golden Mean and thought I would use the  computer program to help me with a nice proportioned towel.   The twenty five inches at the reed was now twenty three inches after washing and pressing and as you can see from the picture below, it recommended thirty seven inches!    Way too long!
Then I noticed that thirty five inches ended in a good spot with a natural cutting line.... all along the entire warp! So white section of hem on one side and the ending of a large dark colour block on the other.  It works! 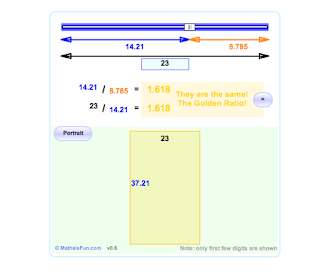 So I got busy and started removing the scrap yarn sections and cutting apart towels.   I ended with six towels and some small amount of samples.    Where did towel seven go to??   I ran through my calculations again and I had done them correctly.... so it would seem the take up for a 2/2 twill is far greater then allowing for three inches for every yard woven. Even allowing for the additional six inches lost to slightly longer towels.   An entire towel's worth in fact!   Geesh. 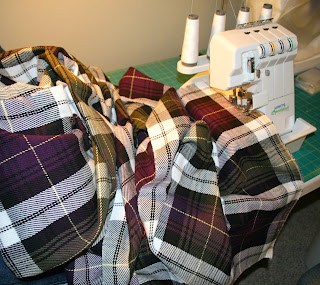 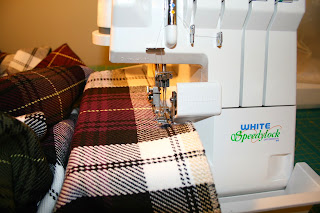 I did a simple small turn over for hems and pressed and pinned them.  One end was stitched using white cotton thread and the other end black thread. This meant that half was done by day light so I could see and the other could be done while we watched TV. They were already washed so a final steam press was all they needed.   Time for their "beauty shots"! 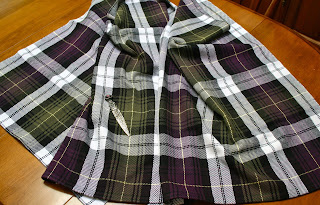 This three of them all draped on the dining room table, with an old dirk  letter opener we have had for years. Lends an air of authenticity I thought... 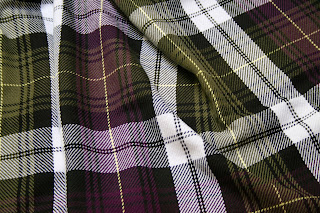 The cloth is lovely and soft to the hand,  drapes well and the interplay of colours is lovely. 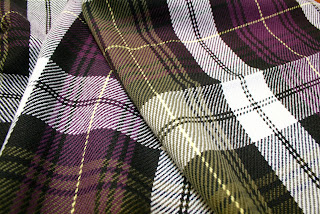 Here are four of the towels as the last two are to be hemmed still. 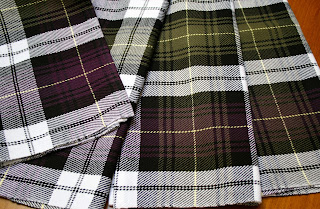 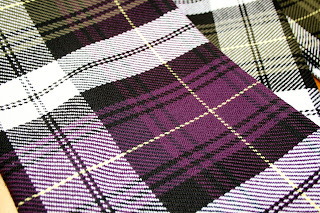 Here's the basic draft to show you my colour arrangement.  I used what I had to hand and then used the Murray tartan's basic striping to place my colours.  There is a yellow fine stripe and I choose a soft butter yellow over the brighter ones normally used.  (Reds didn't go with this grouping at all.) 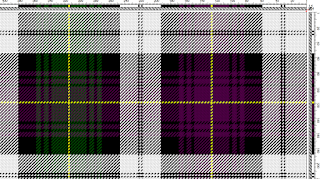 Why not try working up an plaid arrangement of your own? Its quite fun and a good way to use up yarn.  I found this Isle of Sky tartan on line recently and thought it would be lovely to try next?  I love the colours and think its quite feminine.... a shawl or arisaid perhaps? (visit that link to learn all about Scottish clothing, names and how to wear it properly) 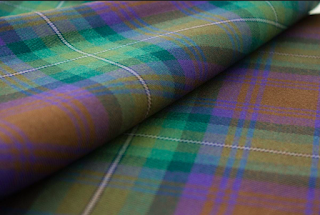 Thank you for your patience waiting for  my posts during a sad time for our family....  I'll leave you with a shot of the flowers we took to Dad on our recent visit. He loves roses... 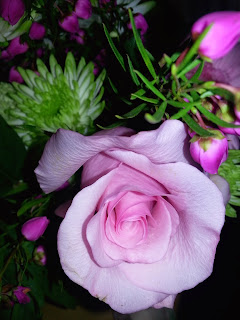 Hi Susan, - so sorry about your Dad, - I lost my husband, Charles, who I am sure you remember from our visit to get Honey.
I understand your sorrow. I am very impressed with your towels, - I am a Gabaldon fan too, - just hoping she will hurry with the next book now that I am 90! I made our boys scarves some years ago using the Thompson/McIntosh/Fraser tartan. It was thoroughly enjoyable and I still have a small bit of warp left and am tempted to put it on the Le Clerc. Like you I am using up bits and pieces and at present am warping some linen cones left over from former projects to make fine towels. Like you, also, I am finding it best to limit my time at the loom.....but enjoy it when I can!

Oh, Hildred.... we are both so sorry to hear of Charles passing. Yes, we remember him well. He wasn't sure about you and the big loom but he was soon helping you to tickle the loom up.

I'm so happy that the loom will stay in your family...

You had me at "Highland Heather", but I am positive you knew that! The towels are just lovely and the colors you choose work perfectly. I love the thistle clip art you have in the post, could you send me a link for it?

I send you lots of warm hugs and prayers for your Father. Pets for Callie too!

yes, its a cutie isn't it? I went to Goggle images and entered in 'Scottish thistle' and scrolled through pages of pretty pictures! I chose the clip art one so not to infringe on rights etc. Its there as well as some others that might suit you better.

I's send it directly to you but I have deleted it already. (or you could nick it from my page?)

So sorry about your dad, Susan. It's really hard to say goodbye to a parent.

Love your plaid colours! Those tea towels will be fun to use. I haven't read the Gabaldon books but enjoyed the series. Not too historically accurate but who cares?

Hi Susan,
So sorry to hear about your dad!
As an "Outlander Fan" myself I love, love love your towels.
Barb

Losing a parent is very hard. Sincere condolences. Your towels are incredibly beautiful and well woven. How do you manage your weft changes?