A Pause in Production

It hasn't been one of my better weeks. My weaving and pretty much every thing else came to a full stop. I developed the mother of all migraines and it stayed for four long days. I did manage to get 80% of my Christmas cards done (slowly) so it wasn't an entire bust. Today is the first time I have felt okay, but still a bit fragile. After seeing our doctor I'm now armed with new migraine medicine which must be taken at the first sign as the head pain starts as later is ...well, too late!

So early last Tuesday, before the headache hit me, I changed colours on the towel warp and this is the start of towel # 7 of 8. 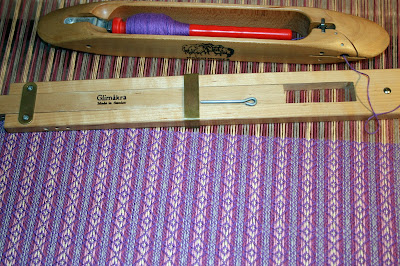 This towel has a bright violet weft. It's some 2/8 cotton that I bought for a song as it's too softly spun to be used as warp. It's perfect for weft though and this is the first project to come along where it can be used. The yarn actually makes a 'zip' sound as it runs through the end delivery shuttle!
I have something like four or five half pound cones of this, so best think of some other uses for it. The sale tag is still on the bag and I spent $2.00 for 2 1/2 pounds of yarn. Not too bad huh?

I'll get back to weaving tomorrow on both ongoing projects. But I went looking for the calendar that I contributed to with the violet silk/ wool blend that I mentioned in the last entry. I found it finally and I almost had the year right.... it was actually 2001. The Kelowna group: Ponderosa Weavers and Spinners Guild had produced a calendar with one sample for every 2 months. It went very well, and raised some needed funds in the bargain. Now, I was going to show you the cover of the calendar but Blogger simply will not load the image without turning it sideways. *really annoying* I have no idea why it does that! But here are some of the samples featured in that group effort: 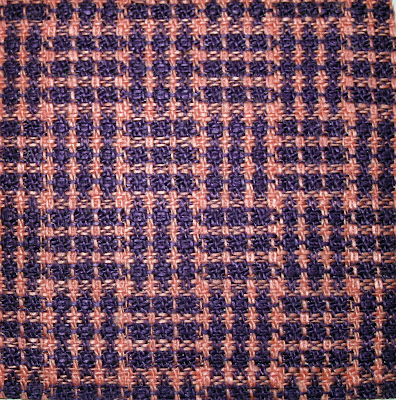 This sample is 100% linen and woven by Linda Heinrich ( author of The Magic of Linen) It's threaded and treadled in rosepath with alternating colours in warp and weft. 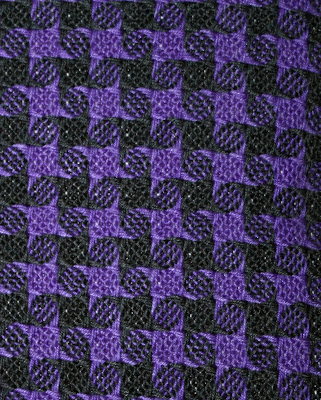 This is the sample that I made. It's a 60/40 silk wool blend, sett at 32 epi and a classic colour and weave check or pin wheel. I dyed both the colours. The yardage was beautiful and I had an offer from a neighbour to buy it from me and have a tailored jacket made from it to go with a charcoal wool skirt she owed. I was tempted! 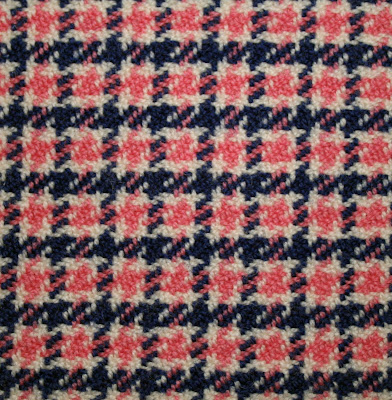 This classic 2/2 twill colour and weave was woven by Christine Kirtz in 2/12 merino wool. She was also the calendar project organiser. 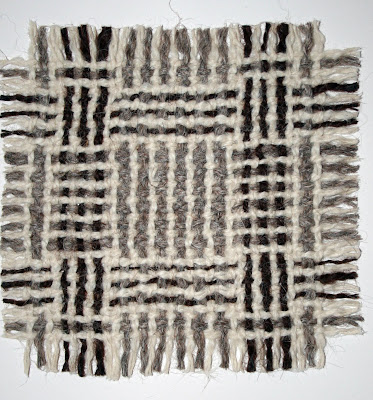 The sample above is an alpaca 'log cabin' and was woven by Ellie Morstad. I believe the warp and weft was handspun and there were some difficulties with weaving it due to separation under tension. 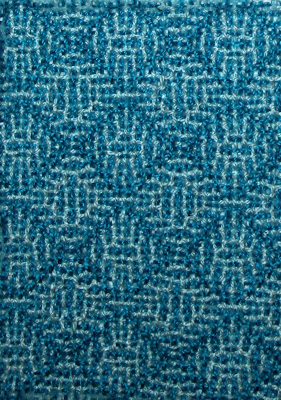 This is a shadow weave woven by June Kiewitz and Lyndsay Topham. They used orlec in two colours that are quite similar. It has a much more subtle effect over the usual very dark and very light contrasting colours normally used. 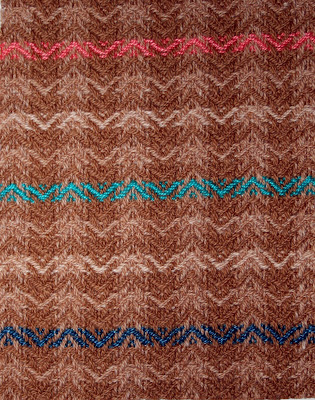 This last sample was woven by Julia Proulx and is featuring (mostly) naturally coloured cotton and I suspect that Blogger has turned the image on me! You don't hear too much about Fox Fiber Cottons anymore. Do any of you know if they are still in business?

I'm a big fan of samples and swatches and have four 3 inch binders full. I like the way they stir up the creative process. For injecting more colour into my projects I love looking through National Geographic magazines. When they feature a spread of full colour photos taken from Nature, it always amazes me the colours that coexist side by side in Nature....

Buyers of our handwoven goods and weavers in general are drawn to the colours for the energy and lift they provide but we tend to wear neutrals ( such as beige's and blacks) and be quite conservative in our homes. I'm sure this would be great material for a study!

News about the sale I participated in: Nothing sold unfortunately. It seems that people are really reconsidering what they are buying and how much they are spending this year for Christmas.
Are you adjusting what you are weaving as a result? I think I will weave what I normally do and worse case scenario, I will have a good war chest for sales down the road when purse strings loosen up again.
See you in a few days when I'm back up to full speed again!
Posted by Susan at 5:00 PM

Email ThisBlogThis!Share to TwitterShare to FacebookShare to Pinterest
Labels: samples

The violet weft on the tea towel is wonderful. I'm completly enamoured with clear strong colours on tea towels - makes me want to use them. I loved seeing the samples from the Ponderosa Weavers Guild - inspiring.....

Miss Susan!!! Your sample is my favorite:).....and I absolutly LOVE your attitude about your sale!!! I think it's important to know that your work is top of the line and when thing roll back around you'll be on top of the world!!! I pray for no headaches and a sold out next show for you;)

Susan, I'm so sorry to hear about your headache. I hope now it's gone for good.

Those samples are stunning! Very inspiring. (And boo on Blogger, I've had it do the turn-the-photo-sideways thing before too. Most annoying.)

I loved seeing each and every one of those samples- beautiful! I looked at them all before reading your text, and I was happy to find my favorite (the pin wheel) was your work!
Hope you head feels better soon.. I think I've been getting sympathy pains (or I really need to get glasses again soon :P).