I needed a break from the intense focus needed to treadle on the Louet loom! I also wanted to get Emmatrude, my Woolhouse Tools countermarche back in service again. I seem to have some default patterns I wander back to when it comes to tea towels and I wanted to try something new! Towels can be like full sized samples and give you a chance to try new weave structures. I flipped through past issues of old magazine such as Weavers and Handwoven and then looked at my (real) sample collection and moved onto  my few issues of Väv magazine. I subscribed briefly but sadly let it drop due to the high subscription rate. I found a pattern that appealed to me in the April 2006 issue and one I'm calling my "Swedish Stars". I have modified the stripe pattern from their version and I was happy as this was a straight forward draft and would be an easier treadling then my other loom! 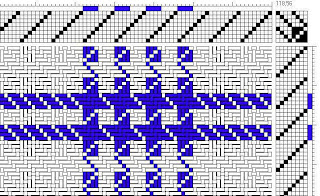 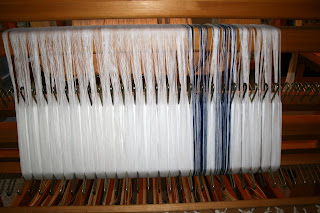 As you can see I used my hybrid sectional method and my stripes are off centered. I'm trying to change pattern, stripe placement, colours.... everything! 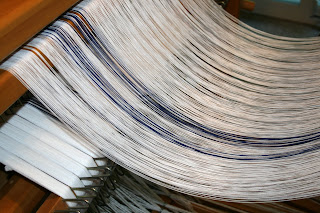 Next up is threading and its a nice straight draw of eight down to one. I still paid attention as its easy to get a flat with a run like this. 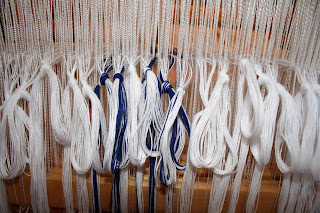 It feels good to see a task completed! Sleying is done two per dent using a 12 dent reed. So far so good! 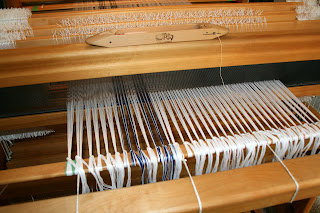 All set and ready to go except for the tie up.  Countermarche looms have twice the number of cords compared to jack looms and they must be tied up to both upper and lower lamms. They separate the threads equally up and down so both sides of the shed are equally tensioned.  Jack looms only lift up half the threads and the weight of the shafts and metal heddles 'dip' the bottom threads and that's why you need a shuttle race and I don't. I throw my shuttle across tensioned threads.
Now I have a 20+ tie up assist and it requires some 'mental gymnastics'. When you stand at the front of the loom, take note of the first treadle is to the far left and shaft one is directly behind the beater....... then you go to the back of the loom and you see this (picture is from a previous project) 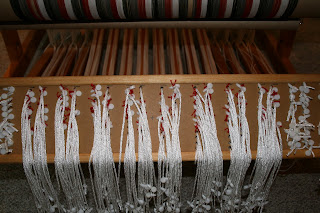 The very top row of holes is shaft one and the bottom are shaft 12; the far right is treadle one and the far right is treadle 16. There appears to be a lot of cords, 384 in fact, as there must be a tie up point for each treadle and shaft but I'm only going to be using the centre eight as shown above. So as you see it's flipped and reversed!  I take the tie up grid and rework it so that its becomes upside down and flipped. Its easier than it sounds. Just the first time is confusing... (honest!)
I like to call the dark squares on the grid " x's " and so by default the empty squares become "o's". I tie the x's to the upper lamms as they will go down when treadled and the o's go to the lower lamms as they will rise (think bubbles!)  With me so far?  good..... 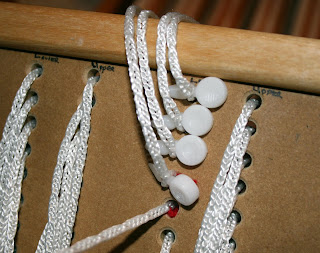 Now with the 20+ tie up assist you translate the routine I just mentioned above to the cords and clips. If there is an 'o' on the grid, I go to the right holes for shaft one (at the top) and pull and clip the corresponding cord for the lower lamm.... and leave the opposite cord trailing free. The picture above shows a series of o's  on a grid. The cords on the right would all be the x's. You only pull one on either side.
Still with me?  :)

I sat down and pulled out the locking pin and eased the treadles so the cords between front and back could find their way and ease. Wove in some scrap yarn and looked for errors..... and , none!   I wove in plain white for approx six inches and then thought to do some rows of stars and that's when it all went sideways....
No stars.... nada, zilch!  So I double checked my threading, and then thought that perhaps I should reverse the tie up. Make it so the o's and x's change place. Its obviously means I'm weaving the stars upside down then which is no fun. I'd rather see them and know its going well! I'd hate to weave  10+ yards only to find there's no stars on the other side too. So I reversed the tie up and tried one again. No Stars.


I went back and flipped the tie up... and basically to shorten this story up, tried just about every possible way you could tie this up and  finally got stars! 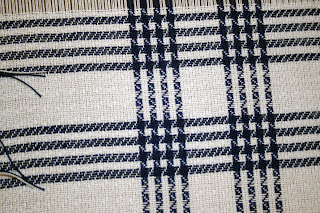 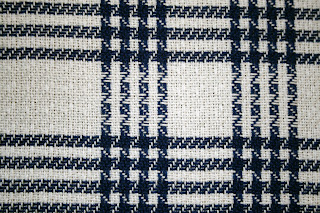 There are perfect white stars on the opposite side too! I have no idea of how I did it other than tried every possible combination. I'm glad that this wasn't a normal tie up loom as I would be still under there tying cords! I just sit and pull cords and clip although that took time enough when you do it several times. :)    I'm on towel number two now and so its underway....

Later that afternoon as I was clearing things away (yes, I tidy up.... sick huh?)  I looked once more at the draft on the magazine and that's when I saw it. They show the draft REVERSED from the way we do it over here in North America and so the tie up was reversed as well....  ah, geesh....

So moral to this story: always read the fine print!
Posted by Susan at 11:49 AM

Love the stars !! I'm jealous though as I never got stars !
I will need to be careful if I bring back drafts from my trip to Sweden ! May need a further explanation on what they do differently !

The tea towels will be very classic and will sell like 'hot cakes' I have a feeling !
Dorothy

LOVE these towels!! ...and you know how I do love the vicarious thrill of your weaving on this sweet loom! I think I'm still scratching my head over the reversed tie-up thing. And how validating for Dorothy!!!! ....missing stars, indeed!!
...and to think we call this madness FUN!!! I think I'll be happy with wrapping my head around your 384 texsolve cords and leave the reversed tie-up for another day. Always a pleasure to see shat you're up to, Susan!

For those of you wondering why Linda is so stoked about my loom.... she has one on order and so will be doing some showing off of her own sometime in the near future!

What a performance! I get my head stuck like that too sometimes (deflected double weave tie-up - just shoot me now...) but the stars were worth the effort. Really pretty.

Beautiful tea towels. Interesting how the patterns are reversed in the draft from Sweden. Perhaps you could contact your local library and see if they would order in Vav Magazine, then you could take it out on loan. No harm in asking.
Weaverly yours .... Barbara

Susan, you get your loom warped so fast! I am still winding my warp, but it is an all over version of what you are doing. I will have to try yours later (or maybe it is just because you are not using a contrasting colour all the way).

I'm curious; are there faint stars in the white on white sections?

Love the stars! I totally understand about the tie-up: On my Barbara V CM loom I have to sit. Quietly. Contemplate my navel. Re-read the tie-up. Countermarch is crazy-making, but once it's done, I love it. I have wire connectors to "pig tail" hooks; rather than upper and lower lams, there's a direct tie-up to lower lams (to raise the shaft) and shafts (for those which drop down), so I also have to translate tie-up directions! Yikes! Then one pops off in the middle of a pick... Yikes again! But all in all, I do love the big girl and look forward to many years of weaving (and learning).

Snort! I went through all those same problems when I wove this same pattern in red and white cotlin and I came to the same conclusions that you did.

Silly us, sometimes I think we don't stop and read ALL the fine print, at least I don't.

Your towels are lovely.

By the way what have you decided about teaching? I did not comment on your last post because I am STILL mulling over your request and have come to no conclusions that might be helpful to you.

Please give Miss Callie a big hug and a kiss on her head for me.

All I can say is that 'great minds think alike'! The Shuswap Guild put on a warp a few weeks ago, and , yup ~ same pattern! It went with us to the Interion Provincial Exibition and was woven for demo purposes. The warp was natural coloured cotton with soft blue, green and rose stripes....someone was reading the same Vav!
Your tea towels and colour choices are beautiful and the stars blow me away!

The towels are lovely! I can understand your amazement when no stars appeared! But I could have told you, since I am always re-writing American drafts to be like the Scandinavian drafts I am used to!! And even aftyer all these years I can still get confused unless I actually write out a new draft on graph paper!

Do you still have your Barbara V? What is your opinion? Lyvon

Will....
Sorry for the delay in replying. Seems my notifications for comments were turned off. I don't own a Barbara V loom and never have. I know that Theresa of CampRunamuk blog had one for a time...