Right up front, this is a non weaving post! Sometimes life interferes with our pursuit of all things weaverly. I try not to let it get in the way of my shuttles but.... apparently Life right now insists on my full attention.   :)

We use well water here at our home and have installed a full water treatment system to keep it clean, soft and healthy for all our needs. We draw it (legally) from a shared well on the neighbour's property and then it travels some distance up a hill to our home. Water loses pressure when it travels up a grade and so our water pressure has always been a bit of an issue for us. The neighbour? he has LOTS and us? Not so much! The pressure this summer has been steadily going down to the point where if someone wants a shower, no one dares turn on a tap and even then the person in the shower has a nice dribble!
Awkward is one word I can use.... the rest are not lady- like to write here!. I have been caught all soaped up and there is no water at all until either the offending tap is turned off or the toilet tank is full again.
The dish washer runs at bedtime when there is no danger of interference!  It hasn't always been this way and our thirty year old home has had this shared well arrangement for all of those years and various owners of this house with limited success. We have always been water conscious and after living aboard a boat for five years with only 300 gallons in the storage tank, we are quite conservative with water usage. We just naturally fell into our old habits of  notifying each other of water events. "I'm going to water the gardens" meant reduced water in the house. We haven't watered lawns at all this year except for some newly sown areas after last fall's deck rebuilding.  The neighbour and well owner unfortunately wasn't helpful with solutions and quite grumpily said "its your problem" and hung up on us. (Some of my un-lady like language was reserved especially just for him).

So we began our research of the existing lines from the pump house and where they might be located. After thirty years where documents say they are and where they were actually placed are two different things! The codes and practices back in the late 1970's were quite different to what is done now. At best the pipe runs through a swampy area and even under a creek according to a former owner from that time period. Not allowed by today's standards !
If the galvanized fittings used in the 1970's have corroded, as one plumber thinks, and we were lucky enough to find and replace them, then some of the issues we have still exist. Lower than normal water pressure, a thirty year old system and a cranky neighbour who still owns the well!  So even a booster pump and cistern wasn't going to work and be quite expensive to boot!

What fix is the best use of our money and solves all the problems for us once and for all?

You drill a well. 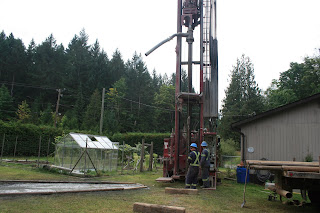 Click to enlarge.... this was taken today and at this point they had gone through nineteen feet of overburden and and were just heading into bedrock. The wells in the area that we know of are all at about eighty five feet and produce ten to eleven gallons per minute, so this should come in at under one hundred feet. The exhaust is spitting out fine clay, surface water and now ground rock.  Its a messy process! 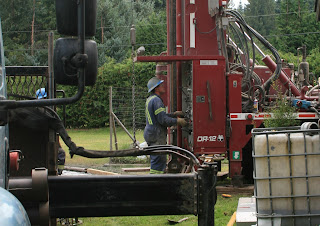 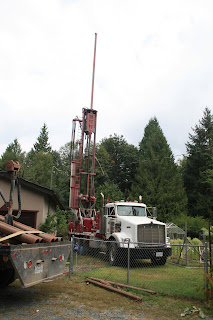 The height of the drilling rig is up at about fifty feet +/-. The length of the pipes are twenty two feet each and they are called casings. Apparently the well will be drilled, and capped by the end of the day if all goes well (no pun intended!) 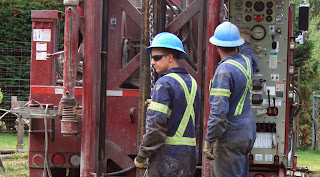 Hard hat zone so I didn't get that close!  Noise was a bit hard on the hearing too. The cranky neighbour might know something's afoot by now. His well and (possible leak) is about to be entirely his problem.

Bruce and Calli were checking out the meadow when I arrived on the scene with camera in hand. 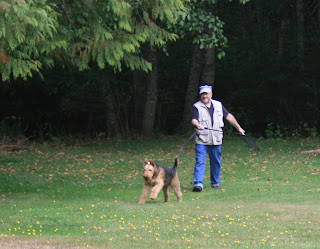 Here, she had just spotted me and came running right away! 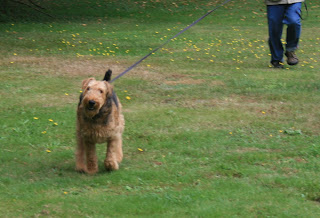 This one isn't entirely in focus but I like it anyway.... if you enlarge it, you'll see she's smiling!  True story!
There will be a lot more to this water story as there has to be a trench dug up nearly three hundred feet to the house and the electrical and plumbing hook up's done before we drink our own water.  Won't that be sweet? I will celebrate by flushing while in the shower and run the dishwasher all at the same time..... just the once!


Water report to be continued....at a later date....
Edit, 3 hours after posting : by days end they had drilled 182 feet and we have water at 6 gallons per minute. A bit deeper than we were expecting but feels good none the less! 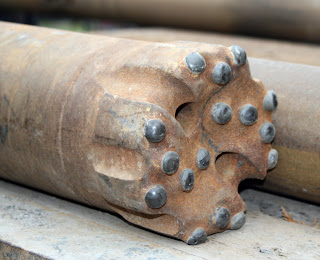 This is the end of the drill bit.... not sure what those nubs are made from but you know it must be hard to drill through bedrock! 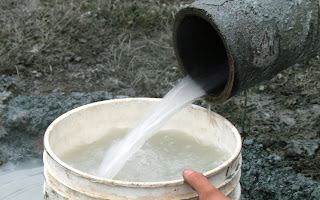 ... and here's the water!  Not as many gallons per minute as we hoped for but enough at 6 gpm!  They run a stopwatch as they fill the five gallon pail and work out the rate. Boy, was the neighbourhood ever quiet when they stopped!
Posted by Susan at 1:41 PM

wow, as I've been reading I kept saying drill a well, drill a well.....and I was thrilled to hear that you DID!!!
Good choice.

I'm reading in depth report (pun intended) while eating my breakfast in Paris! So good to know that next time we visit we won't do the 'flushing faux pas' again! Love to see new photos of Callie too!

Yikes! shared wells and driveways can be risky business.
Glad you got your own well though. 6 gpm isn't much
but as you said, it's enough. I think we had to go down a little over 200 feet but capped off at something like 32gpm. Did they require a water witcher? Ours did. The comment when I asked the owner of the drilling company if he believed in dousing the answer was something to the effect of it was worth it to have someone to blame should you not hit water. I suppose that it's just as good as anything when faced with 25 acres of wilderness as to where to put the well and I've seen dousers find water lines and long forgotten septic tanks too! It's been a long time since I had a dog that smiled. Lexie did on occasion and when greeting people. They always thought she was growling when lifting those lips to show her pearly whites.

Well, I certainly don't envy you the mess, noise, or the bill that undoubtedly accompanies that....but the end result will certainly be priceless. Is a shared well typical of that area? I don't know that I've ever heard of an arrangement like that.

It's going to be so nice for you to finally have water pressure! I'm excited for you! My in-laws have problems with their well and pressure pump from time to time and it can be very frustrating. Makes me appreciate my city water with it always being there and with enough pressure. I sure miss living in the country but I don't miss well problems. Good luck! :-)

Congrats on the new well! I would love to put one in, but the neighborhood wells average over 1200 feet deep, so that is not in my budget.

With all the trucks and equipment gone, and there's just a 2 foot high metal pipe and end cap sticking up out of the lawn. Doesn't look like much today! Then there is the great grey streak of rock and sludge to deal with. Apparently this finely crush rock slurry makes great pathways ( and nothing grows in it for years!)
The crew were quite interested in the rock chips as it is full of quartz and iron pyrite (fools gold)
We have a large rock formation behind the house on which we have rock garden plants. There is a streak of quartz crystal and a sprinkle fools gold nestled in the ferns and plants. I'm trying to imagine the convoluted path this vein takes if its at the surface by the house and is at 162-182 feet underground only 300 feet away!
My old high school geology is loving this!

When this area was developed many years ago and some of the oldest documents we have are dated 1936, when the then owner (a single woman!) divided into parcels where each 2 or 2.5 acre parcels shared a common driveway and one well would provide for 2 (or 3 homes) We learned of one well tied into 5 homes the other day! It was a way of reducing costs at the time and get occupancy permits. Over the years many dug their own wells and hindsight says that one of the previous owners of our property should have dug one too. But I think it was case of "hey, it works!" and 'maybe next year?'

The realtor who was handling our home sale earlier this year says it adds real value to our property now as we have a private well for the house, a shallow well for irrigation near the gardens and access to the shared well which is still in place and legal and so we have gone from not enough to plenty for all!

We don't mind the shared driveway at all as with the property running up the centre, it means there is more useable land for either property owner. The costs for grading and road base has always been equally shared for the shared portion. Snow removal? Every man for himself!

We had to drill once too. We had a 14 foot hand dug well but when we got our water tested before we sold our home it was contaminated. The drilling outfit looks a lot like the one you had. I don't exactly remember the details but do remember that I counldn't wait until they were finished.