Late for the Party 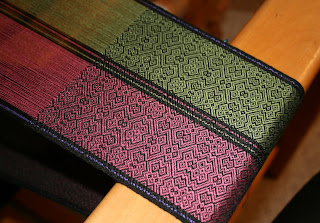 My big loom 'Emmatrude' has been very patient this year. (She is a Woolhouse Tools floating parallel countermarche, model name Gertrude) Not much happened on her while I dealt with life issues such as my cranky lower back. I found my loom bench aggravated my sciatica and my 'fix', the big black chair has been working  very well and I find I can weave longer sessions which is fantastic! I'm under no illusions and I listen to my back and rest when it tells me to.

My Louet is busy right now... but more on that next time!  :)  I am keeping the other loom busy with a series of three scarves. The warp is 10/2 tencel and the weft is 30/2 silk; sett is 28 epi and it's approx 7" in width. I was given a dusty rose pink skein of tencel some years ago and I was challenging myself to team it up with other colours and put it to work (stash busting?) Perhaps I saw too much dusty rose and sea foam green back in the 1980's and so the rose skein has sat a long time waiting its turn. I found a mineral green, violet and black that seem to work nicely. The colours are all medium hues and so of similar values.
The threading is a fancy 8 shaft point twill and here's the draft for scarf number one (which I'm still weaving on the moment, but in the home stretch!) 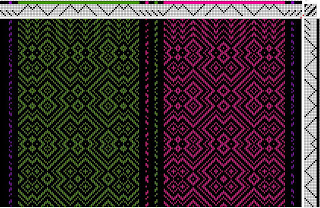 The scarf in the picture at the top of the post shows it being woven 'as drawn in' or the old fashioned 'tromp as writ'. Since its boring to do the same thing over and over, the second scarf will look like this: 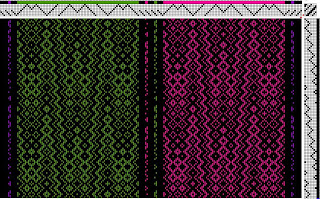 Same threading but now the treadling will be network. Changes everything doesn't it?  I love to be able to play with the treadling possibilities on a screen. I can even view the back of the work and then check for  overlong floats in warp and weft!  The colours are much brighter than the ones actually used but I was okay with 'close enough!'

I have been playing around with variations for the third scarf and thought this one is a good contender and may happen. We'll see. I'll continue to play with choices while I work through the first two! 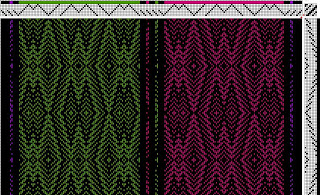 This treadling is is a twill progression such as you would find in a snowflake twill. I'll have to try a sample to see how it works with the real cloth and colours to see if its a go.  Its too bad that these weren't ready in time for the coming sales, so they are officially late for the party!

So if you have a long warp on and want to change the project, try changing your treadling sequence! Its amazing what appears when you dance the treadles!

I have also been busy preparing for sales like many of you are doing as well. I spent time going through my hand wovens, tagging and making up inventory sheets.  Happily, they are all coming at easily to handle intervals this year! I divided my items into two groups with newer items going to be set up on display with other guild member's contributions at a month long sale in Mill Bay, BC. It runs Oct 30th and closes Dec 1st. I'm on the list to sit a couple of shifts at the sale, but not until the 17th and 30th of November. I'll have to go in much sooner than that to photograph the entries before they all sell!

The balance will be mailed off to a one day sale in Salmon Arm which is in the south central interior of BC, held by a guild that I'm still a member of despite having moved away. They are such a great bunch of ladies !

Last, but not least... one of the benefits of my recent stash collection clean up was the rediscovery of an antique! I bought this from a friend some years ago and the general consensus is that it was new in the late 1950's or early 1960's. I'm the third owner of this little machine since then. It still has the original cloth wrapped cord which makes me a bit nervous! I did replace the rotting cotton cloth on the roller with some new cotton ticking. 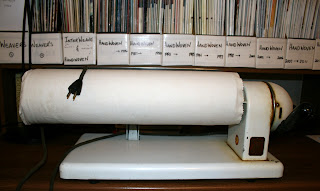 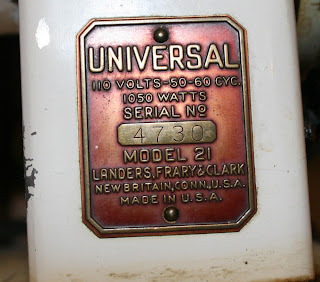 When plugged in, the roller turns and I believe (if my memory serves me right) you pull the lever on the right to to snug up the curved metal plate  at the back. It holds the cloth between the metal plate and the roller and presses it in a continuous rotation, with the cloth being slipped in the top and rolled out the bottom. No steam but I can recall that two or three pressings gave good results.  I guess you could mist the cloth before slipping into the roller!

Hubby watched me trying to hard press towels this week on a conventional ironing board and hinted that a steam press might be in my future. That sure would be sweet but with a new well and plumbing, I think it might have to wait a spell.

As a parting shot, one of the items being pressed up and prettied for the sales is the 12 shaft snowflake twill shawl. Rather than fold it up, I thought it might be nice to look at it for a short while until it ends up around someones shoulders for Christmas! 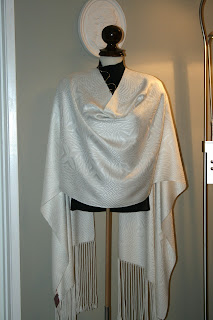 I'm glad to see I'm not the only person who has a name for his looms. My loom at home is called Big Bertha, she's an expansive girl and doesn't mind taking up a bit of space.

My first loom was called Tiny Trish and was a Weavemaster 4-shaft table loom. She now lives elsewhere.

At college I work on one of serried ranks of anonymous George Wood Dobby Looms, each one with it's own personal issues and all of them needing therapy and some serious argument before they can be convinced to weave at any decent rate without throwing shuttles into the air.

On a more sensible note, I love the colour combination there, it's very nice indeed and I am very envious of your dangerous looking roller-press gadget

I have one of those! Mangle that is - second hand vintage type that sits on the table. They are wonderful!

Well, it is a treat to see that gorgeous snowflake shawl once again before it moves on to its lucky new owner.

The treadling changes are amazing. I always assumed that 'network' had something to do with having a gazillion shafts and a computerized set-up. Here, you've used it on a 'regular' loom. So what 'defines' 'network'? You certainly have some fabulous variations possible. It's a nice pitch for moving to the drafting software, which I tend to avoid since I spend all day on the computer at work and don't want to do that for weaving as well.

..so once again, thank you for sharing your experiences via your blog. Always good information to process!! (...and always good to see what Emmatrude is up to!)

Hope all is well with you and yours, Susan!

Thank you all for the comments!

Evelyn: Do you have a product name for the mangle? I can't find one anywhere. The plate I photographed is the only identification on the gizmo. Perhaps its called a Universal?

Linda: Changing the treadling does so amazing things! I do agree that it does sound like an ad for weaving programs, but they help so much to speed things up and enable the weaver to see things *before* you outlay time, effort and money on yarns. This gives you better outcomes, and more time actually weaving. The alternative is to use graph paper and work it out the old fashioned way (ah, no thanks!)

I will have to look up the proper definition of network but if you look at the treadling sequence its a twill progression ( 12345,432, 34567,654,45678 etc) I believe Alice Schlein (sp) has written extensively on network twills. If you have Madelyn vander Hoogt's Drafting book, she covers it in there as well.

Emmatrude is being kept busy again and it feels good. Its like having two children and tryng not to play favourites.

Hi there - today it lets me comment, yesterday it didn't want to know me !!
I love the way you change the treading to make such a different look to the scarves. I don't seem to be very good at playing like that.
Maybe Christmas will bring a steam press do you think ! I see Evelyn calls your gadget a mangle, In Scotland a mangle is what they used to wring out clothes when the were washed. Two heavy rollers and a handle to turn them squeezed the water out !! Childhood memories !!
The shawl on Madge looks stunning and will sell instantly in the sale.

As always, Susan, your weaving is so beautiful and inspirational! You somehow manage to put together such interesting colors and patterns.. I aspire to your abilities! And, as everyone else has said, your snowflake shawl is very luxurious looking and sure to sell. Just lovely!

Altogether stunning. Your weaving is exquisite.

I'm looking forward to getting the package of weaving for the Shuswap sale.....I'll just pretend that it's all for me!

The scarf is fantastic! I love all the pattern variations you have planned. Mind-boggling to a warp-faced weaver! ~Annie