So we got word today that the baby is getting a nudge to come out this weekend and Mum will be induced on Saturday. So either Saturday or Sunday will see a new little person arrive and join  the family. There are three great grandparents, three sets of grandparents, parents, as well as many aunts and uncles, cousins, and family friends all waiting to say hello! Geesh, no wonder they don't want to come out!

After tackling some spring window cleaning, my lower back told me to behave so I left the big loom alone and focused on the Louet Spring. I have (had) a tricky project on there and I decided to get it worked out and woven off.... and get it off the loom. {more on this project next post as its still being finished right now}

I immediately prepped the loom for another project that has been sitting waiting for its turn.  I had to enlist Bruce's help to wind it on as the fine 40/2 linen was twisting on itself and I didn't have enough hands! Then the loom was hoisted up onto crates for its new tie up of twelve treadles for the twelve shaft project. 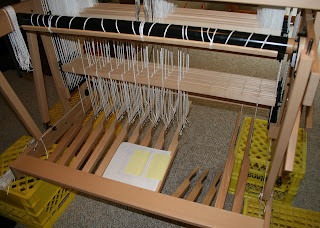 Past the half way point! 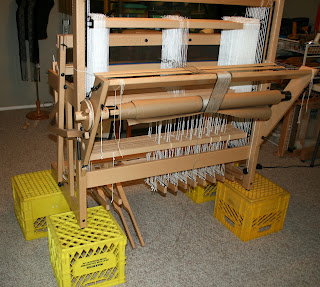 Doesn't look very dignified does it? But it works well and sitting on a low stool keeps me off the floor.
The warp looks rather narrow. Its actually only 2.5 inches wide and is 48 ends per inch. Its a repeat of  the book mark project, but this time I'll be weaving 19 or 20 of them. Well, that's the plan!
I was feeling pretty good so thought I would weave off the last few inches of the receiving blankets on the big loom and also some samples. It didn't take long and they were cut off the loom. 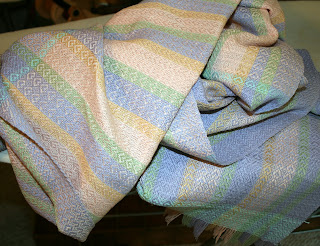 I like to go around the loom after a project comes off and do a tidy up and vacuum all the lint and dust up. I had cheated last time and skipped the vacuuming part so I had the machine sitting ready this time. One really neat thing about having a loom with a 20+ tie up assist is that you can do this: 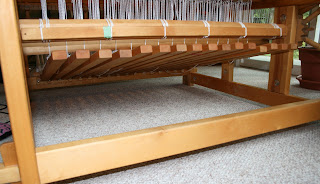 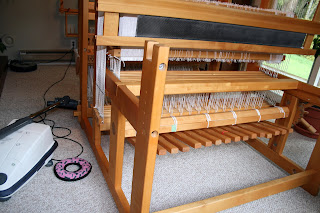 I'm able to pull up all treadles and then vacuum underneath with little interference....except for a certain 'Fur-face" who stuffs her toys underneath the treadles.  I also used the brushes on the loom to get all the lint, especially on all the cords. 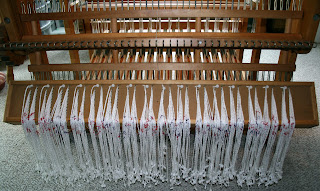 Here's the view from the back in 'vacuum-mode'.  I know the cords look intimidating but remember I only use a small portion of them at at one time.  To use all of them I would be using all twelve shafts *and* all sixteen treadles. (Some summer and winter drafts could come close to this.) Anyhow, back on topic here... I was vacuuming the cords as they run along the top of the treadles and saw a big 'fluff ball' and aimed for it.
It did not go up the hose. It stayed put. What the heck?    So I took a closer look.... O.M.G.! 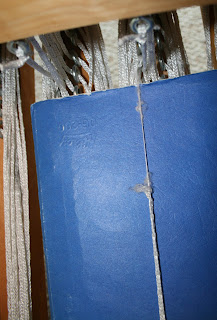 I slipped a note book in to show the problem better. This is one of many, but it is the worst of the bunch! How I managed to weave off the receiving blankets is beyond me! Texsolv is one tough cord as that is handling the weight of the entire treadle, shafts and lamms!
How does this happen? Well, all my tie up cords run down from their spots on the upper and lower lamms and then travel through eye rings set in rows on the centre of the treadle. One eye ring for every cord and every cord has it own sequence. 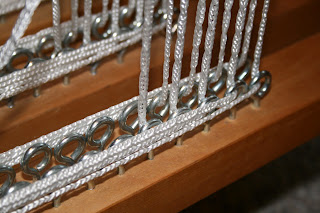 This older picture shows the cords in the process of being set up when we moved here four, nearly five years ago. Upper lamm cord goes down one side and lower lamm cord runs on the opposite. This is where all the rubbing is going on during the weaving! Pulling the cords to their extreme position exposes the damage. Somehow I'm glad I missed the vacuuming last time as it would have stopped me from weaving these receiving blankets. Since I did,  I'm grateful the cord hung on like it did!
Most of my projects use anywhere from eight to ten (or sometimes twelve treadles) and I normally use them centered under the loom, so the outer two or four on either side are rarely used. The centre bunch get stomped on time and again... and all are running and rubbing in the eye ring. What you saw was the result of many years of much treadling!  Moving parts will wear out.
A phone call later today with John at Woolhouse Tools and it was decided that it is best to replace all cords in the centre twelve shafts and twelve treadles so I'm working on a clean slate. The best of the older cords can be used for future repairs, which you know is going to happen at some point in time.
With the cords on their way, the loom will be stripped of all cords and it seems to me to be a good opportunity to clean the old gal and give her a much needed oiling and tune up. She's earned it.
Okay, that loom is now out of action.  I guess weaving 20 book marks using fine 20/2 cotton weft on the Louet Spring, and all that hemstitching won't exactly be a snappy project!
In the mean time I have some hemming to do! 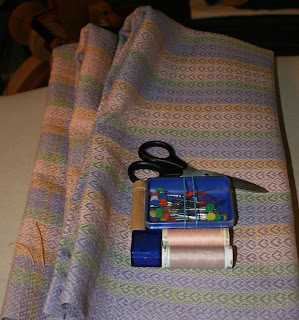 Oh my goodness, Susan! Good catch; and just in time to avert disaster in mid warp! I shudder to think of the day that my shedding dogs will be in the same area as those texsolv cords! With a little loom, I can keep the animals away; but that will not be possible when the Gertrude comes. We will worry about that later. I did get a kick out of the dog toy! The blankets are so lovely, and will be such a great way to welcome your new baby in! I love that you are able to put that Spring on crates in order to thread without irritating your back! I do look forward to more of those amazing book marks. I'll be paying close attention, because I have a bunch of 40/2 linen that I haven't mustered the courage to use yet, but am strongly considering gebrochene fingertip towels. Congratulations!! Enjoy that new baby!!

Wow...what big maintenance project you have ahead of you! So glad they stayed intact for the receiving blankets.

I've abraded through texsolve cord on my Mountain Looms table loom that I use for workshops. The loom has a tabby tie up that goes through muliple eyes, like yours. Those were the cords that abraded. Not nearly as big, or expensive, a project as yours.

Best of luck with that.

The receiving blankets are so pretty. What a great idea to handweave them.

Wow, getting all the new Texsolv prepped and on the loom will be quite a task! I don't envy you that job one bit...
On a positive note the receiving blankets look cozy and warm....just perfect for a new family addition.

Another great post with some lovely pictures of your looms and how you cope with them.

Looks like some major maintenance to be done though !

Book marks will feel very tiny after all the blankets and shawls !