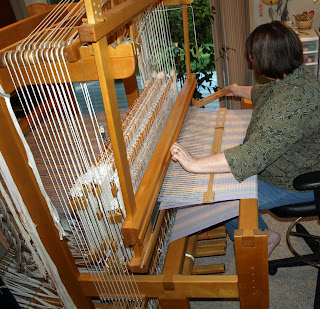 My dear husband, under the disguise of changing a light bulb for me, took this sneaky picture of me weaving on my last project,  Ethan's receiving blankets, on my large loom I call Emmatrude. I would have liked to have pulled a comb through my hair... oh, well! The project width was thirty six inches wide which was an adjustment for me after narrower scarves.  It was after completing this project that I discovered the severe fraying of the 20+ cords. I knew that there was a big job ahead of me and even as of today, I'm only half way (hence the part one!) The basic fact is, the loom is a tool and has moving parts so maintenance is not only required but to be expected.

{I can recall weaving on table looms and small floor looms at round robin weaving workshops that were in terrible shape. It just never seem to occur to their owners to tighten nuts and bolts, repair or replace parts or even clean them! One teacher I know would always ask someone to bring along a weavers tool kit for just these looms that inevitably appear. Don't be intimidated by your loom! Learn how it goes together, how it works and keep it in good shape. It will give you a great weaving experience back for many years! Not to mention increase its resale value...}


It has also been awhile since I last gave the loom a rub down with an oil and normally try to do this every two years in the summer time so I can have the doors and windows open for ventilation.  I think its been five years!  Okay, its time.

I have the new cords in hand from Woolhouse Tools. I'm keeping the older cords on treadles  1 and 2 and treadles 15 and 16. They haven't been in use much and so just fine. Its the centre 12 treadles that must be replaced with new. Now to be fair, not all cords are in bad shape. I'll be keeping many of them and using them as repair cords for the future. 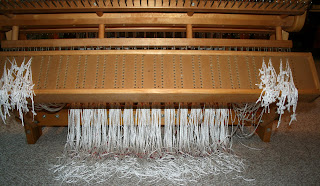 Here you can see I have pulled the pegs and dropped the centre 12 treadle cords. At this point I thought I could leave the two treadles on either side in place so they are still set up. 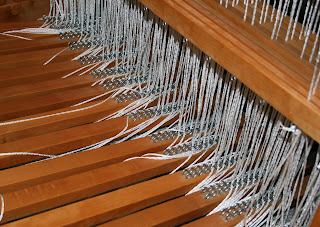 Here you can see that I have removed the back four shafts worth of cords from the  loom. This is where it gets a bit complicated.  The cords on the back shafts (9 to 12) actually have less distance to travel to the back of the loom, so they are overall shorter than the centre four, then the front four shafts. Then you have two cords for upper and lower lamms and these are also different lengths as one must physically rise further to reach the upper lamms.
So I must take the cords off the back four lower lamms first and then the upper lamms in sequence.  I used gel knee pads and a large pillow and lay on the treadles and just got busy. Short cords? throw in one direction... long ones in another. When all done, get up and stretch... and then bundle the cords and mark what they are for length and where they came from.  Take a Robaxacet for the back and get back under again.

Then I moved to the centre four shafts (5 to 8) and did it all over again.  By now, being under the loom for long periods of time with my thoughts, with great tunes playing on the iPod player, I came to realize that  putting the cords back on must be done one shaft at a time, upper and then lower lamms, just like when it was when it was initially set up. The two treadles on either side with all their cords would make that process next to impossible to do as there would be a sea of wood and eye rings and the chance of placing on the wrong one very likely... and very hard to correct. Okay, they had to come off too and also in the  specialized size shaft groups.  *sigh* 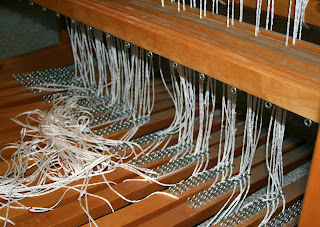 So, here you can see I have taken each of the side two treadles completely off (and marked with which shafts they came from and their lengths for going back on later)  I've now  completed the centre four shafts and only have the even longer cords for shafts 1 to 4 left to do. Bruce came and spent some time under the loom at the front and took most of these off.  Then we were done! 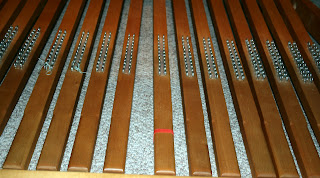 The tied yarn on a couple of eyes in this upper picture show where two cords frayed almost right through. We're thinking there must be a metal spur or two there so will be replacing those eyes for new ones to be safe. 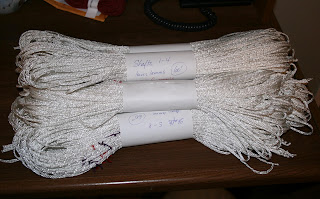 Here are the six bundles of the centre treadles all trussed up and ready for storage. The badly frayed cords were removed and the good parts of those cords can be cut and used for tie up cords on my Louet. Mainly they will provide a supply of repair cords for the 20+.

Now its time to think 'spring cleaning'. The loom was thoroughly vacuumed and wiped down with a damp cloth. I used Murphy's oil soap on the front breast beam and the top beam of the beater. There was a lot of dirt and oils from my hands, despite hand washing! I dismantled the shafts and upper lamms and bundled the heddles from each shaft.   They went into the laundry tub for a dunking and came up much brighter! The water looked like tea!  Here they are drip drying.... 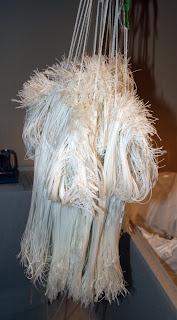 They dried quickly and looked brand new instead of a dingy grey. 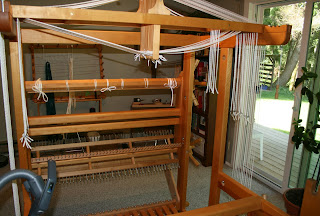 The heart of a loom is its shafts and with them gone, it looks quite gutted!  I have left the lower lamms in place and hope that when it comes time to re-cord the loom, they aren't in the way. If so, they have to come down too. I'm trying to reduce some work where I can!

We finally got a couple of nice warm breezy days so I opened everything right up and oiled the shaft sticks and upper lamms. 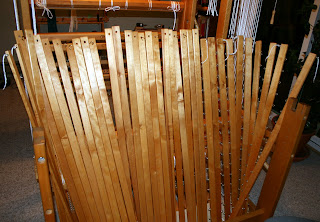 I have an old towel down on the floor and stood the newly oiled parts up against the front of the loom to soak up the oil. The glow is beautiful and they visibly brightened.  I could imagine the main portions of the loom enjoying the coming treatment too! 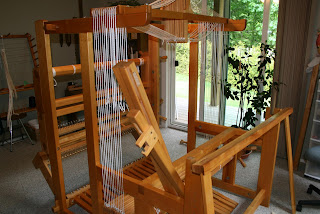 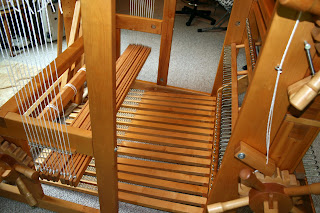 In these two pictures, with the exception of the cloth beam and the sectional rakes where warp or cloth will touch, all have received an oiling,  and then a further  rub down to come to remove the excess oil.

So I'll end with where I am as of today. I've made a start at replacing the shafts and heddles back into position. The heddles go back on nicely but they are all criss crossed and I'm separating them. That should keep me out of trouble for a while. 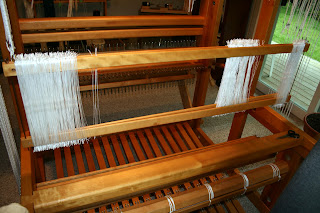 Looks better already doesn't it? I will hang only the first shaft upper lamm and do measurements to have them all hanging in their right positions, six inches apart. This is to maximize the size of my shed by allowing proper movement of the treadle from its resting place to the floor when depressed.  Once I'm into replacing the 20+ cords, the balance of the upper lamms (and lower lamms?)  will go back on in alignment with the first shaft and line up like little ducks. Time will tell if I can leave the lower lamms in place or have to take them down and add back in one at a time. At this point, it's a minor detail!

You do realize that this report is based on *many* days of chipping away at the elephant.... right?  Part two will no doubt take equally long. There is no hurry as I do have another loom to play with :)

Part one was fun!! I can hardly wait to help you with part two. Call me when you're ready to get in there and re-string her for the next projects.

...well, Emmatrude certainly does look quite pleased with her spa treatment! ..and you know, I never tire of seeing this gorgeous loom!!! What a lot of work, Susan; but certainly well-earned by this loom. I appreciate your documenting your process. I'm sure I will come back to these pages for reference many times over the years. Bruce is certainly a 'keeper'!!

Susan, Emmatrude is looking lovely with all her spa treatments!

Since you had to replace those cords anyway, it made a good reason to carry on with the rest of her! Now can you come and do my old Gertrude #27, please? She's easier because she doesn't have the back tie-up system nor as many treadles. Not even the floating lamms; just the side-hinged ones. No? Guess I'll have to do it myself then some day soon. Poor thing is getting all dried out. ;)