For The Men in my Life

I have been busy beavering away at a project, trying to make a deadline! I'm a slower treadler these days as my right foot is being cranky. I'm waiting to see a surgeon to fix what arthritis has been doing.

I had shown you little peeks of what was on the Louet Spring last post.... and now the scarves are finally done. One is on its way to my (slightly younger) brother who is about to celebrate a significant birthday!  I saw at Christmas that he's been wearing a ratty old chenille scarf I made him years ago and I thought him well overdue for a new, spiffier scarf. He works in the offices in downtown Vancouver where the basic office wear is black...so something to go along with his winter top coat. 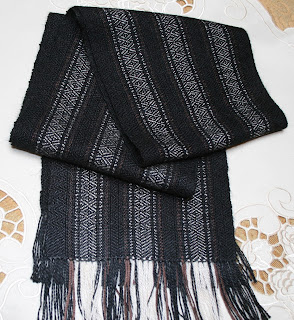 The warp is a 70% alpaca and 30% silk blend...with the small brown stripes being  merino.  Its a four shaft twill I found in Anne Dixon's book:  The Handweaver's Directory. It was a simple four shaft threading and a standard twill tie up. Quite the opposite to what I normally weave!  I found when I was treadling that my feet kept on looking for more treadles than the four tied up. Even after finishing the third  scarf I found I still hadn't adjusted and wanted more treadles.  I'm a structure weaver... I love the complexity.

The scarf in the picture was woven with the same alpaca silk blend as weft and its super soft. It will be nice and warm while my brother waits for the rapid transit to work.

Now the sett was a bit tricky. I have very limited experience with alpaca and so I relied on doing wraps on a ruler. I got twenty wraps into one inch and so I thought going for sixteen epi might work for a twill. The first scarf I wove was wider and was more weft dominant. It was a 2/2 twill and I was going to remove the weft, re-sley and try it again, but my husband saw it as asked me to keep on going as he really liked it!  So... I did. 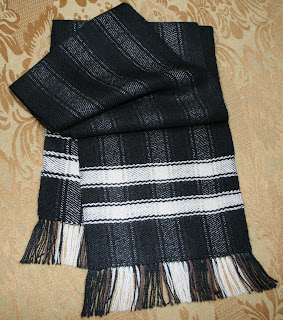 Bruce loves it and has already worn it  twice. He likes it the way it is. Now, me, as the weaver wanted to make changes and produce a more balanced twill.  Its an interesting lesson that sometimes what we want isn't what the customer wants... 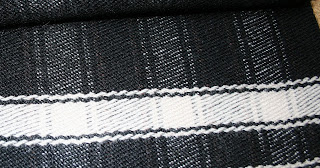 Here you can see its weft dominant and so with that, I cut off the scarf and then re-threaded for a broken twill, then resleyed, This time the sett was 20 epi.  The scarf for my brother is the second one woven  and I was much happier!   I ran into a difficulty with scarf number three. I ran out of alpaca weft!  Oh, I could get more but I want to reduce my alpaca stash and  run down my current stock of alpaca. (I have lace weight alpaca in soft cream but that's all). I dug through my stash for alternatives and my options were actually few. I have 20/2 and 30/2 black silk but they were too fine for the warp (which is 875 yards for 3.5 ounces). I end up going with 8/2 black tencel as it was a better fit. It also seem to polish up the look and help with drape. So its warm, elegant, with luxury fibres and beautiful drape. Works for me! 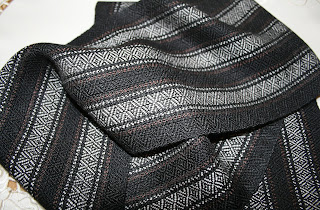 This scarf has a bit of sheen to it and a cooler hand. I quite like it and think it could be worn by either gender. Its going in the Etsy store. This way when it sells it will cover my costs for my materials for all three scarves. The weaving time? well you know how that goes....

Speaking of selling, I have been ferreting out odds and ends from my studio and selling them off. A few books here, some yarn there and the odd piece of equipment. It all adds up.  I'm liking the extra room in the studio and every few days will open up a drawer or go through a shelf and see what can go to a new home... or go in the garbage.  I swear this stuff breeds after the light is turned off for the day!   I must also say that its quite liberating as if something is gone, then the pressure to use it, or learn a new technique is gone. Fine tuning your focus! If I'm unsure about something, I keep it....

There are some new additions to the studio coming and are on the way. I've parlayed my old stuff into new shiny stuff. (I feel like I'm channeling comedian George Carlin and his Stuff routine.... (warning: George uses cuss words. Gosh, I miss him and his steely wit!). Hopefully it will all arrive in the next week or so... and I'll share then.

Finally, the Woolhouse Tools countermarche threw me a curve this week. I got my new warp on and when I stepped on the treadles, the shed was awful! Its all out of whack and so I must reset the cords again. When I have the locking pin into hold the jacks in place and the treadles raised and blocked is the time when I can pull each cord and set the right spot for the pins. Any difference even by one or two slots can make for a mess at the shed so I'm working my way through them. 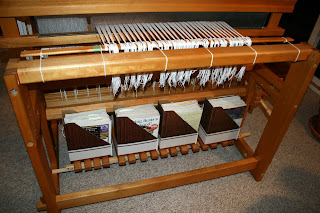 As you can see the towel warp is in place and waiting to go!  So why am I having to do this so frequently? The cords are brand new this past fall and I've had two warps on the loom. The tie up's have been different and so different cords are being used each time. While texsolv is not suppose to stretch, it does a wee bit. It seems to be one centimeter (1/4" +/-) or one slot in the cord. It will take time to get each one settled into its spot and so "maintenance happens". (The benefits of this system still out weigh the work!)

I've been catching up on my samples and record keeping and also doing some future project planning. How are you keeping busy in these weaving days of Winter?

Your men's scarves are lovely, Susan. It always comes as such a surprise to me to move from fine, firm fiber to soft and fuzzy fiber. More of an adjustment than i ever quite expect. It's good to see that you are having some time to putter and clean out as well as accomplish your weaving. I know I will refer back to your pages often when it comes time for my Gertrude to arrive. I always love to see what you have going...

LOVE the scarves, Susan! I'm eagerly waiting to see what cool new toys you've got on the way. :) And I can tell you right now, I am NOT a patient weaver, so a "fiddly" loom that requires constant "tweaking" would drive me crazy (and drive itself out the door)!

Good Morning Susan - your men's scarves are beautiful Glad to hear Bruce has one for himself! Sorry to hear you are having "foot" issues, hopefully those will be "fixed" soon. We are day two of a major storm, I find I can't settle to do anything. I have lots to do, just can't settle. We are being advised to stay off the roads, so that's not an issue. Thanks for the tip about the cords stretching, might be one of our problems at the weaving studio on a loom we put new cords on. Weaverly yours

Wonderful scarves! I especially like the third one. Good idea to go through things, get rid of some possibilities that may never be done, and narrow the focus. I really need to go through things and organize my studio too. You're right...things seem to multiply!

Beautiful scarves. I think my favorite is the one for your brother. Lucky fellow! And I miss George Carlin too. At least you didn't link to the 7 words you can't say on TV, but these days I suppose you can....on some stations.

Thanks to everyone for the comments. Great to hear from you...

DebbieB: I'm chuckling here 'cause the whole point of weaving IS patience....so if you don't have it now, in time you will. ;)

Love the scarves Susan. They are perfect for the men in your life. Great colors and pattern choices.

Hello, my Dear! These are great! I've come to you from The "Grow Your Blog" party...it was over before I knew about it, but it was so nice of Vicki to leave the list up! Anyway, I always welcome new blogs to enjoy, and yours is delightful! I am now following you ~ please come and visit me if you get a chance!
So nice to "meet" you!
Hugs,
Anne