Well, the snow is gone... melted away in the rain and the early spring flowers are making an effort to resume growing. We have crocus and snowdrops. The greenest things in the garden are the weeds of course.  I've seen hummingbirds, swans and geese all back at the Somenos Marsh.  I think I even saw a red wing black bird today as well.

For my readers stuck in snow drifts, take heart... Spring is coming for you too!

I saw my surgeon this past Monday and its now official that my left knee replacement will be first up and right hip will be second some months later. So the knee surgery will be approximately  late summer or fall.  Now if my knee can hold out for some treadling until then, I'll be a happy camper!

We took a couple of days to go and visit my Dad who is *still* in hospital. That's three months in there for him now but he does seem to be slowly making small improvements now. 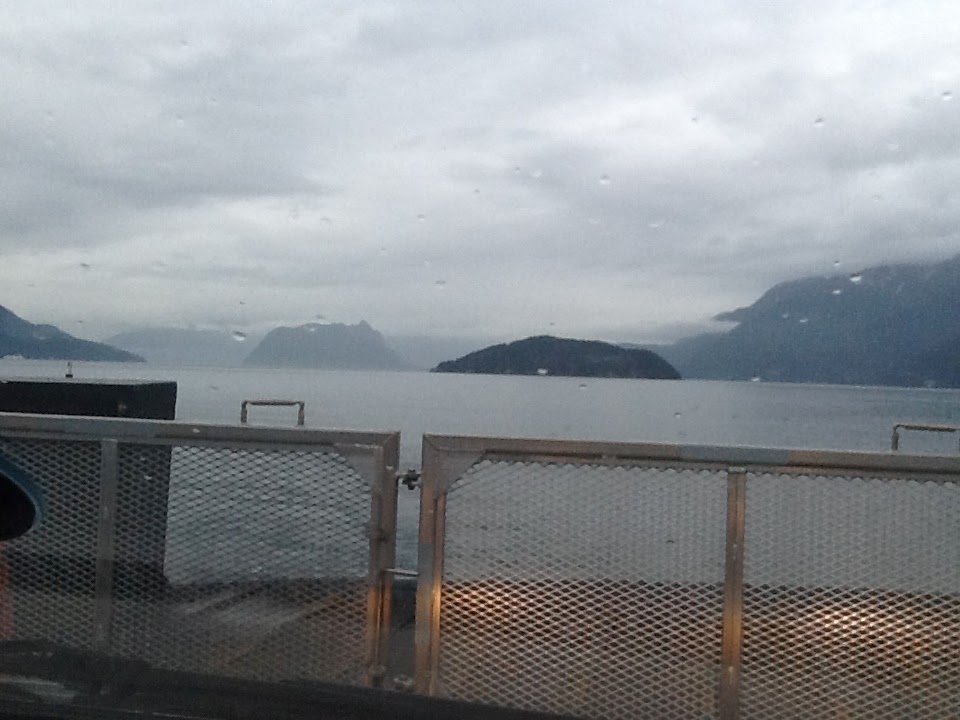 We had an upfront view of things on the return trip! This is a view up a cloudy Howe Sound from Horseshoe Bay. We're cosy and warm in the car and the ferry turned left soon after this was taken and headed across the Strait to the Island.


Another change for me is a new computer and I have been  learning the ropes for a new operating system on my new Mac Air.  Its amazingly thin and light weight on the lap, which is good for my cranky knee. No moving parts and so no overheating issues too. While I still have alot to learn,  I am enjoying the change! I bought a visual guide book to assist me.  I still have my old Dell laptop for the PC stuff and a ton of my pictures stored there! So this blog post is a joint venture between Apple and Dell. I'm happy they 'hand-shake' well! 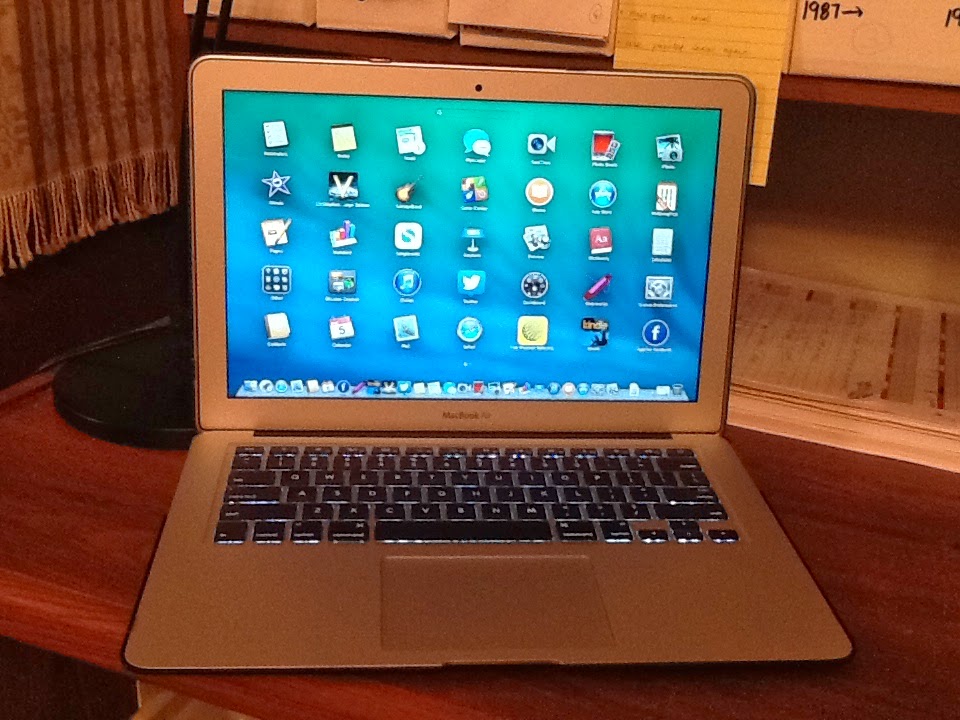 I  have my priorities straight as the first program loaded was Fiberworks- PCW! I have a new manual to read up on that too now... A big thank you to Bob at Fiberworks for his help! 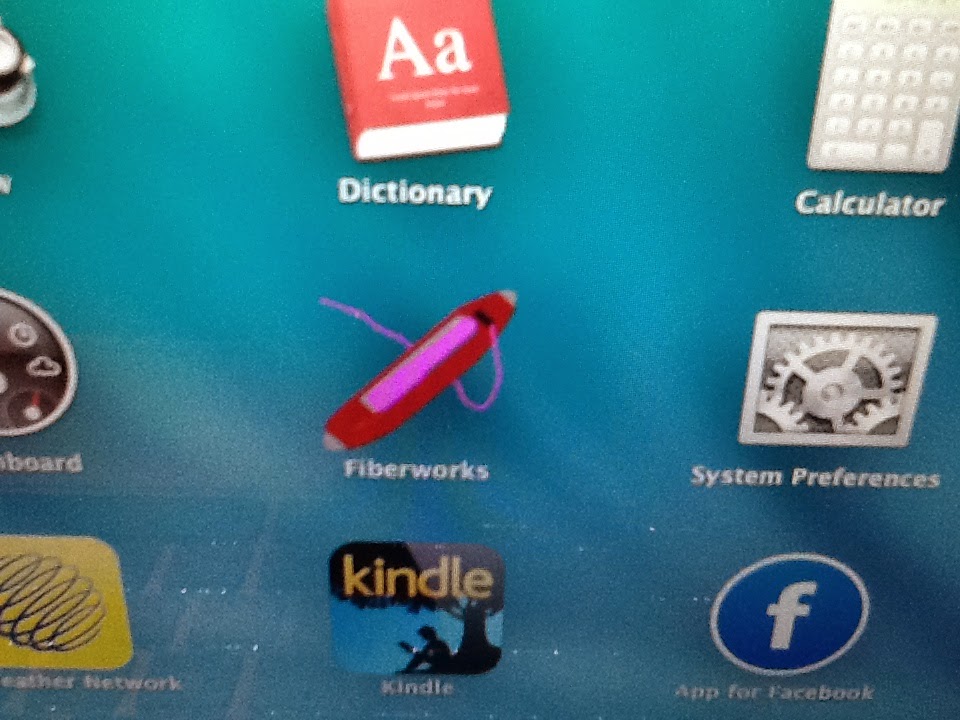 There has been some weaving going on here.  The Woolhouse Tools loom is all dressed up with my odds and ends coloured 8/2 cotton towels as shown in the last blog post. The loom has now been additionally advertised up and down the Island, Sunshine Coast and Vancouver and Kelowna area now.

Meanwhile on the Louet Spring.... is Italian Silk (from Diane Sanderson's Silk Weaving Studio) in a soft gold for two shawls. I bought it a few years ago when we were there visiting on Granville Island.  I'm using a 12 shaft 12 treadle draft sent to me by Gudrun. 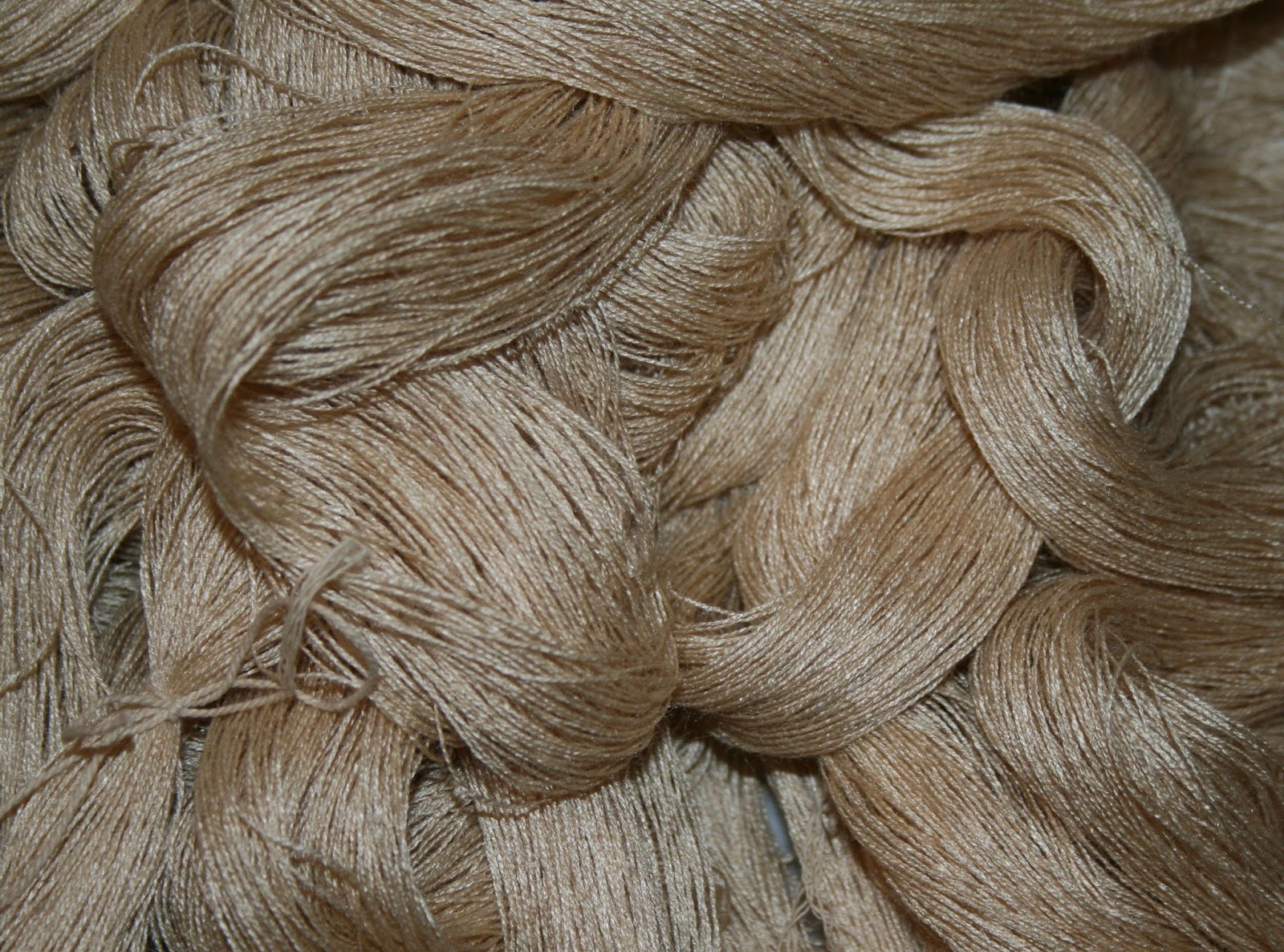 Looks nice here doesn't it? Well, trust me,  its nothing but trouble just waiting to happen!   I set it up on the back beam and placed the ends into the built in raddle, sett for 36 epi. 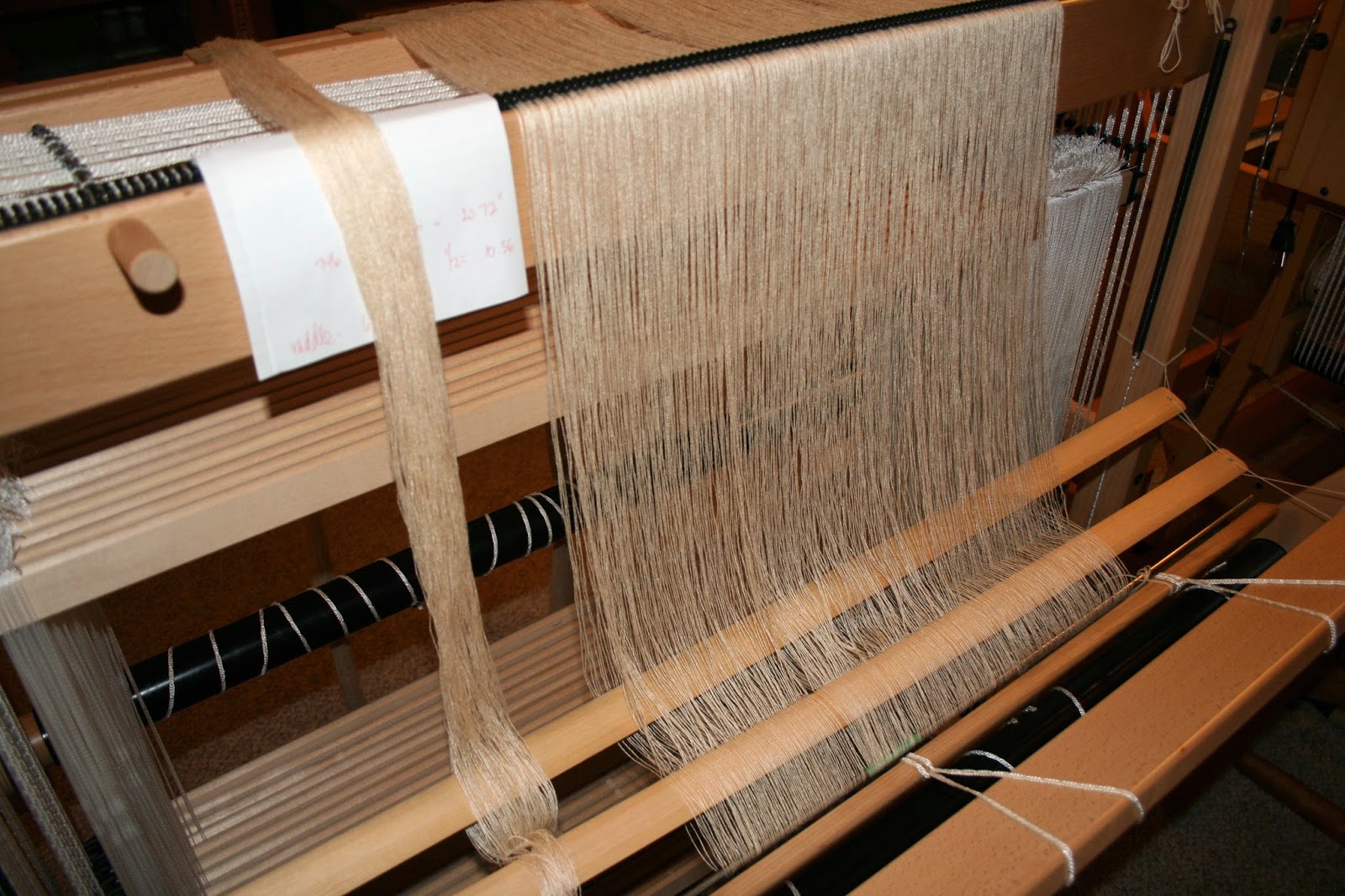 I enlisted Bruce's help with winding on and its just as well I did. We had a nice long afternoon together "inch-worming" the warp on.... literally inch by inch! 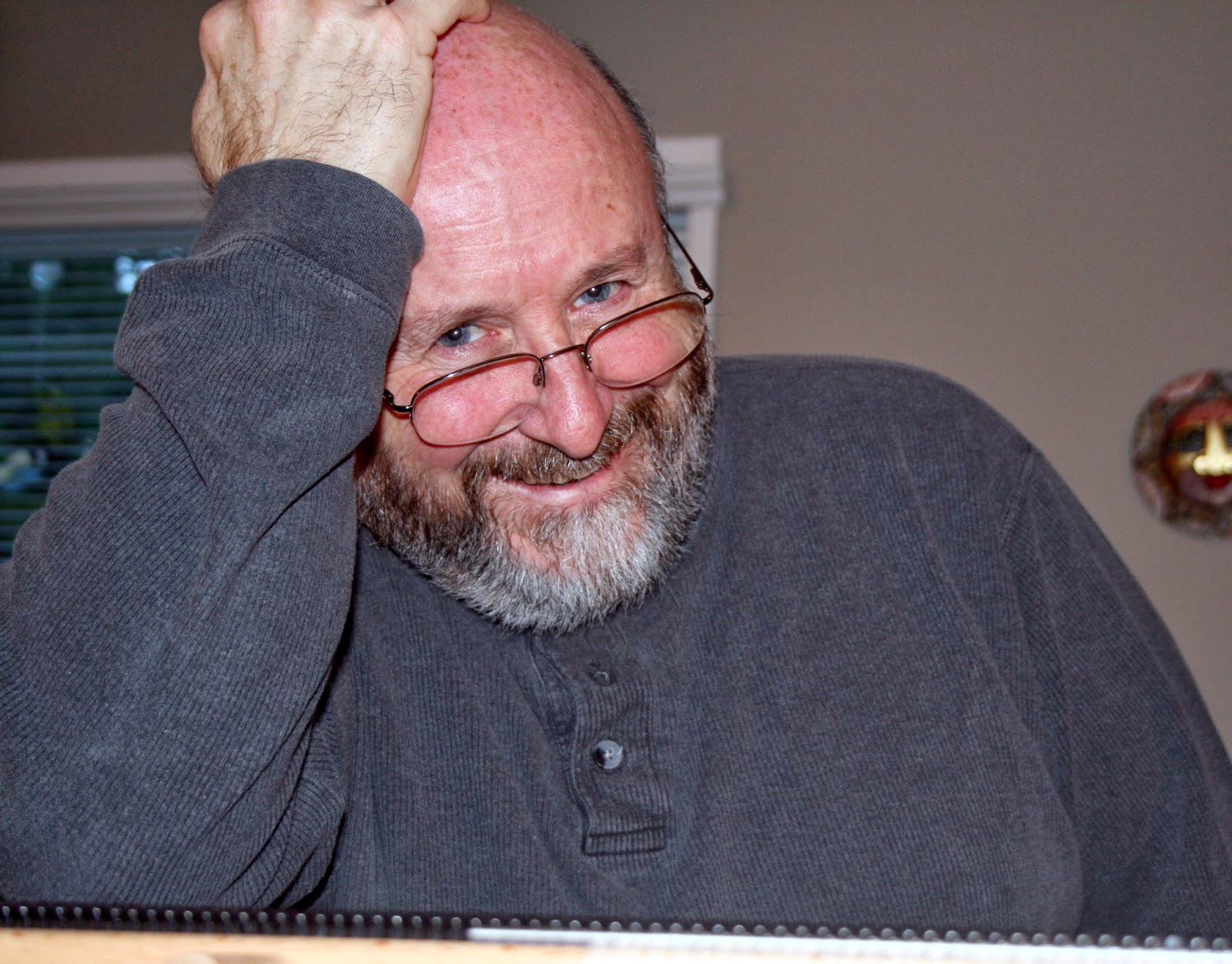 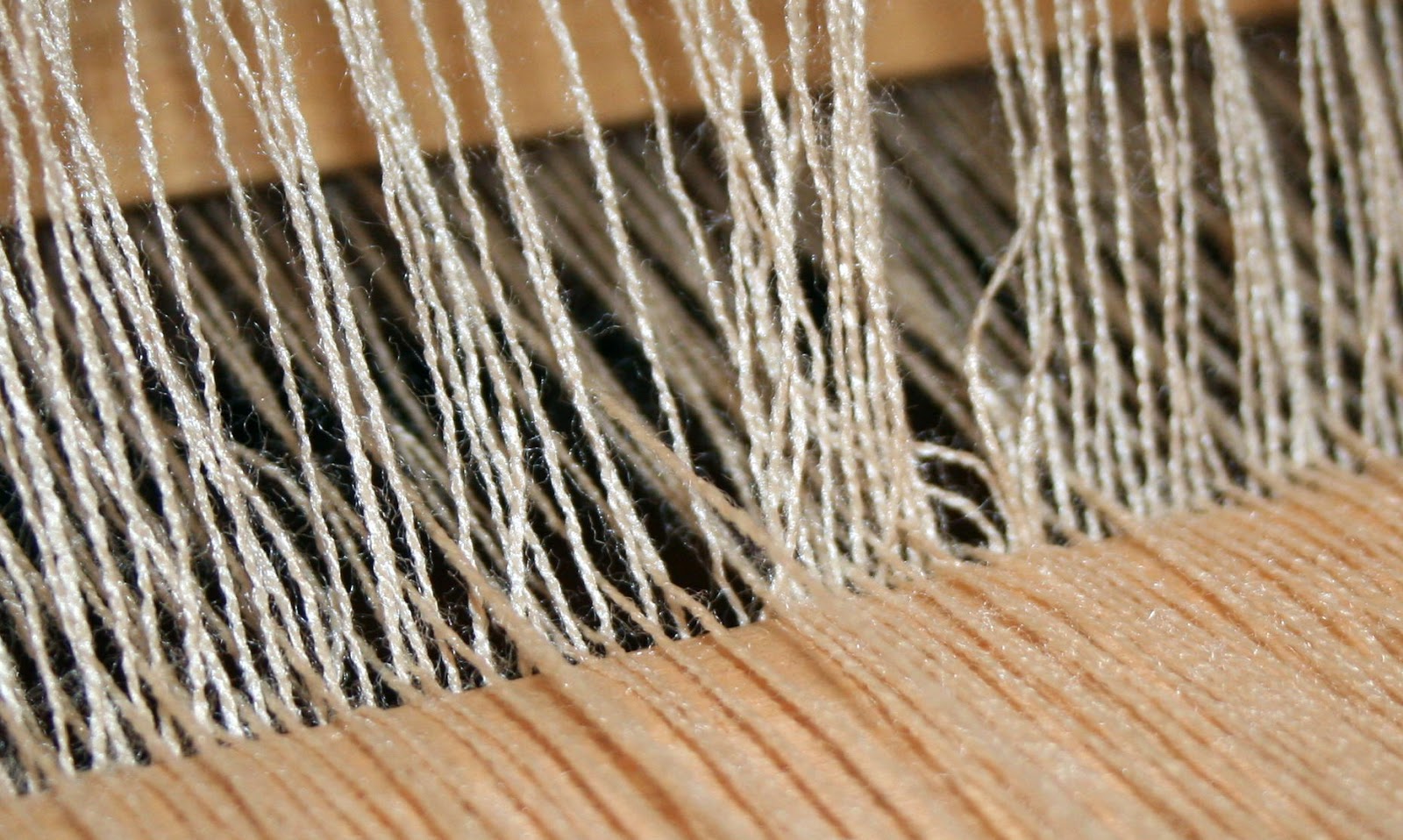 The fuzzies on this silk grabbed onto each other. I call it halo'ing. Bruce had to maintain tension and clear the raddle slots and I wound for an inch or two and then used a needle to work apart the warp ends, then pick off fuzzies for all eight yards of this warp! We had a great chat, sang some songs and had more than a few laughs along the way! 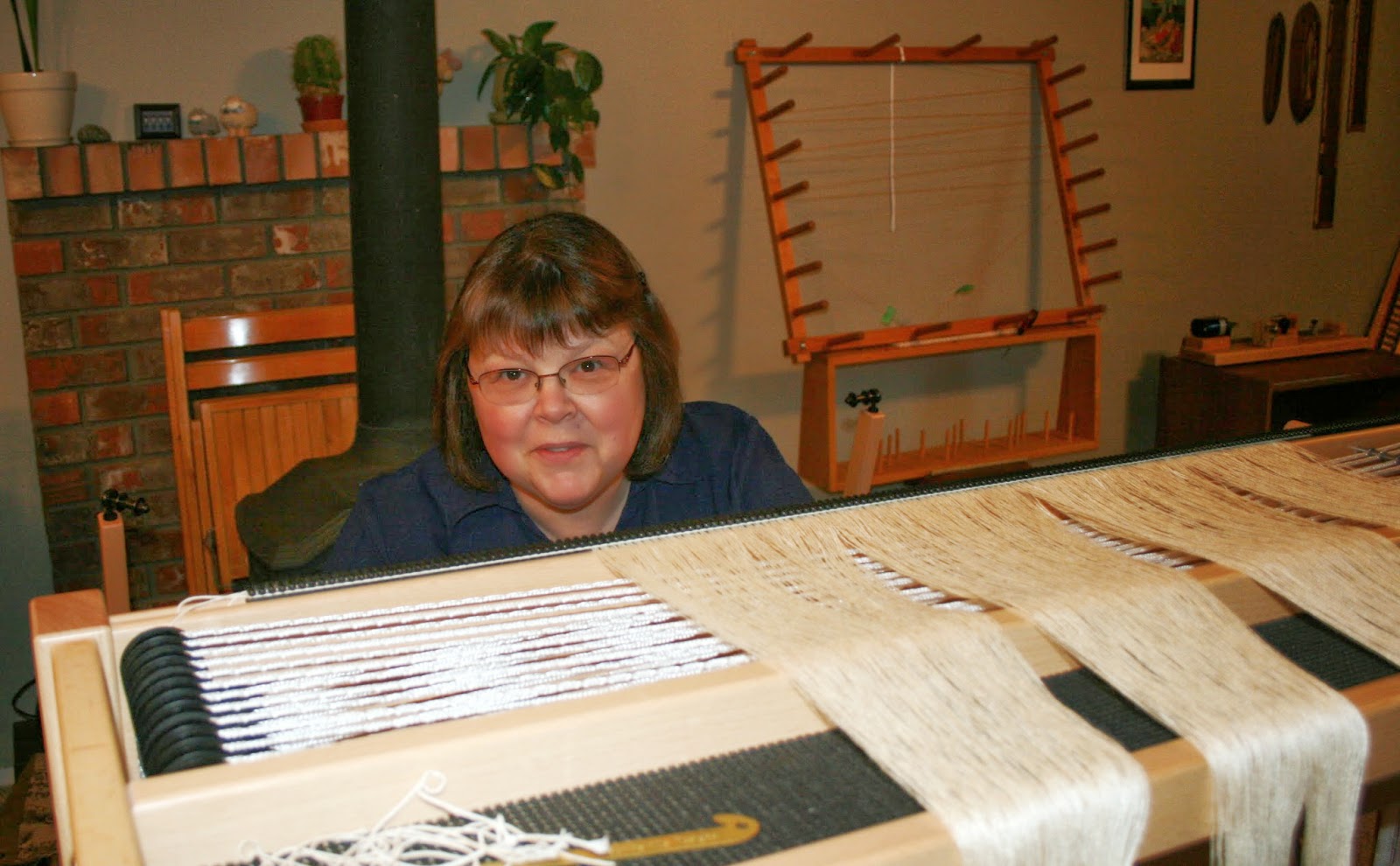 So finally I got the weaving under way and here's the first edge of the first shawl. 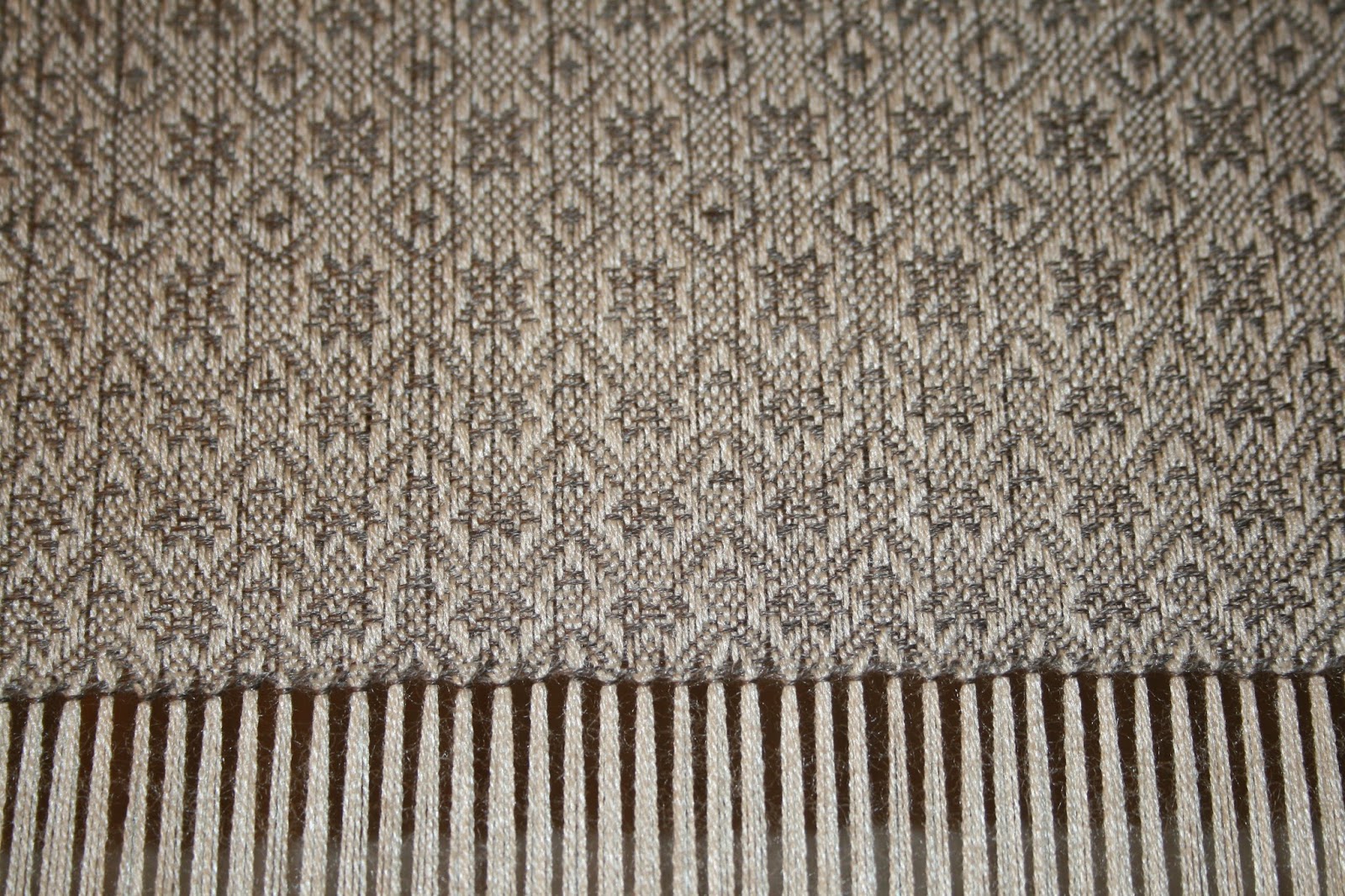 The weft is a silk yak blend in a beautiful silvery beige. Its the equivalent of a 30/2 for size and weight.  I will go into more detail in my next post on draft and project details. I plan to cut off the first shawl and finish it while weaving the second. I'm trying a special effect with the treadling plan and hopefully it will turn out as I planned.

This will be my last full twelve shaft draft and twelve treadle until after my surgery is done and I'm stronger again. The weight of the shafts and treadles is too much for me now.  So there will be more eight shaft projects﻿ (and perhaps even less?)  in the near future while the knee holds out.... or is that hold on?

Hope that your surgery happens sooner, not later.
cheers,
Laura

Thank you Laura!
There is a shortage of anesthestists and so it close to a year on the official wait list now ( not including all the other time just waiting to meet the surgeon!)

You have to go in and start the process well ahead of time now because by the time you do get in, the situation can be very well advanced. That causes many other issues too. My knee was a victim of waiting too long for my hip!

My dear Susan,
A knee and then a hip! Gosh! Anything I can send along to help you pass the recovery time?
The silk and yak is gorgeous, I love that stuff! Your weaving is so inspiring, and I wish you the very best luck with the surgeries and best wishes,
Alison

The weaving is so gorgeous!!!! Hope surgery is easy and not too disruptive. So nice that your husband is helpful with the warping. I used to rope my boys into helping and they hated it! :)

Beautiful silk, beautiful draft! Oh, my, the fuzzies in the warp - I feel your pain! I wish you an earlier surgery date too.

How are you liking Fiberworks? I've been eyeing it myself...

Thanks Cait and Debbie...

Debbie : I have been using Fiberworks for some years and enjoy it. I have been using the PC version and so now with a new Mac I will be using their Mac friendly version. I have taken a quick tour and so far it seems very much the same but with buttons and files in different places. I can recall designer / creator Bob saying the mac version will have new features and the PC folks will be waiting for them til the next upgrade is out. Fiberworks does enjoy a large following and for good reason! You can get a demo version ( I recommend sIlver for you) and it does everything the program does except print and save. If you like it, then pay and get the activation codes from Bob via email. There is an onboard help manual or you can order a copy if you like to have a book to flip.

I consider it an important part of my studio and weaving.... And with my surgery to come, I plan to do a lot of project work for when the knee is ready to treadle again!

Wishing you well on your surgeries--they do not sound like fun at all! Your troublesome warp is gorgeous with the weft. I am in awe of so much loom as I have only ever woven with 4 harnesses. It looks very intimidating, but your work is lovely.

Whew! Good thing you have such a patient & helpful hubby! I live alone & so beam alone, and I don't know what I would have done -- couldn't have tolerating wasting that silk, but would have had to walk away many times.

As always, your work is gorgeous.

Hi Susan,
Love your work! I saw a book called Color Exercises for Weavers on your Etsy shop. Is it still available? If so, I'd like it and am wondering if I could come and pick it up. I'm on Salt Spring and have a trip over that way next Thursday.
Thanks,
Lori

That should be just fine. No plans for that day so will be home.

Let's talk okay....email me at weever at shaw dot ca

Thanks for the Fiberworks recommendation, Susan - I'll get the demo and take it for a test drive!

Hi Susan,
My beautiful scarves and towel arrived today. I am thrilled with them even though I had started out looking for something else entirely. I needed an answer to a rep weave question about spreading 4 H Rep to 8 H's. I had called a guild member who is our go to person for all things rep. I decided to go on line and check while I waited for a call back.
Lynnette mentioned on her blog you had told her how, but didn't try it so I went to see if you mentioned it . I received the call back from Lestra and got my answer but I loved your blog so much I went back and read it all from the beginning.
By the end I just had to have some of your weaving. I collect scarves and towels from weavers I have taken workshops from. I learned so much from you I felt 2 scarves were needed.
Thank you...Cyndee

Hi Susan,
The scarves and towel arrived today. I enjoyed reading your blog and seeing them come together on your loom. They are even more beautiful in person and I am thrilled.

I wish you the best with your knee. I had both my knees replaced in 2009. If you have PT available to you, have it now as well as after surgery. It helped me get my range of motion back.