Say hello.... and good bye to this!   I just cut off the first scarf attempt this afternoon.   I wove roughly 30 slow inches and in that distance, the floating selvedge broke 8 times.  Its just not worth my time to keep on fighting with it.

So I'm resleying and will give the second scarf a go for 10-12 inches and see how it behaves.  Its been warned and the scissors are on stand by.   There will be some changes made to the pattern and how I plan to weave it so we'll see how this pans out. It either will or it won't.

I had such a good time weaving the recent Royal Stewart scarves and had hope to continue the fun but this has been a big disappointment.   I told my hubby it was yet another learning experience and today it was all about cutting your losses (literally) 😁✂️ 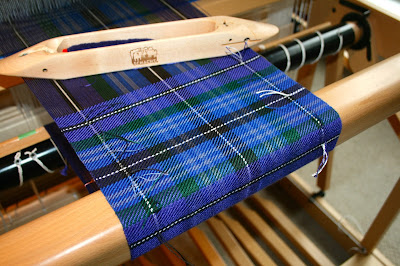 So the Megado loom has a new warp on it.  Eleven yards of ring-spun cotton that fought us tooth and nail going on to the loom.   It was a bit awkward as it had a lot of over spin in the yarn and so it wanted to curl up and then cling to its neighbour.   I have 3- 3 pound cones of it so future warps will be shorter and hopefully sweeter.  Nothing much has happened there since beaming the warp as I went onto other battles on the Spring loom.

I have mentioned before that I have issues with my feet so I have decided to make some changes in my other toys. I have my Louet Victoria wheel up for sale at Etsy and was nudged into buying a Hansen mini spinner a bit sooner than I planned due to Hansen having a brief sale last month I just couldn't say no to.   So I have been playing with this little  machine this week: 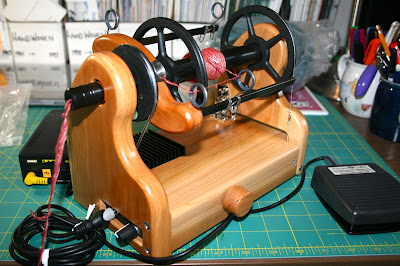 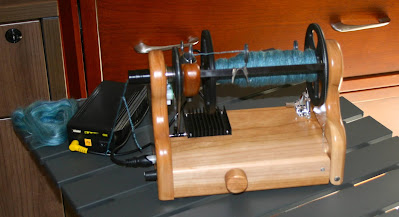 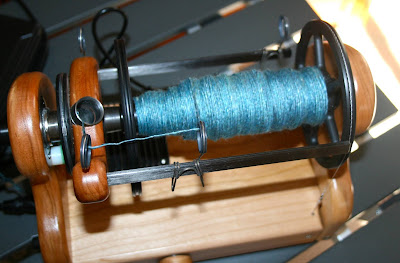 As you can see,  the introduction is going quite well and its  a lovely experience once you get the hang of the spinner and the foot pedal. The bobbins are quite large and I have put on an orifice reducer. I have a 12 volt battery pack and a folding camp table and so we're ready to take the show on the road when the pandemic is finally over. I bought a padded sewing machine carry bag with wheels and a telescoping handle to protect it and all the gear.  It even came with a plug to use in the cigarette lighter in the car.    🚗 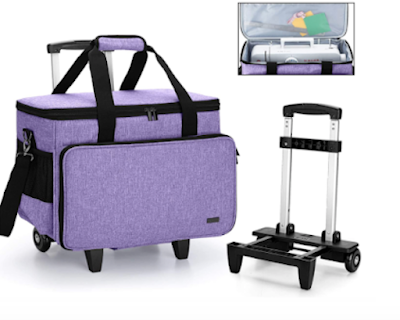 So besides the spinning wheel, I have been downsizing and selling off bits and pieces like weaving videos, books, yarn and a swift. I have come to realize that I'm just not going to use all this stuff I have accumulated.  Its quite liberating to move it all on.    Its leaving one parcel at a time.... 📦
Other news that also speaks to cross roads and changing the future..... is that my daughter graduated with her Masters of Arts in School Counselling last Sunday and had a new job just 15 minutes from home by Wednesday.  Its the result of much hard work and study and 4 years of her life (their life as she is married) and we are so darn proud of her! Carrie will be working with elementary school kids and she couldn't be happier! 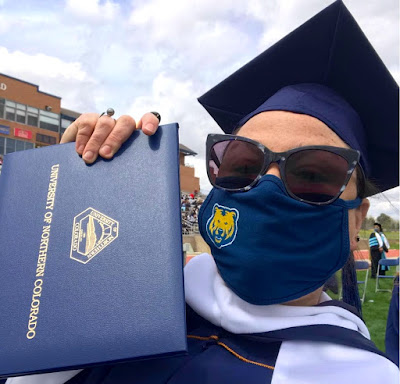 We watched via live streaming and the ceremony was held outdoors, with a stiff wind blowing and a pause for a thunder storm.  It was a masked  and socially distanced event and the sun appeared from time to time.  I'm certain that there is a very large smile behind that mask!    I know we sure did!  😁

Congratulations with your daughter's graduation!