Winter hit here in a hurry.   We were enjoying a regular fall day and the next morning we woke to snow and rather cold temperatures.   It was a shock to us but more so to the trees and garden who were still wearing leaves and in some cases, flowers!    I cut these little rose buds the night before to enjoy in the house and good thing I did or they'd be frozen stiff the next morning. 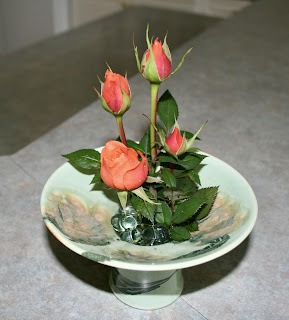 The snow is gone now thankfully but now we are wrapped in fog and its been here for several days now.  I couldn't see my neighbour's house last night. Its eery and quiet.     It also means there have been delays to getting some pictures taken for you.
Eventually, it brightened up enough to try my hand at fog photography.   Too much direct sunlight saps the colours out of the subject and so I thought this might just work.... 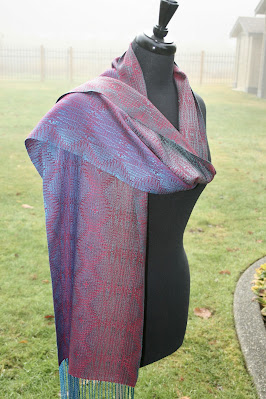 This scarf warp was a blending of five colours of solid 8/2 tencel shades: Ming Blue, Aquamarine, Grey Blue, Greyed Teal and Dark Teal.   I used the gradation feature in Fiberworks (for Mac) and after some tweaking, I wound the warp one thread at a time.   I find it relaxing and quite enjoy the process. Seeing the changes build on the warping mill is a treat for the eyes.   This picture from its early start on the loom shows the warp colours best. 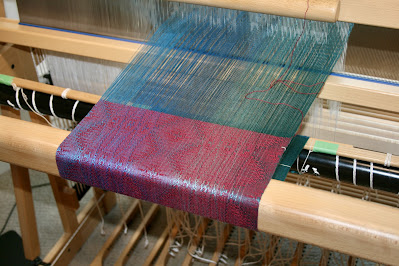 The weft is 30/2 silk from Treenway, dyed in a colour called "#42-Velvet Opera".  It was left over from this project.  Its pretty fine stuff so its a slower weave working through repeat after repeat. 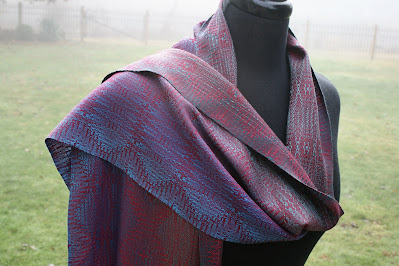 But the results are lovely. Its a fine cloth, with a very soft touch.... its as light as a feather!   As you can see, the base warp colours still manage to make their presence known.   The burgundy /wine colour works with the blues on one side and also the teal greens on the other.  This scarf is called Summer Wine.  🍷🍇 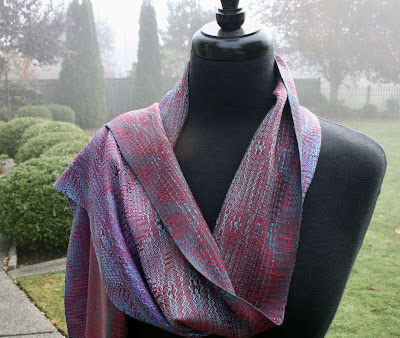 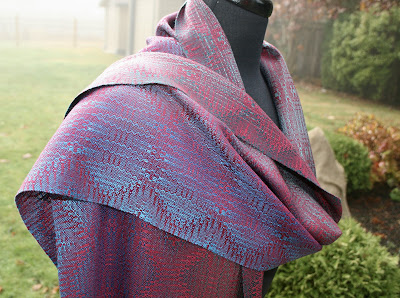 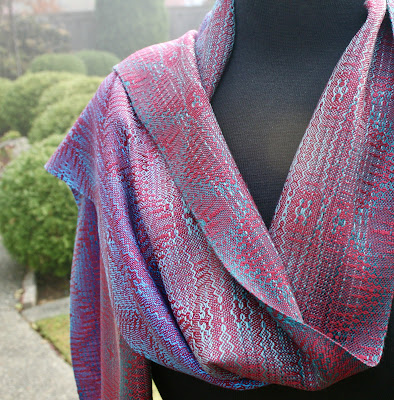 This picture is my favourite of this bunch.   I guess they could be brighter but sunshine would have drained the colours away.
So.... what to choose for weft for scarf number two?   I had some criteria set: it had to be silk, it had to come from my stash again, and it hand to shake hands with all the colours in the warp.     So I checked my Itten Color Star for a nudge in the right direction. Then I got digging through my silk bins....    I found an antiqued apricot 20/2 silk I bought from Etsy shop "Sericin" some time ago. I think they may even be naturally dyed.    I wound some up and did some test weaving..... and liked what I saw! 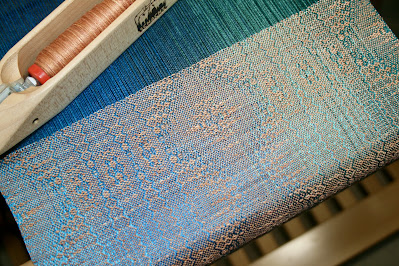 I had one weaver who saw this picture and she described it as abalone..... and so its called Abalone Shimmer. As you can see from the pirn in the picture, the silk weft is also not dyed to one base colour but it varies in tone, which adds so much more depth to the overall affect.    It also seems to help in blending the warp colours better so they seem to flow.   Its thread magic!
And the final scarf?   Well, you can see for yourself..... and like a favourite child, I took more pictures of this one than the last.     (oops) 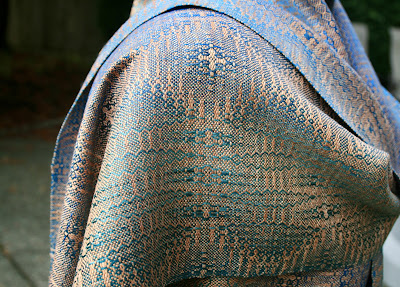 The pattern is an 8 shaft twill progression and uses only 8 treadles. To get this length of repeat is a lot of dancing on the treadles in twill runs to and fro, progressively in one direction, then another. 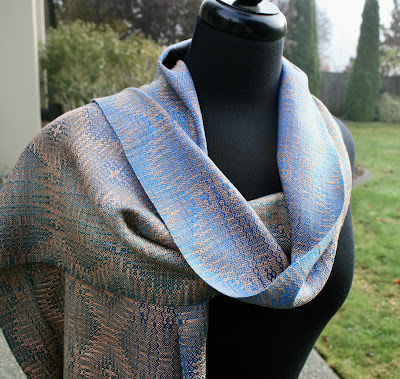 Someone thought it was a 16 shaft twill so all the dancing was worth it! 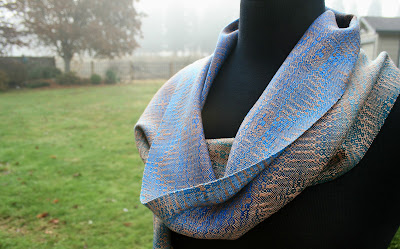 My husband took some picture of the scarves too and he took the one below which I really like.  Its shows all the nuances of colour.  I told him I was going to try my hand at photography in the fog and I think he didn't want to be left out of the experiment. 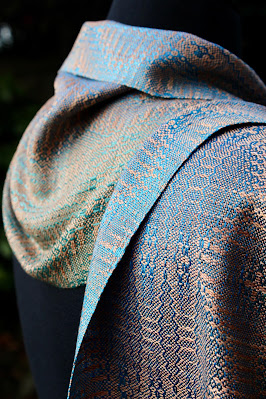 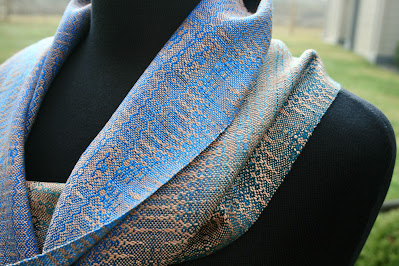 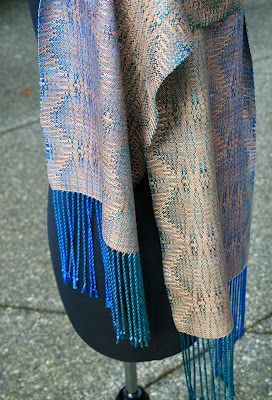 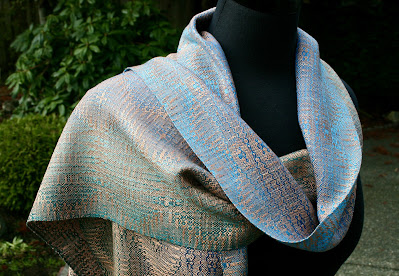 So what's happening in the studio now?
I have a single scarf in silk and tencel again on the Spring and more table runners on the Megado loom that have a 348 repeat or 15 inches.  😳    Three repeats gives you a whole runner!  Plus my legs are getting quite the work out.   They, the runners that is,  are coming along well.
I'm about to wind another colour gradation  as I really like the effect and its using what I have on hand which is a good thing.
I have succumbed to more yarn and have some dandelion yarn coming.... and also green tea.   This new use of other plant fibres just fascinates me.    Now to come up with a project for that.   I'll decide when it arrives and I have it in hand.
Stay warm.... and keep your shuttles moving!
Posted by Susan at 12:44 PM