So what's been going on here? I have been concentrating on the exchange project and cut off eight guest towels and then tied back on. I was simply running out of time so I had to do it. I picked out the best six of the eight and have been hand sewing hems and laundering, pressing the towels. Next to do is the draft and project notes for the exchange participants. Just one left to do and they are ready to box up and mail away. So there is warp enough left for four more guest towels on Emmatrude to weave off. What is taking all the time is the hemstitching. But it does look so good on the finished towels. These two are off white linen (on 2/16's cotton warp) and the towel on the bottom is 2/10 merc cotton weft: 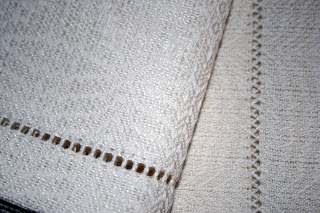 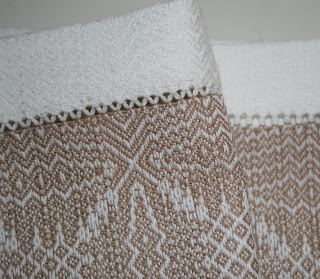 The towel on the left has 2/16 linen in a soft steel grey. There are two of these. 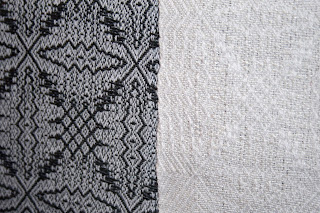 Here they are all pressed and drafts in protective sleeves... all ready to mail away. I'm really looking forward to getting the return parcel next month! 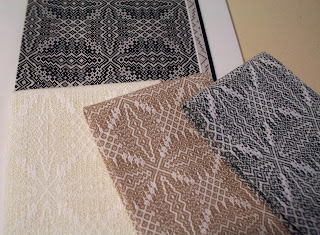 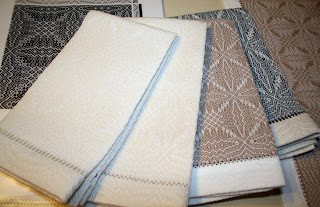 What's next? I will be beaming on 10 yards of 2/8 cotton for tea towels... and there's nothing better than towels to get to know a loom. It's a 10 shaft point twill and straight treadling run. The pattern is all in the tie up. It's small twill hearts on a colourful striped warp with the colour repeat every 18 ends and a sett of 24 epi. I'm hoping that it's not too busy and it will be a brighter warp than I normally do. I wanted something that would give me a good run of just weaving and getting in the zone. I seem to have sold all the other towels in my sale box privately and four more left this morning to a new owner. I need to have more towels on hand anyway. It seems that these mid priced items do well at any time of year. I hope to get scarves on next (tencel and/or silk) and a shawl or three as well. I also want to make a start on my second level of the GCW test program. So there is no lack of projects to keep me busy! Just a sore back is holding my pace back a bit but I'm not quitting! ( I also feel Christmas is a bit of a distraction and interrupts a perfectly good weaving season)


My back has been sore again and I've been nursing it along and back waiting for physiotherapy once more. Its not as bad as it was earlier this spring but annoying all the same. I was doing so well too.... *sigh* While I have been working in the studio I make sure that the room is warm and not doing any one job for too long and varying my position and multi tasking. Good pain drugs help too. (Arthritis is nasty and not just for old folks!)
The day before yesterday my local community held the annual 'Fleece and Fibre' Fair and I was there bright and early. Lots to see and do and shopping of course. I found some cones of 5/2 pearl cotton in a sale box and got a great deal on the six cones / six pounds in three colours. ( three of the lavender, two of the green and the one soft pink) That's one area of my stash that was a bit light for selection so this was a nice find. The seller said it was mill ends from a textile mill in Georgia that closed down. 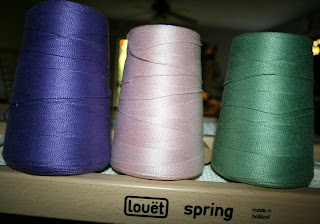 I also bought a used Woolhouse Tools weaving shuttle for $5.00. I seem to collect shuttles and don't have one of these. I don't think they make them anymore. Another good find...

The bad news? I forgot to take my camera along! Oops....
I have a quiet few days planned in the studio and will tidy up loose ends and get a warp on the new loom. Tonight, we're off for our anniversary dinner. Where did 23 years go? Time flies when you are having fun.
Posted by Susan Harvey at 10:07 AM

I love your towels!!!!!!!! Great buy on the shuttle. I've never heard of Woolhouse Tools but sure do look well made.
Arthrists is more than "nasty". Sure has put a crimp in my weaving. Hum, maybe I'll have to look into some pain meds.

Your tea towels are absolutely lovely! Take care of your back.